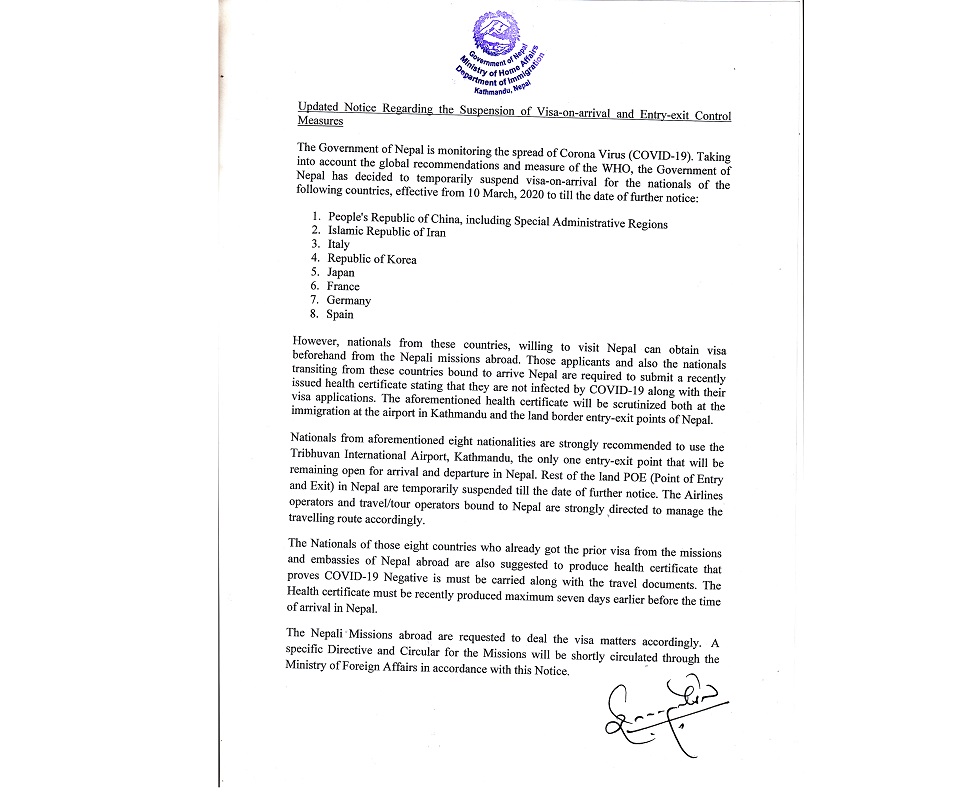 KATHMANDU, March 9: With coronavirus now spreading beyond China, the government on Monday has decided to temporarily suspend visa-on-arrival for the nationals of three more countries.

Issuing a press statement on Monday, the Department of Immigration informed that visa-on-arrival has been suspended for the citizens of eight countries including three new European countries- France, Germany and Spain.

The suspension will be effective from March 10 (Tuesday) to till the date of further notice.

Earlier, the Ministry of Home Affairs (MoHA) announced the suspension of visa on arrival for citizens of China, Iran, Italy, South Korea and Japan on March 2 in consultation with Ministry of Foreign Affairs, according to the ministry officials.

In the statement, however, it is stated that nationals from these countries, willing to visit Nepal can obtain visa beforehand from the Nepali missions abroad. Those applicants and also the nationals transiting from these countries bound to arrive Nepal are required to submit a recently issued health certificate stating that they are not infected by COVID-19 along with their visa applications. The aforementioned health certificate will be scrutinized both at the immigration at the airport in Kathmandu and the land border entry-exit points of Nepal.

The government also strongly recommended the nationals from the aforementioned eight nationalities use the Tribhuvan International Airport, Kathmandu.

Rest of the land POE (Point of Entry and Exit) in Nepal are also temporarily suspended till the date of further notice.

The government also urged the Airlines operators and travel/tour operators bound to Nepal are strongly directed to manage the travelling route accordingly.

The Nationals of those eight countries who already got the prior visa from the missions and embassies of Nepal abroad are also required to produce health certificate that proves COVID-19 Negative along with the travel documents.

The Health certificate must be recently produced a maximum seven days earlier before the time of arrival in Nepal.

The Nepali Missions abroad are also directed to deal the visa matters accordingly.

The department also informed that a specific directive and circular for the missions will be shortly circulated through the Ministry of Foreign Affairs in this regard.

KATHMANDU, March 15: Nepal Oil Corporation (NOC) has said that there would not be a shortage of LP gas as... Read More...