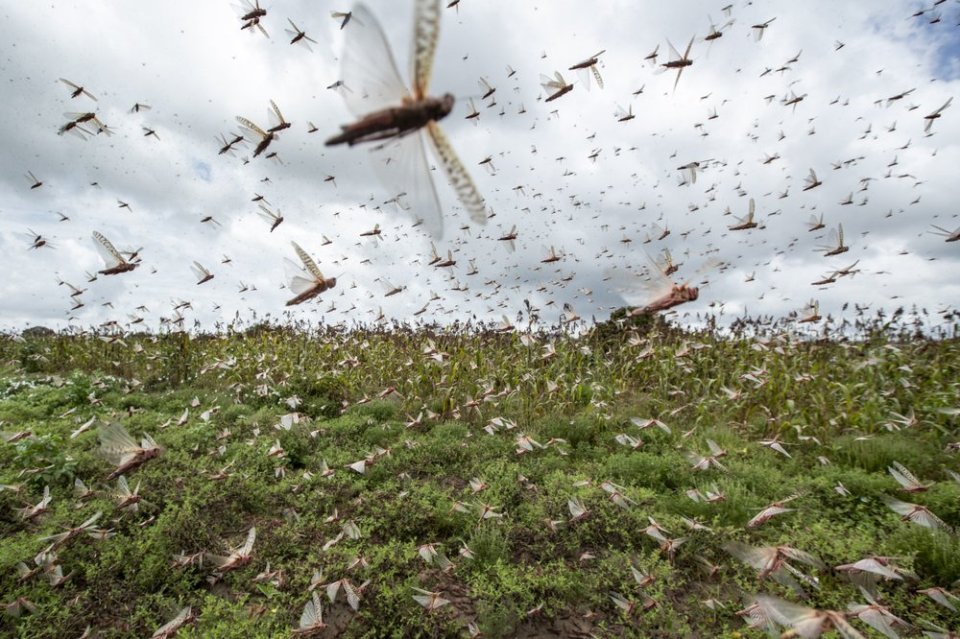 Swarms of desert locusts fly up into the air from crops in Katitika village, Kitui county, Kenya Friday, Jan. 24, 2020. Desert locusts have swarmed into Kenya by the hundreds of millions from Somalia and Ethiopia, countries that haven't seen such numbers in a quarter-century, destroying farmland and threatening an already vulnerable region. (AP Photo/Ben Curtis)

NASUULU CONSERVANCY, KENYA, Feb 2:  As locusts by the billions — yes, billions — descend on parts of Kenya in the worst outbreak in 70 years, small planes are flying low over affected areas to spray pesticides in what experts call the only effective control.

The ground crews are in “the most woeful terrains,” Marcus Dunn, a pilot and the director at Farmland Aviation, said Saturday. “If there is no network, then the fellow on a boda boda (motorcycle), he has to rush off now and go and get a network.”

Just five planes are currently spraying as Kenyan and other authorities try to stop the locusts from spreading to neighboring Uganda and South Sudan. The United Nations has said $76 million is needed immediately to widen such efforts across East Africa.

A fast response is crucial. Experts warn that if left unchecked, the number of locusts could grow by 500 times by June, when drier weather will help bring the outbreak under control.

The finger-length locusts swept into Kenya from Somalia and Ethiopia after unusually heavy rains in recent months, decimating crops in some areas and threatening millions of vulnerable people with a hunger crisis.

In swarms the size of major cities, the locusts also have affected parts of Sudan, Djibouti and Eritrea, whose agriculture ministry says both the military and general public have been deployed to combat them.

Kenya’s agriculture minister has acknowledged that authorities weren’t prepared for the scope of the infestation this year. That’s not surprising, considering it’s been decades since the country’s last comparable outbreak, U.N. officials say.

The locusts also are heading toward the breadbasket of Ethiopia, Africa’s second-most populous country, in that nation’s worst outbreak in 25 years. On Thursday, startled residents of Ethiopia’s capital, Addis Ababa, started reported sightings of the insects.

“I was surprised to find the locusts inside my living room,” said one resident, Mathewos Girma, showing a photo on his mobile phone. “It appears it is knocking on each and every one of our doors.”

Zebdewos Selato, an agriculture ministry official, told The Associated Press the relatively few locusts reaching Ethiopia’s capital are “leftovers” from the “massive invasion” in the eastern and southern parts of the country. Spraying is being conducted around the city to stop the outbreak from spreading elsewhere, he said.

Until the drier weather in June, more rain across the region will bring fresh vegetation to fuel further waves of locust breeding. One field in Kenya on Saturday appeared to be full of mating bright yellow locusts.

“They are trying to mate and reproduce, so we need more help and because we are racing against time,” said Salat Tutana, the chief agriculture officer in Isiolo county.

“So far we have decimated around five swarms in Samburu and Isiolo (counties) but we keep on receiving more swarms every week, and that is a lot in terms of the ecosystem,” he said. “They are destroying the environment.”

Within hours, the locusts can strip a pasture of much of its vegetation.

“That’s a very sad situation, especially for the pastoralists” whose livelihoods rely on their cattle, Tutana said.

Just hours after the spraying, the normally bouncing locusts were dozy, slow and dying. They lay scattered on the ground, crunching underfoot.

The five planes currently operating are capable of looking over this part of Kenya, Dunn said, but if there’s an increase in locusts in other parts of the country “we are going to need some more assistance, because we just don’t know how big this problem is going to be.”

Hamro Pahilo Paila: An exhibition to understand the new generation of artists
14 hours ago

Number of people joining the Maoist Center has increased: Dahal
11 hours ago
Eighth Tanahun festival to begin from January 22
13 hours ago