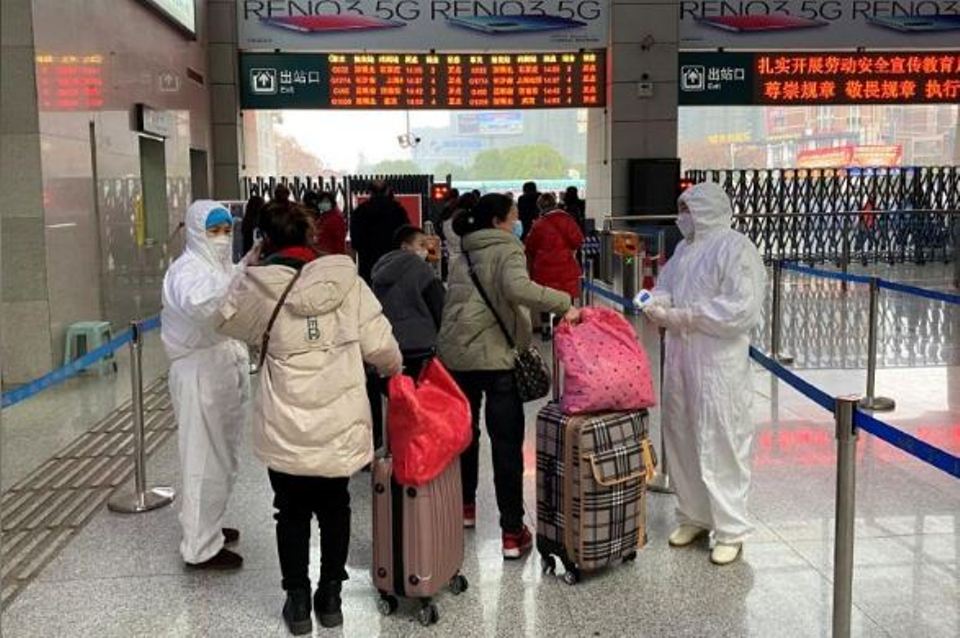 Workers in protective suits check the temperature of passengers arriving at the Xianning North Station on the eve of the Chinese Lunar New Year celebrations, in Xianning, a city bordering Wuhan to the north in Hubei province, China January 24, 2020. REUTERS/David Stanway

WUHAN, China, Jan 24: China stepped up measures to contain a virus which has killed 25 people and infected more than 800, with public transport suspensions in 10 cities, temples shutting, and the rapid construction of a new hospital to treat those infected.

The World Health Organisation (WHO) on Thursday declared the new coronavirus an emergency for China but stopped short of declaring the epidemic of international concern.

Health authorities fear the infection rate could accelerate over the Lunar New Year, when hundreds of millions of Chinese travel at home and abroad during week-long holidays, which began on Friday.

At the railway station in Wuhan, the few passengers foolhardy enough to return home to a city at the epicenter of the outbreak put on a brave face as they alighted the train.

“What choice do I have? It’s Chinese New Year. We have to see our family,” said a man named Hu, as he stepped off the train in Wuhan.

As of Thursday, there were 830 confirmed cases and 25 people had died, the National Health Commission. Most cases are in the central Chinese city of Wuhan, where the virus is believed to have originated in a market which traded in illegal wildlife.

Preliminary research suggested that in the most recent stage of its evolution, the Wuhan virus was passed on to humans from snakes.

Wuhan, a city of 11 million people, and neighboring Huanggang, a city of about 7 million people, were in virtual lockdown. Rail stations were largely shut, with few trains stopping in the city, flights were suspended and there were checkpoints on main roads in and out of the city.

On a high-speed train that stopped in Wuhan station on Friday afternoon, about 10 passengers got off, but nobody boarded before the train resumed its journey.

“I’m not afraid. I trust the government. I need to be with my family,” said a passenger, dragging two large cases to the escalator at Wuhan station. He would not give his name.

Wuhan was building a new 1,000-bed hospital to treat those infected, with the aim of having it ready by Monday, the official Changjiang Daily reported on Friday.

The prefabricated buildings were being erected around a holiday complex originally intended for local workers, set in gardens by a lake on the outskirts of the city.

Non-fatal cases have also been detected in Thailand, Vietnam, Singapore, Japan, South Korea, Taiwan and the United States, prompting several airlines to suspend flights to and from Wuhan.

But WHO said on Thursday that it was a “bit too early” to consider the outbreak a “Public Health Emergency of International Concern”. Such a designation would have required countries to step up the international response.

“Make no mistake, though, this is an emergency in China,” said WHO chief Tedros Adhanom Ghebreyesus.

“It has not yet become a global health emergency. It may yet become one,” he said.

The previously unknown virus, which has no cure and can spread through respiratory transmission, has created alarm because there are a number of unknowns. It is too early to know just how dangerous it is and how easily it spreads.

Three research teams are to start work on developing potential vaccines, the Coalition for Epidemic Preparedness Innovations said. The plan is to have at least one potential vaccine in clinical trials by June.

“I’m not scared. It isn’t as serious as everyone is making out. I’ve come back from the United States and I don’t think it is that bad,” said a rail passenger told Reuters as he alighted a train at Macheng, the station just before Wuhan.

A total of 10 cities in China’s central Hubei province have suspended some public transportation over the coronavirus outbreak, the Hubei Daily reported on Friday.

In Zhijiang city, all public venues have been shut down except hospitals, supermarkets, farmers’ market, gas stations and drug stores, said Hubei Daily.

Indoor entertainment venues in Enshi city have also been shut down, it said.

Some famous temples in China have closed due to virus. Beijing’s Lama Temple, where people traditionally go to make offerings for the new year, will close from Friday.

Haikou, capital of the southern resort island province of Hainan, is closing cultural and tourist facilities such as libraries and museums.

In Wuhan residents thronged hospitals for medical checks and rushed to buy supplies, clearing out supermarket shelves and queuing for petrol.

Chinese-ruled Hong Kong, which has two confirmed cases, is turning two holiday camps into quarantine stations as a precaution. Taiwan has banned anyone from Wuhan from entering.

The U.S. State Department warned travelers to exercise increased caution in China as airports worldwide stepped up the screening of passengers arriving from the country.

China building 1,000-bed hospital over the weekend to treat coronavirus

BEIJING, Jan 24: The Chinese city of Wuhan is rapidly building a new 1,000-bed hospital to treat victims of a... Read More...

BEIJING, Jan 23: China is putting on lockdown a city of 11 million people considered the epicenter of a new... Read More...

Science Says: What to know about the viral outbreak in China

Jan 22: Health authorities are closely watching an outbreak of respiratory illness caused by a new virus that originated in... Read More...