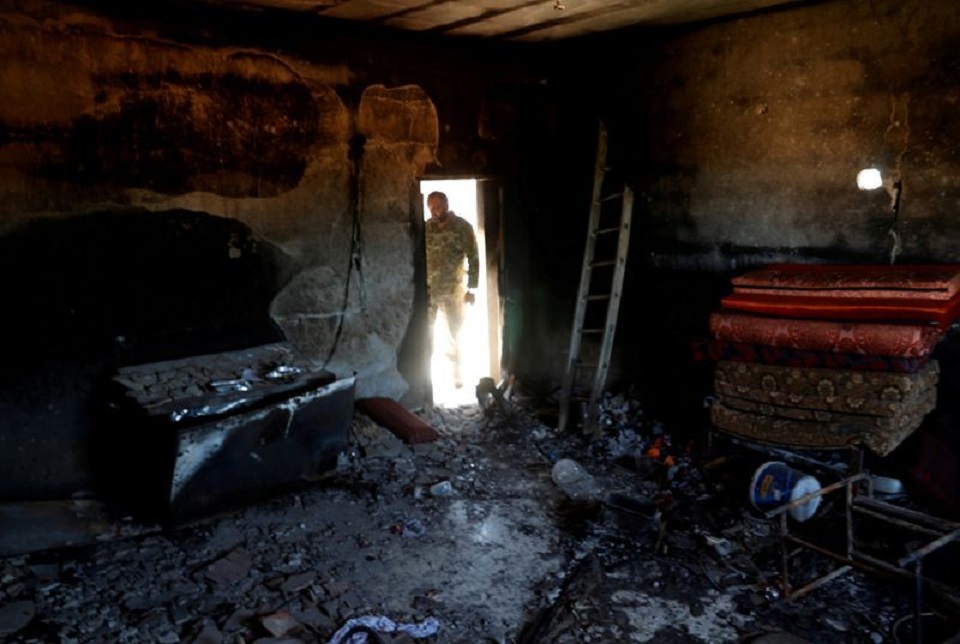 FILE PHOTO: A fighter loyal to Libya's U.N.-backed government (GNA) looks at a room burned during clashes with troops loyal to Khalifa Haftar in Wadi Rabiya neighbourhood at outskirts of Tripoli, Libya May 28, 2019. REUTERS/Goran Tomasevic

TRIPOLI, Jan 5: At least 30 people were killed and 33 others wounded in an attack on a military academy in the Libyan capital late on Saturday, the health ministry of the Tripoli-based government said in a statement on Sunday.

Tripoli, controlled by the internationally recognised Government of National Accord (GNA), is facing an offensive by military commander Khalifa Haftar’s Libyan National Army (LNA) that began in April.

There has been an increase in air strikes and shelling around Tripoli in recent weeks, with fears that fighting could escalate further after Turkey’s parliament voted to allow a troop deployment in support of the GNA.

Forces allied with the GNA described Saturday’s attack on the military camp at Al-Hadhba as “an aerial bombing” launched by their eastern rivals. An LNA spokesman denied involvement.

Earlier, the ambulance service appealed for a temporary ceasefire to allow its crews to retrieve the bodies of five civilians killed on As Sidra Road in southern Tripoli and to evacuate families.

Emergency teams withdrew after coming under fire while trying to access the area on Saturday, it said.

The GNA Foreign Ministry called for referring Haftar and his aides to the International Criminal Court on charges of committing “crimes against humanity”, adding that it will call for an emergency UN Security Council meeting to discuss the alleged crimes.

Qatar, which supports GNA, said on Saturday that the attack “may amount to a war crime and crimes against humanity”.

Ankara, which last week passed a bill approving a troop deployment in Libya to support Tripoli, also condemned the attack and said the international community needs to take steps to achieve a ceasefire.

“It is crucial for the international community to urgently take necessary steps to halt external support for the pro-Haftar army and its attacks and establish a ceasefire in Libya,” the Turkish foreign ministry said in a statement.

The United Nations Support Mission in Libya (UNSMIL) condemned the attack saying that “rising escalation... further complicates the situation in Libya and threatens the chances of returning to the political process”.

In response to the attack, GNA allied forces have targeted the LNA air base of Al-Wattia in an air strike, around 159 km southwest of Tripoli, a spokesman said in a statement.

An increase in air strikes and shelling in and around Tripoli has caused the deaths of at least 11 civilians since early December and shut down health facilities and schools, the U.N. mission in Libya said on Friday.

Rockets and shelling also shut down Tripoli’s only functioning airport on Friday.

On Friday, U.N. Secretary General Antonio Guterres renewed his call for an immediate ceasefire in Libya.

He warned that the delivery of foreign support to warring parties would “only deepen the ongoing conflict and further complicate efforts to reach a peaceful and comprehensive political solution”.

The parliament which moved to the east in 2014 voted to provide Haftar with emergency funding on Saturday.

The pro-Haftar chamber also held a series of symbolic votes against the GNA and Turkey, which struck two pacts on maritime boundaries and military cooperation in November.