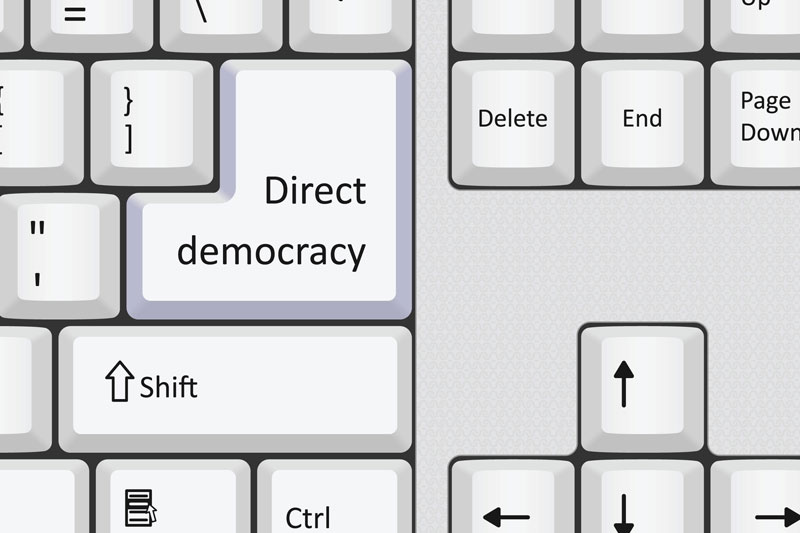 I believe Nepal can learn a thing or two from Finland and start adopting direct democracy.

After having watched the YouTube video of the First Minister of Scotland Nicola Sturgeon addressing the Scottish National Party in Glasgow, I have come to regard her as one of the smartest and boldest politicians holding office. She voiced her dissatisfaction over the outcome of the Brexit referendum, warning the UK Prime-minister Theresa May that anything less than Scotland remaining part of the EU would trigger a second Scottish independence referendum by 2020. Looking at how unexpected political events are unfolding around the world, it feels as though this is an age when contempt for representative democracy has spilled over into a new kind of politics.

The word “democracy” was derived from the Greek word “demos”, which means “people” and “kratos”, which means “power”. They say representative democracy, one of the most popular forms of government, is a relic from the era when horse-drawn carts were the most popular mode of transport. Now, in the age of self-driving vehicles, representative democracy seems outdated, mainly because there are many internet-based tools at our disposal that let citizens speak for themselves.

Democracy is not a magic wand. Many countries have not been able to harness the benefits of democracy. One reason for this unwanted outcome could be that money came into the picture creating a corrupt political class immune to accountability and interested mostly in enriching themselves. This destructive trend has left countries embracing democracies even worse off.

A long time back, democracy allowed leaders and the interested members of the society to regularly attend town hall meetings to decide the future of their municipality when the city-states were the islands of governance. However, as the city-states evolved to become nation-states, managing the national affairs became extremely difficult, forcing humanity to come up with an ingenious solution that we have come to call representative democracy.

The election officials then make decisions on behalf of the voters. What is wrong with this model is that the elected officials often assume that once voting has taken place and a government is formed, that is the end of democracy until the next general election. Another deeply flawed aspect of representative democracy is referendum.

Referendums have attracted criticism from a growing number of progressives around the world. Many feel voters are forced to base their decisions with relatively little information, making them rely on political messaging. Furthermore, voters with relatively low levels of satisfaction can often behave recklessly at the polls, potentially throwing the country off-track. For example, Colombian citizens threw their country into an uncertain future after rejecting a peace deal designed to end 52 years of war with FARC guerrillas. With a voter turnout of 38 percent, those in favor of the peace deal received 49.8 percent votes, while those who opposed received 50.2 percent. As you can see, only 19 percent of the eligible voters seemingly decided the fate of Columbia.

The UK has a similar story. During the Brexit referendum, 51.89 percent voted to leave the European Union (EU), while 48.11 voted to remain. The Brexit referendum had 72.2 percent voter turnout where Northern Ireland and Scotland voted to remain in the EU. Therefore Scottish citizens now feel it is democratically unacceptable for the UK to force Scotland to break away from the EU, even though the vast majority of Scots voted to stay with the EU. In both the referendums almost half the voters are unhappy with the outcome.

Democracy’s very foundation has shifted over the years. However, democracy is still the most advanced political system we have seen so far. So if modern-day nation-states are to prosper, democracy has to be fine-tuned to align with the evolving norms of society. Change is hard, but this elasticity, I believe, is the marvel of democracy.

The ancient Greeks practiced a form of democracy known as “direct democracy”. Citizens of the city-state were allowed to speak in the legislative assembly, and also to vote on laws. In fact, direct democracy permits every citizen to play an active role in the government by allowing citizens to prioritize what is important to them, rather than relying on representatives making the decision. For example, the citizens in one area might place a higher priority on funding for schools and libraries, and the citizens of another area might place greater importance on building better roads, reducing pollution, and managing traffic congestion.

Despite the promise, many feel direct democracy will only work if it is practiced in a localized region with a relatively small population because there is chance that large numbers of eligible citizens might clog the workings of the government, sparking endless debates and votes without actually achieving anything.  I too agree with the claim, but only to a certain extent, because with the internet and other digital technologies, it is now possible to effectively manage public participation in governance, provided highly intelligent software is put to work and the internet is ubiquitous.

In fact, the internet has potential to really boost the democratic legitimacy by allowing greater citizen input into the political decision-making. Finland, once a traditional democracy, is now a fully direct democracy. The Nordic country introduced Citizens Initiative Act in 2012 as part of its constitutional reform. With the Act in place, the Finnish citizens who are eligible to vote may now put forward a proposal for legislation or for amending or repealing existing Acts. If the initiative is able to gather support from at least 50,000 Finnish citizens within six months, the proposal can be submitted to the Finnish parliament. It is then mandatory for the parliament to discuss each and every petition that meets the threshold of 50,000 signatures. The lawmakers still have the final say over policy outcomes, but citizens now have an agenda-setting powers otherwise held only by lawmakers.

To facilitate the process for the citizens of the digital age, a volunteer group in Helsinki has created Avoin Ministeriö (Open Ministry) website, an online tool for drafting bills and proposals as well as gathering signatures. Open Ministry is the Finnish Parliament’s way of using digital technology innovatively to get citizens’ proposals straight to a parliamentary vote. Openness and inclusiveness has been the central principle of the initiative.

I believe Nepal can also learn a thing or two from Finland and start adopting direct democracy. So, instead of bickering over issues that are soon to be irrelevant in the 21st century, the government should work on formulating revolutionary laws like the Citizens Initiative Act in order to strengthen democracy so that we the citizens can also set their development agendas. More importantly, the Election Commission should come up with a revolutionary internet-voting solution so that Nepali citizens residing in Nepal and also in foreign soil can vote over the internet. Nepal needs direct democracy now more than ever.

The author has worked as a Project Management Consultant for ICT Development Project in the Economic and Infrastructure Development  Division at the Office of the Prime Minister and Council of Ministers.