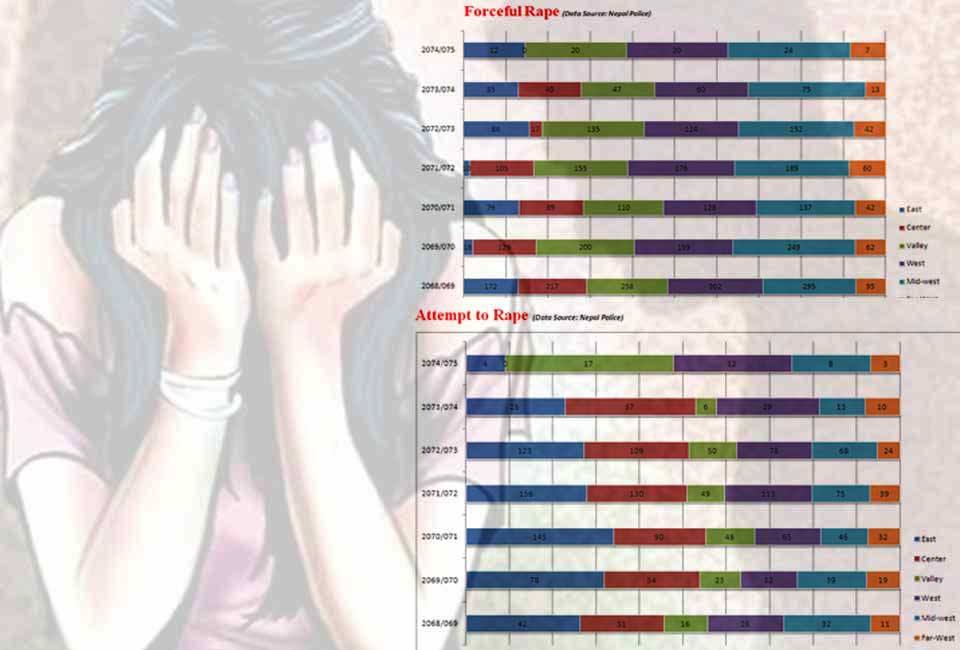 KATHMANDU, Feb 2: On January 24, an eight year girl was raped, murdered and buried by her 16 year cousin brother, Jiudhan Rai in Khotang district, eight hours drive towards the East from Kathmandu, the capital. Her body was retrieved from the bank of Chimchima River.

Two months ago, on October 26, 2017, Devi Prasad Adhikari, 52 and Chij Bahadur Gurung, 22 were arrested from Chitwan for raping a six year old girl.

Both minors are just representatives of the many rape cases that are reported and find space in media across the country.

Despite the rise, many cases go unreported, largely because speaking of sex is a taboo and victims and their families are ashamed to open up. This is especially true in central Terai regions and remote hilly areas where access to justice is limited,” Laxmi Pandey Khanal, inspector at Women Directorate of Nepal Police said.

“The data shows that while the number of cases being reported is increasing due to awareness, rape also is on the rise,” she said.

Data shows that the eastern region has highest number of rapes and its attempts registered; 1,343 and 589 respectively while far-west has the lowest; 277 and 138 in the past seven years. In Kathmandu valley, there were 610 reported cases, (seven every month) and 155 attempts altogether in the same time frame.

While incidents of reported cases are on the rise and the court prioritizes the crime, rape victims wait between four months to a year to get justice, largely due to procedural hurdles/

While incidents of reported cases are on the rise and the court prioritizes the crime, rape victims wait between four months to a year to get justice, largely due to procedural hurdles. As the investigation and procedural delays are likely to be emotionally and mentally draining, the government provides counseling, protection and other support required for free.

“Rapes happen in private spaces where there is minimal witness. Hence, once the victim reports of rape, the police start their investigations where handful of things are taken into consideration; victim’s statement, symptoms and medical tests,” Ananta Raj Luitel, advocate at the Supreme Court said.

Following the investigation and its findings, police submits its report to a government lawyer who then registers the case in the court.

The court gives a benefit of doubt and initiates its own reexaminations by looking into confessions, medical tests, DNA tests, and circumstantial evidence to revalidate police findings.

After a case is registered, and provided that the offender is quickly taken into custody, a general hearing is scheduled. Repeated hearing (once a week) of the case will result in continuous hearing, ‘’a fast track approach’’ that the judge could resort to ensure timely justice to the victims.

“However, it is for the judge to decide a fast track approach,” Luitel said. “Complete evidence is likely to ensure quicker justice.”

5 beauty hacks that every girl should know

If you think staying beautiful takes a lot of effort, then you need to read this. All it takes to... Read More...

8 things you must do before hitting the gym every morning

We all shoot up and plunge like mercury. Sometimes, our enthusiasms know no bounds and we are all geared up... Read More...

Yamaha to send winners on Japan trip every week

Rs 100,000 each given to families of five children drowned in pond
49 minutes ago