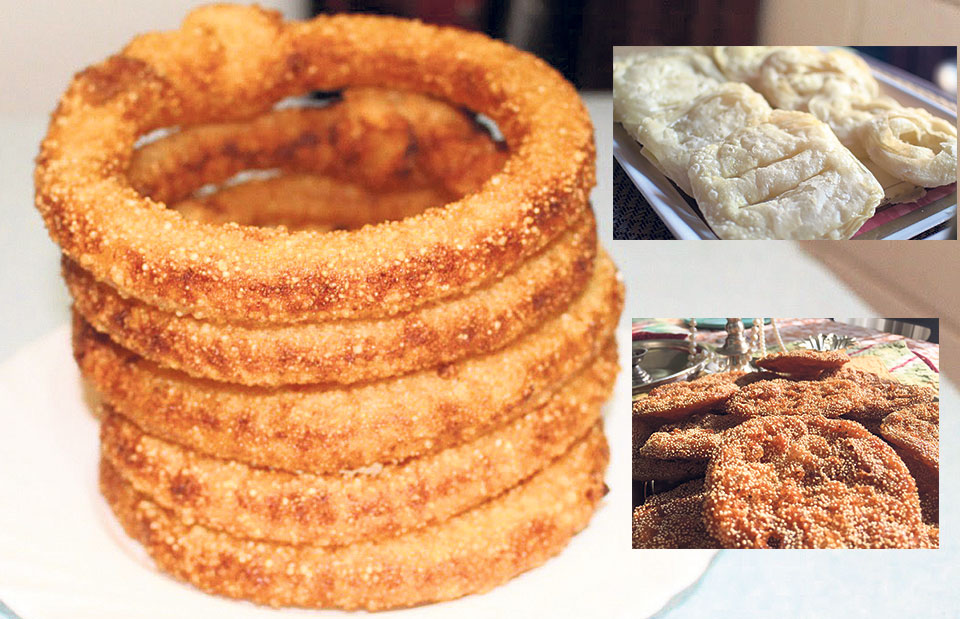 If Dashain is all about the savories (read various mutton delicacies), Tihar is the time we revel in the sweet delights. People from different cultures and regions prepare various types of ‘mithais’ or desserts to offer to the gods worshipped during this festival. So, for anyone with a sweet tooth, Tihar is as close to a sweetness heaven as it gets. Here are five such delights that we recommend you to not miss out on.

Anarsa
Anarsa is a rice-flour pastry that is prepared especially on the occasion of Tihar. Anarsas are made from soaked powdered rice and ‘shakkar’ or sugar. The rice is soaked in water for at least six hours, with the water changed daily to mitigate fermentation. The rice is then dried till it retains minimal amount of moisture and ground into a fine powder. This is then mixed with an equal amount of sugar. After the mixture is fully prepared, oil is poured into a big pan until it starts steaming. Then, the mixture is poured into the oil in circular shapes. The anarsa is then flipped over and cooked till both sides become golden brown after which it is taken out and stacked in a pile, ready to be eaten. If you are not a fan of the excess oil/ghee, place them on some paper towels to absorb the extra oiliness.

Sel roti
Sel roti is a mandatory dish to enjoy in Tihar. Sel roti is usually prepared in the morning of Laxmi Puja so that it can be served to the goddess. After the puja is done with, people can enjoy the sel roti with a hot cup of milk tea. One thing to note is that even though it looks simple, it’s actually pretty difficult to make really good sel roti. A good sel roti is neither too hard nor too soft. It’s thick, round and golden brown in color. For this, it’s very important to get the ratio of the rice-flour, sugar and ghee right. After preparing the mixture, cover it and leave at room temperature for one to two hours so that the ingredients can mix well together. After that, heat a pan and add cooking oil. Make sure that the pan has a flat base and is deep enough for the sel roti to float freely. To determine at what time should you pour in the mixture, watch out for smoke from the oil or drop a toothpick in the oil and see if it floats. If it does, pour the mixture in a continuous ring into the hot oil and cook until both sides become golden brown.

Phini roti
Phini is a sweet delight made during Tihar to often give as ‘koseli’ among family members. Phini roti is unique to the people of Newar community but nowadays many non-Newar families prepare it as well. Just like sel roti, it is offered to goddess Laxmi, goddess of wealth on Laxmi Puja. To prepare phini roti, you have to prepare ‘satho’ which helps create layers in the roti as well as the phini dough. For satho, mix rice flour and ghee in a dish until you have a nice smooth texture. For the dough, add ghee into the flour and slowly add water to it till the dough becomes soft and smooth. Flatten and roll out each dough piece with a rolling pin. Using a butter knife or spoon evenly spread a generous amount of ‘satho’ all over the flattened dough. After that, make three equally spaced slits on the rolled dough with a knife and fry it in oil.

Malpua
Malpua, also known as amalu, is a pancake served as a dessert/snack that originated from the Indian subcontinent. Just like in Nepal, malpua is very popular in India and Bangladesh as well. Among all the dishes listed here this one is probably the least time consuming and the easiest to make. To make malpua, mix wheat flour, sugar and black pepper with two cups of water till it becomes thin and smooth. Heat the pan and add oil into it. Take out the mixture with the help of a round spatula (dadu) and pour the mixture little by little into the oil. The malpua is ready to be served when both of its sides turn red/brown. If you want to make it a little different, you can add banana to the mixture, which is how the Bangladeshis make their malpua.

Kalakand
Kalakand is an Indian sweet made out of solidified, sweetened milk and paneer. It’s readily available in many sweet shops in Nepal and is a pretty popular mithai not only in Nepal and India but also in Pakistan. This Tihar, instead of just buying it from your local sweet shop, you can try making it at home as it is very easy to prepare. All you need is some paneer and sweetened condensed milk (readily available in grocery stores). The first step is to mash paneer and make a rough paste and mix it with dairy whitener and sweetened condensed milk. After that heat the mixture in a thick bottom pan and cook on medium flame with constant stirring till the mixture becomes thick and starts to separate from the sides of the pan. Remove the mixture from heat and spread it on a greased plate. You can then sprinkle some crushed pistachios or cashews on top and, after the dish cools down, cut it into square pieces and serve.

KATHMANDU, Aug 27: The traditional festival of Gaijatra or the 'cow festival' is being observed from today in the three... Read More...

MELBOURNE, Australia, Dec 31:  Sixty people were injured at an Australian music festival in the crush of a crowd trying... Read More...

KATHMANDU, Oct 10: The ninth day of the Bada Dashain festival is being observed as Mahanawami festival throughout the country... Read More...