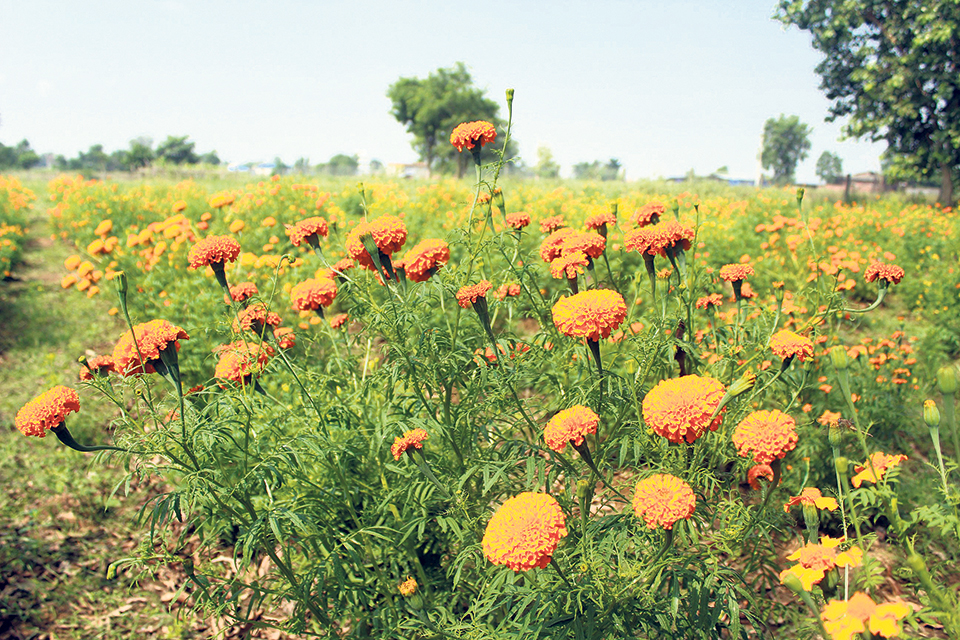 BHAIRAHAWA, Oct 20: Like other places of the country, the southern district of Rupandehi used to be dependent on India for marigold flowers during festivals and celebrations, until few years ago. But with the expansion of flower farms in the district in the recent years, flower import from India has decreased. Even for the upcoming Tihar festival, when flowers are needed in large quantities, the district seems to be self-dependent.

Flowers worth millions are imported into the country from India every year. But as commercial farming of flowers is blossoming in Nepal, the use of local product has increased in almost all parts of the country.

Targeting the Tihar festival, commercial marigold flower farming has been started in the Bindabasini temple area located at Gonahiya-9 of Bhairahawa. Sushil Poudel, shareholder of Nepal Multipurpose Cooperative, said that the organization under agricultural projects had been engaged in vegetables and fruits farming. Now marigold flowers are being commercially produced through the organization.

“Alongside other agricultural products like vegetables and fruits under the agricultural project, we have started flower farming from this year. We are planning to sell flowers worth Rs 60,000 this Tihar,” he said. “This, albeit a very small figure, will contribute towards improving our trade situation with India.”

According to Poudel, the farm employs about 8 staff on daily wages and keeps one permanent staffer. The local level government has also supported it by providing water tankers and water pumping machine under subsidy.

“We have received pre-orders for garlands. The demand is huge and taking the business of this year we are planning to expand the farm in the coming days,” he said.

Under the agricultural project of the cooperative that started three months ago, different vegetables, banana, papaya, lime and marigold flowers are being grown for commercial purpose in 3 bighas of land. Marigolds are being grown in 10 katthas of land, according to Poudel.

Not only in Gonahiya, commercial production of marigold and globe amaranth (Makhamali) is taking place in different parts of the district. These flowers are especially replacing flowers brought from Varanasi and Kolkata of India.

According to the Bhairahawa Customs Office, the import of flowers has decreased. Although the office did not maintain official statistics of flower imports earlier, it started doing so from mid-July. According to the office, Nepal imported 35,750 kilograms of different flowers worth Rs 864,773 till mid-October.

The demand of marigold and amaranth flower increases during Tihar. Flower entrepreneurs say that if the concerned bodies provided technical support and skills-development training to the farmers engaged in commercial farming, Nepal would soon become self-reliant in flowers.

Minor killed after rape in Rupandehi

BHAIRAHAWA, March 7: It has been revealed that a 12-year-old girl of Kotimai Rural Municipality in Rupandehi who was found dead... Read More...