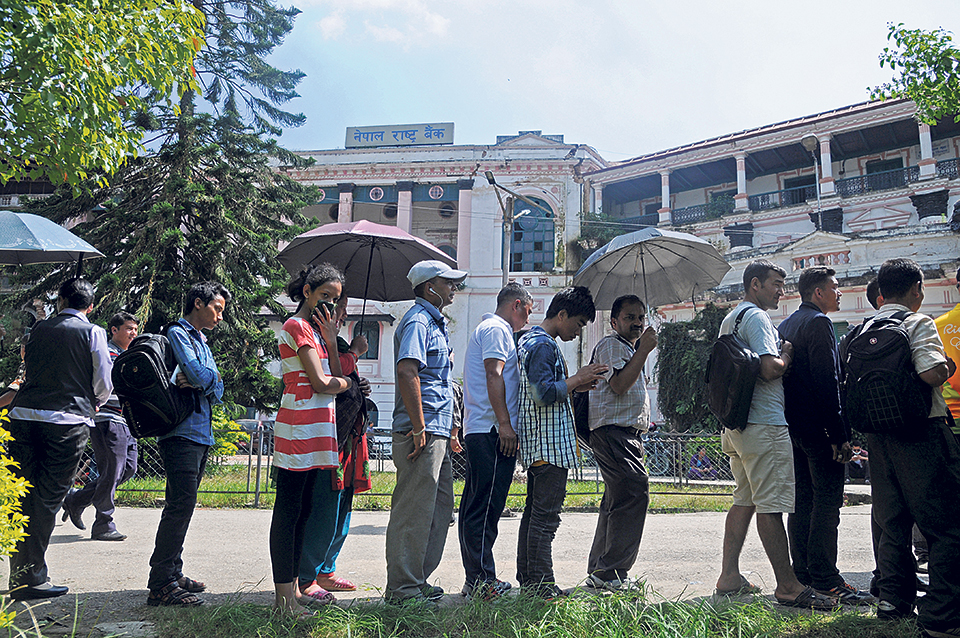 According to the NRB, the central bank will start exchange of new banknotes from its Currency Management Department Office in Baluwatar and its offices outside the Kathmandu Valley along with nearly 20 branch offices of three government-owned banks in Kathmandu.

The maximum limit that a person can exchange the new banknotes, however, is lower than the limit of Rs 27,000 in last year’s Dashain festival.

The demand for new and crisp banknotes soars as during Dashain festival as such clean bills are used for Puja and Dakshina (offering). People flock to bank branches and NRB’s counters to get crispy banknotes for the festival.

The central bank will provide exchange facility of a bundle of banknotes of Rs 5, Rs 10, Rs 20, Rs 50, and Rs 100 denominations each to a person. Each bundle contains 100 bills.

According to the NRB, the exchange facility for lower denomination fresh banknotes will be available for a week until October 4. Along with the central bank’s counters in the Currency Management Department in Baluwatar, the exchange service will be available also from the central bank’s offices in Biratnagar, Janakpur, Birgunj, Pokhara, Siddharthanagar, Nepalgunj, and Dhangadhi. In the Kathmandu Valley, 20 branch offices of Rastriya Banijya Bank Ltd, Agricultural Development Bank Ltd and Nepal Bank Ltd will also provide exchange facility.

Issuing a notice, the NRB has also informed that people can get the exchange facility for lower denomination banknotes from the branches of the bank and financial institutions where they have their accounts.

“In addition to providing exchange facility from our own counter directly, we have also supplied adequate fresh banknotes to bank and financial institutions (BFIs). There will not be any shortage of crisp banknotes during Dashain festival,” said Niroula.

Meanwhile, the central bank has also urged the public to handle the banknotes with utmost care. It has urged public not to touch banknotes with wet and colorful or dirty hands which could damage the paper bills.

“People should be mindful that the banknotes are the assets of the country. There is cost of printing, handling, sorting and managing the bills. We all have the duty to protect them,” said Niroula, warning that defacing, disfiguring, mutilating or destroying banknotes is a punishable offence.