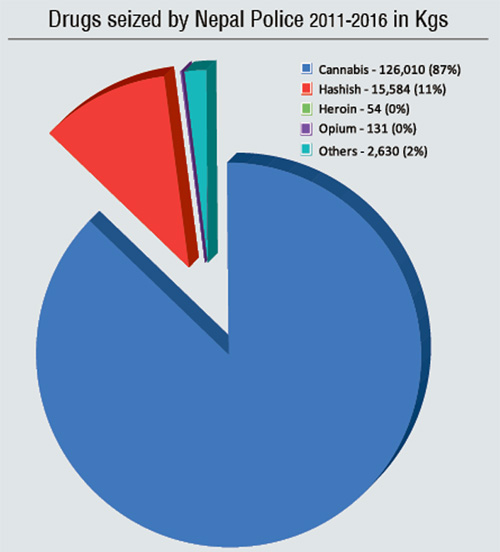 KATHMANDU, Feb 11: Drug addiction among students has been emerging as a challenge for the country. Admission trends at rehab centers indicate that 75 percent of drugs users are between 15 to 30 years of age.

"Among the drug users, students from grade 11 to bachelor's degree level constitute the highest number," said SP Birendra Shrestha of the Narcotics Control Bureau of Nepal Police. "Many students use cannabis, some use hashish and a few use brown sugar. The number of girls using drugs is also increasing annually. At present, 6-7 percent of users are girls," he added.

SP Shrestha said they caught a dozen and a half high schoolers including six girls intoxicated with drugs and alcohol, at around 9 AM at a pool-house in Patan  recently. "We handed them over to the parents," he added.

Consumption of narcotic drugs and an over dose of alcohol are taken as drug abuse.

About 35 percent of prison inmates in the country are given to drug abuse also, said SP Shrestha. "We take action against the sellers of the substances but not the users as addiction is a disease and users are sick people," he said.

Most  rehab centers in Kathmandu Valley are filled with treatment seekers. There are 13 rehab centers including two for just girls, in Budhanilkantha Municipality. Among 112 rehab seekers at two of the centers, 26 were girls, said Khadga Shrestha, an officer at the Narcotics Drug Control Division under the Ministry of Home Affairs (MoHA). "Drug addiction is a danger to society. The trend of drug use by the younger generation is increasing every year."

The users start with cigarettes and other tobacco products  and go on to marijuana/cannabis, hashish, brown sugar, cocaine and cocktails of medical drugs, officials investigating abuse cases said.

There are about 300 rehab centers across the country including some for girls only, but several are running illegally. Only 104 rehab centers are registered with the Narcotic Drugs Control Division, according to MoHA.  Many of the rehab centers can accomodate 35-50 treatment seekers but most  are pressed to admit more than capacity.

Aasara Drug Rehabilitation Center, which is operated by Nepal Police, can accomodate 85 persons seeking residential treatment. They are enrolled for four months. However, the parents of the drug users have pressed the center into enrolling 90, it is stated. The center does not enroll anyone below 16 years of age or girls.

"Parents frequently come to us and request us to enroll their wards even  if they are below 16.  Some 75 percent of those enrolled are aged 18 to 30," said Inspector Chandra Giri. "During counselling, the users admit that they started using drugs since grades 5 and 6," he said.

Even doctors,  engineers, pilots and teachers come to Aasara Rehab Center. "An engineer was recently discharged from the center. A medical doctor and a pilot were enrolled a few months ago. They were addicted to alcohol," said Inspector Giri. "The center had a 54.88 percent success rate in the treatment during last fiscal year," he added.

The increasing number of drug users shows that part of the younger generation is heading towards the abyss. "We estimate that about 0.2 percent of school children use drugs," said Lakshya Bahadur KC, president of the Private and Boarding Schools' Organization Nepal (PABSON).

Experts said that easy access to drugs has encouraged the rampant use of drugs by youths and their eventual addiction. Drug stores, some of them operating illegally, restaurants and groceries sell drugs, cigarettes and alcohol even to school children. "These establishments  must be strictly monitored and subjected to legal action," said Giri.

SP Shrestha said that the authority to check the legality of drug stores lies with the Department of Drug Administration. "We are ready to punish them if the government cooperates," he added.

Number of narcotic drug users up in Mahottari ... Read More...