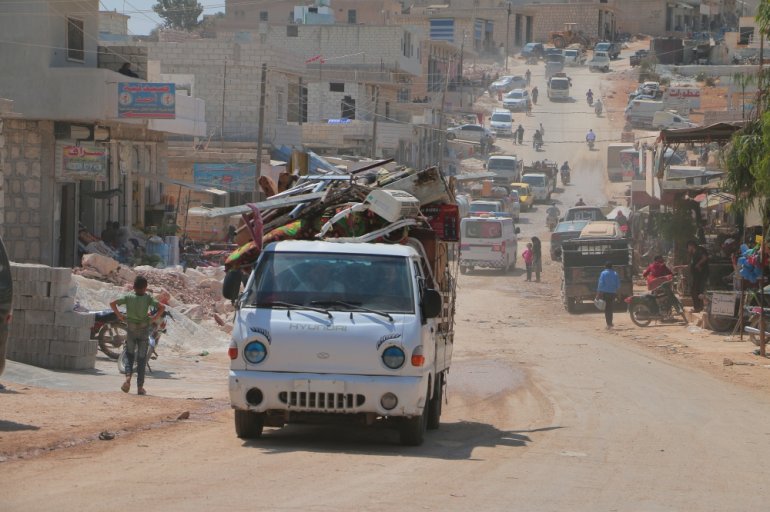 AMMAN, Aug 21: Ten of thousands of people have fled to Syria’s border with Turkey in the last few days as a Syrian army advance pushed further into the opposition’s last major stronghold, residents, rights groups and opposition sources said on Wednesday.

They left Maarat al-Numan, a city in Idlib province that has been a sanctuary for families fleeing former rebel areas, as a Russian-led push has come close to capturing the strategic town of Khan Sheikhoun further south.

“The flow of cars and vehicles leaving is not stopping,” said Abdullah Younis from the city. Rescuers there said around 60,000 people had fled in the last four days alone.

On Tuesday, Russian and Syrian jets intensified their bombing of scattered villages and towns around Maarat al-Numan, with the al-Rahma hospital in the area struck, residents said.

“There were 15 raids on Jarjanaz in less than five minutes,” Abdul Rahman al Halabi told Reuters from the area.

Rebels concede most of their fighters have fled Khan Sheikhoun but are providing fierce resistance to the Syrian army, which has secured a foothold in the rebel-held town that was bombed with sarin gas in 2017.

State media on Tuesday said government forces were battling militants but had extended their advance and seized a highway running through the town.

Taking Khan Sheikhoun would be an important gain for Moscow and its ally into the northwestern region, where Moscow has helped President Bashar al Assad turn the tide in the eight-year-old conflict since stepping up its intervention in 2015.

Russia has backed the campaign, making thousands of raids on rebel-held northern Hama and southern Idlib in what Western experts say is a “scorched earth strategy”.

Foreign Minister Sergei Lavrov acknowledged on Tuesday that Russia had military personnel on the ground in Idlib province, the Interfax news agency quoted him as saying.

Russia has previously downplayed its direct role in the advance, where it used mercenaries as well as directing battles, according to Western intelligence sources.

The fall of Khan Sheikhoun ends rebel control over northern Hama province, where a rebel group, Jaish al-Izza, had been defending the three major towns of Latamneh, Kfr Zita and Morek.

The latest advance has been aided by thousands of new reinforcements including Iranian-backed militias.

A suspected Syrian army strike on Monday hit near a Turkish military convoy heading to an observation post near Khan Sheikhoun. Damascus denounced what it said was a Turkish attempt to save routed rebels.

A senior Turkish security official told Reuters talks were going on with Russia over the fate of the convoy, which was en route to an outpost near the frontline. The convoy had not moved since the strike, but there was no possibility the post “would be abandoned.”

Rebels said a Turkish patrol on Wednesday moved from one of a dozen military posts established in the area under agreements reached with Russia in what they said was a message by Ankara that it won’t succumb to Syrian government pressure to pull out.

The Turkish presence in the northwest and extensive covert military aid it has extended to some Ankara-backed rebel factions had complicated the campaign to seize the last rebel bastion, Syrian military experts and rebels say.

After months of stalemate, Russia has increased the intensity of raids in the last 10 days, transforming the situation on the ground. Hundreds of civilians have been killed and at least 400,000 people displaced, medics, NGOs and the United Nations say.

The Syrian Network for Human Rights said 196 children were among the 843 civilians killed in the Russian and Syrian raids since the campaign began last April.

Moscow and Damascus, who deny indiscriminate bombing of civilians areas or targeting hospitals, say they are fighting jihadist militants drawn from across the world.

Revenue mobilization off the mark: Finance Minister Poudel
5 hours ago