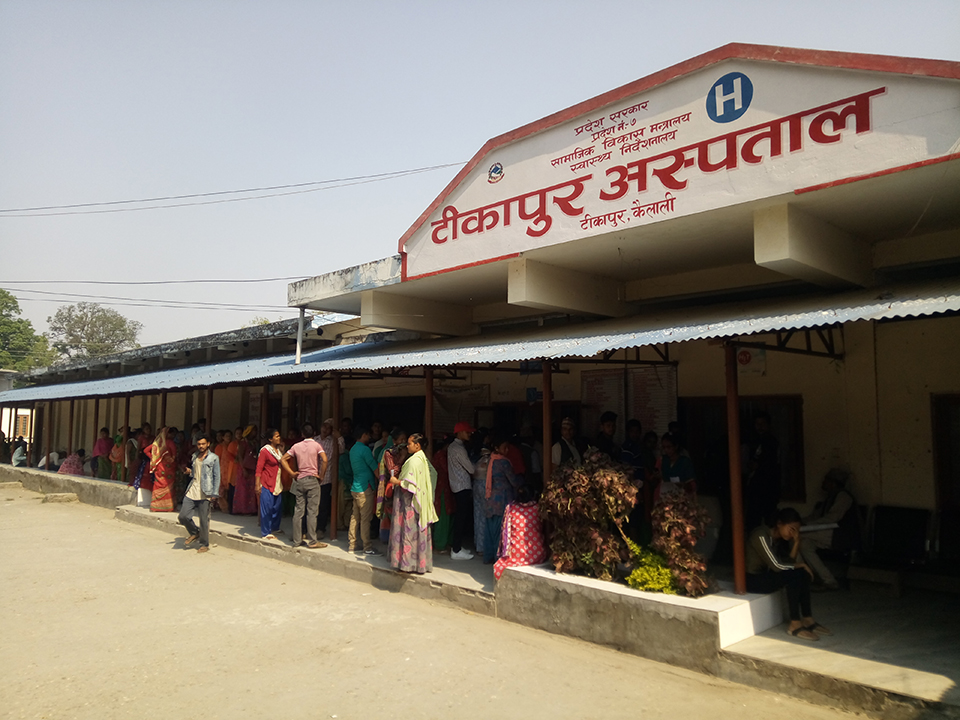 TIKAPUR, Aug 12: There has been an immediate, hard impact of the Civil Servants Adjustment Act on the health sector. Hundreds of thousands of patients across the country have been affected as health workers and doctors have started leaving hospitals for their new postings following the adjustment process of civil servants and government officials in the federal structure. The chaos and vacuum in hospitals which is likely to stay for sometime (until the adjustment process comes to an end) is sure to deprive millions of people of their health rights unless the government considers some options to address the problem.

The situation in Tikapur Hospital is an example of the sudden impact of the implementation of the Act. Most of the doctors here have chosen their adjustment elsewhere. Some of them have already left for their new destinations while others are readying to move. In a few days, the hospital is likely to be without doctors and health workers. And since not as many have chosen to come to this far-western region, the hospital is likely to suffer even after the adjustment process gets over unless the government fills the vacuum with plan B.

Medical Officer Dr Amit Prajapati and Dentist Dr Purna Prasad Sharma of Tikapur Hospital have already gone to the hospitals of their choice. Prajapati had chosen Province 3 while Sharma preferred Karnali Province to others.

Medical Superintendent Dr Narendra Khanal has been transferred to the Department of Health Services in Kathmandu. He is waiting for the formal letter to arrive so that he, too, can move on. "I have to leave as soon as the letter arrives. It's the government's order, I cannot disobey it," he said. He has been working at Tikapur Hospital for the last nine years.

An orthopedic doctor here, Laxman Sigdel's contract has expired. The contract needed to be extended from the new fiscal year but there is no sign of that happening anytime soon. The confusion over the jurisdiction of the provincial and federal governments has left such kinds of cases unresolved. If his contract is not extended soon, he might go elsewhere.

Another medical officer Dr Nawaraj Sharma might not be seen in Tikapur hospital any longer. His contract is ending soon.

It seems the hospital is going to be left with only two doctors - physician Dr Sanjay Bhushal and pediatrician Dr Amarnath Thakur.

Not just doctors, other health workers are leaving the hospital too for their new postings. ANMs Tara Kharel and Geharaj Khanal have been been posted to Bhajani and Arghakhachi, respectively. After the duo quit, the hospital will no more be able to carry out surgery on pregnant women.

The crisis is deepening each day as not even a single doctor or health worker has come to replace the outgoing workforce.

"It is like a flood. It has flooded off all the staffers and doctors, "said Medical Superintendent Dr Khanal. "Later, everything might get adjusted, but for now, the mess is here to stay. And this is happening elsewhere too. So the beginning is very challenging."