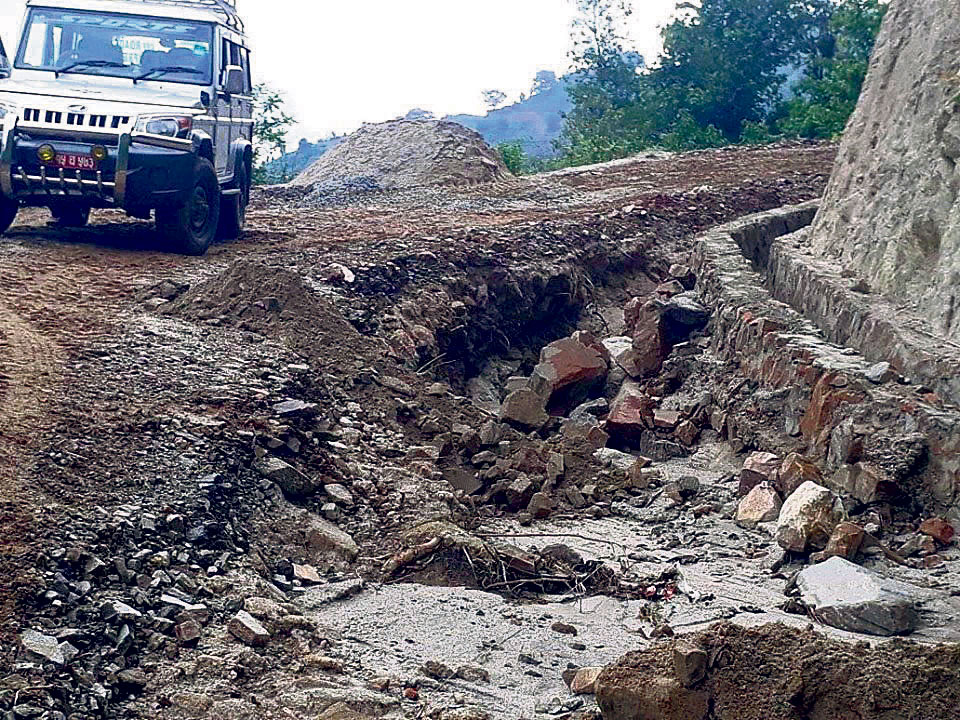 A jeep negotiates its way through a dilapidated road in Dhading in this undated photo. Photo: Sarita Shrestha/Republica

DHADING, July 22: Nilkantha Municipality of Dhading had allocated Rs 140.2 million for construction of roads and bridges during the last fiscal year. Among the priority projects of the local unit, a few have been completed while the fate of some others hangs in the balance.

The municipality invested budget for the construction of a ring-road and a wide network of roads to connect every wards. Those roads are now in dilapidated condition. With the onset of the monsoon, the roads have turned muddy and slippery almost everywhere. Big potholes and uneven surface have made the paths prone to accidents. For commuters, it is an ordeal to travel the roads. Vehicles find it the same.

This fiscal year too, the municipality has allocated the biggest pie of its budget for roads. A total of Rs 100.80 million has been allocated for road projects alone.

During a recently held public meeting, mayor of the municipality Bhim Prasad Dhungana stated that roads are their main focus for infrastructural development.

“It is the foundation of all other developments and we have given it a very high priority,” he announced in a loud voice while addressing a mass gathered on the premises of the municipality to get informed of the policy and programs for the new fiscal year.

“It is not possible to undertake any other projects without roads. So, our municipality’s first priority is road,” he added.

According to Mayor Dungana, once the municipality ensures a good transportation system, the economy of the place will boom dramatically. “Our local productions will get market. Our youths will stop going to Gulf countries for job as they will have enough opportunities here itself,” he maintained.

Dhunebeshi Municipality has allocated even bigger size of the budget for roads. It is going to spend Rs 150 million for road projects this fiscal year.

Not just these two municipalities, but all other 11 rural municipalities in the districts have taken the same approach. Interestingly, roads remain the top demand of the locals as well. During public meetings, they pressure local representatives ‘to bring the road to their houses’. According to Mayor Dhungana, ‘people have also understood that road means development.’

In the last few years, the villages and towns of the country have witnessed mushrooming of roads. And what is apparent is the pitiable conditions of the roads. Let alone the old ones, even the new roads look in a sorry state.

Reports of roads accidents often point the finger to poor quality of roads. However, the authorities and people do not seem to have learned lessons from them. As the local bodies continue to allocate a huge budget for roads but have not brought the quality issues in discussion, it indicates that more roads will be constructed compromising the quality of the roads.

When asked to comment on this, Mayor Dhungana admitted that the local bodies have indeed been insensitive toward the quality of roads and safety issues. “But we will take care of this,” he said.

Binda Ghale, a local of Siddhalek Rural Municipality – 5 believes that there is no better option than opening roads in the rural areas. The villages which were isolated until some time ago are now connected with the rest of the country, thanks to the roads, she said in appreciation to the works of the local bodies. She, however, stressed that roads should be scientific.

“It is very true that poor roads are killing a lot of people. We hear the news of road accidents, basically in the hilly areas, every now and then,” she said. “Roads are important but those should be constructed properly.”

Haphazard digging of the earth surface in the name of roads have left several nearby human settlements fragile. Landslides and floods have been far more frequent and less predictable. Environmentalists have long warned against messing with nature.

Meanwhile, Hemraj Ghimire, chief of the Traffic Police Office, Gajuri, stated that roads have been opened at such areas which do not simply look practical for roads.

“Just the sight of the roads sends shivers down your spine. They look so dangerous. No wonder, accidents are not uncommon when roads are opened so haphazardly,” he said.

He added that the topography calls for very competent builder companies for the roads. But in the villages, it is the local consumer committees which are involved in road projects.

KATHMANDU, Dec. 21: Minister for Physical Infrastructure and Transport Raghubir Mahaseth has said that construction works of bridges would be... Read More...