Rs 71.17 million doled out to politicians from state coffers as medical expense 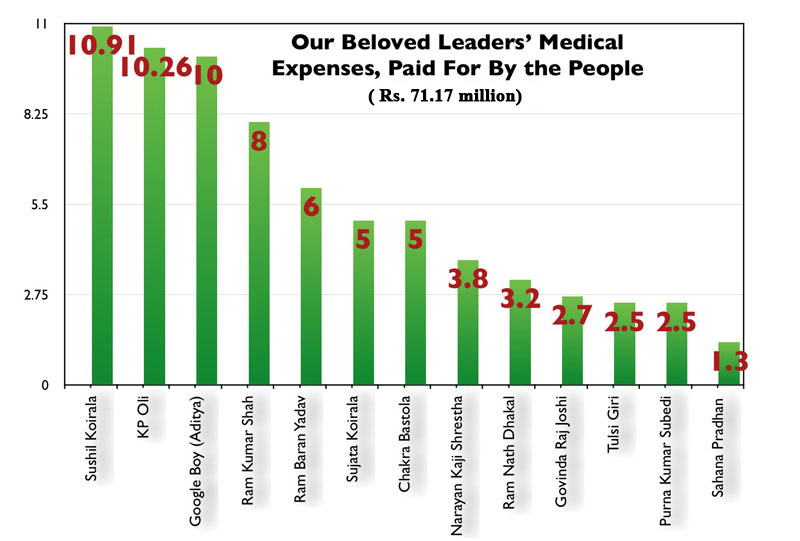 The government of Nepal has doled out more than Rs 71 million to nearly a dozen politicians in the name of medical expenses over the last decade or so. A report received by Republica reveals that politicians including former Prime Ministers and President received a total of Rs 71.17 million from the state coffers for medical treatment abroad on the basis of Cabinet decisions.

The Commission for the Investigation of Abuse of Authority (CIAA), the constitutional anti-graft body, is not allowed to investigate the decisions of the Cabinet. Moreover, the individuals receiving the money in this fashion do not have to submit the expense details.

Social sites like Facebook and Twitter are filled with angry messages from the public about such blatant misuse of the tax payers’ money in the name of medical treatment of the politicians who are believed to have millions in their personal bank accounts. Many are asking why the leaders have to go abroad for treatment when the country’s top hospitals have VVIP medical lounges for their treatment.

Among the top recipients are former prime ministers Sushil Koirala, KP Sharma Oli and the Google Boy (Aaditya); they received Rs 10.91, 10.26 and 10 million respectively. Other politicians not in the list who also received money from the state include Mahendra Yadav (0.788 million), Lokendra Bahadur Chand (0.50 million), and Ram Sharan Mahat (0.28 million).

Send us your reaction about the government’s decision to provide money to leaders for their medical expenses. 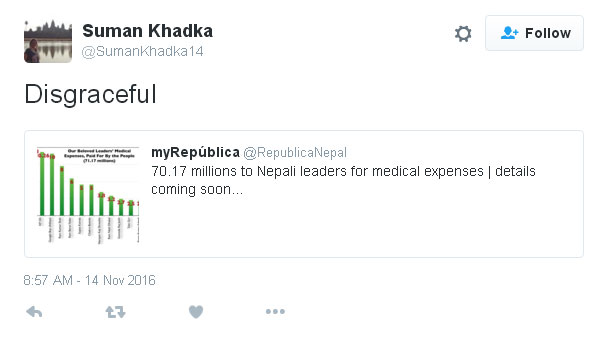