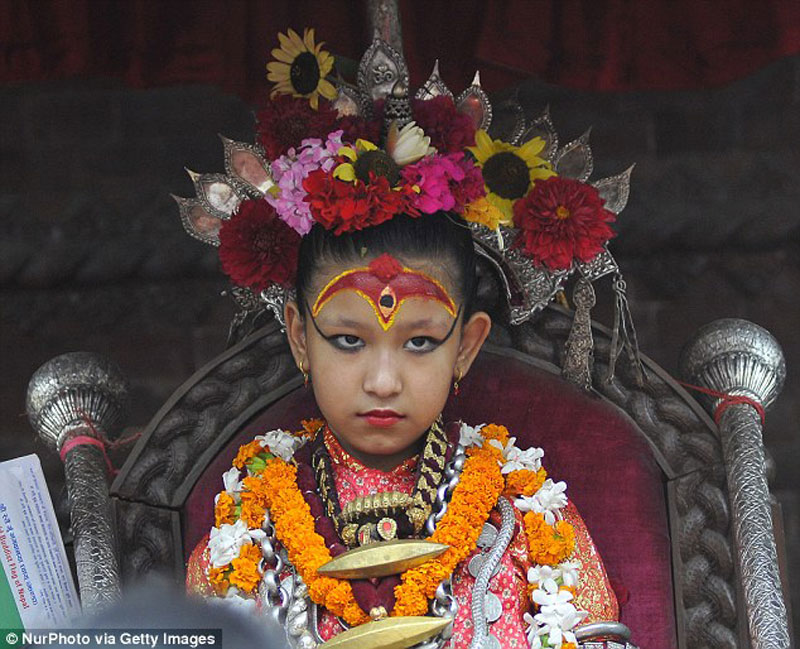 Yunika was chosen to be the Kumari when she was a toddler. Her parents gave up their jobs to be her full-time carers .

LONDON , Sept 9 : A seven-year-old girl in Nepal was selected to be a living and breathing goddess when she was just a toddler due to having 'eyelashes like a cow' and a 'voice as clear as a duck.'

The goddess or Kumari continues the centuries-old tradition of child deities living among mortals in Nepal where she is worshiped by Hindus and Buddhists alike.

At the Hindu festival of rain in July thousands came to pay their respects to the child including the Prime Minister of Nepal, Pushpa Kamal Dahal, who had to bow and scrape to the child when the pair met.

Despite her lofty status the seven-year-old, who is called Yunika and is said give good luck to all those who lay their eyes on her, still lives with her parents.

'When my daughter was selected as a Kumari, I felt very happy,' her father, Ramesh Bajracharya, said through a translator.

'It's because Kumari is hugely regarded and respected living goddess in Nepal.'

The girl's parents left their jobs in the town of Patan to become full-time carers to their daughter which has proven to be a tricky task as the Kumari are not permitted to leave their homes, except for special occasions, and her feet are never allowed to touch the floor.

Yunika's mother has become something of a make-up artist having to apply unique patterns on her face that mark her out as goddess among mere men.

'I feel little sad that other children play outside, but her friends do come to play with her inside.

Whatever she demands, dolls or any plaything, we fulfill her demands' her mother Sabita said.

To become a Kumari, which means 'unmarried girl' or 'virgin,' children must meet very specific criteria such as sporting 'eyelashes like a cow,' 'thighs like a deer,' and a 'voice as clear as a duck.'

Even if the youngster has all of the aforementioned characteristics her astrological chart must be considered favorable to the King of Nepal's.

She will also be tested for signs of fearlessness and serenity before she is adorned with the title.

Once a girl is chosen, she is considered an incarnation of the Hindu goddess Durga.

However, Yunika shouldn't get used to Prime Ministerial visits, adoring crowds and the opulent lifestyle that goes with her current status because as soon as the Kumari hit puberty they revert back to a being normal member of society.

Speaking to ABC's Nightline, which will air a documentary on Yunika on Friday evening in the US, former Kumari, Rashmila Shakya, said she found it quite difficult to adapt admitting even walking proving to be a challenge.

'When I was a Kumari, (I was not) allowed to walk outside. So it was a little bit uncomfortable when, after I retired from the Kumari house, a little uncomfortable walking on the road,' said 32-year-old Shakya.

Shakya also dismissed the superstition that the men who marry the Kumari are destined to die young.

'All of the ex-Kumari are married. And I just married six months ago. This is only a rumor.' Reverting back to a normal human being is wherein the key difference between the Dali Lama and the Kumaris lies.

The Dali Lama, the living deity of Tibet, is a god for the duration of his life and his soul is reincarnated into a new male child at death.

In 2008 Nepal's Supreme Court overruled a petition to end the practice, citing its cultural value although some activists claim the tradition is child labor.

The practice's purpose has taken on a great cultural role in Nepal since a 7.8 earthquake rattled the landlocked country in April 2015.

Around 8,000 people were killed and the tremor reduced many ancient buildings to ruble.

KATHMANDU, Sept 13: Kwaneya, the first day of the chariot procession of the Living Goddess Kumari and the most important day of Indra Jatra,... Read More...