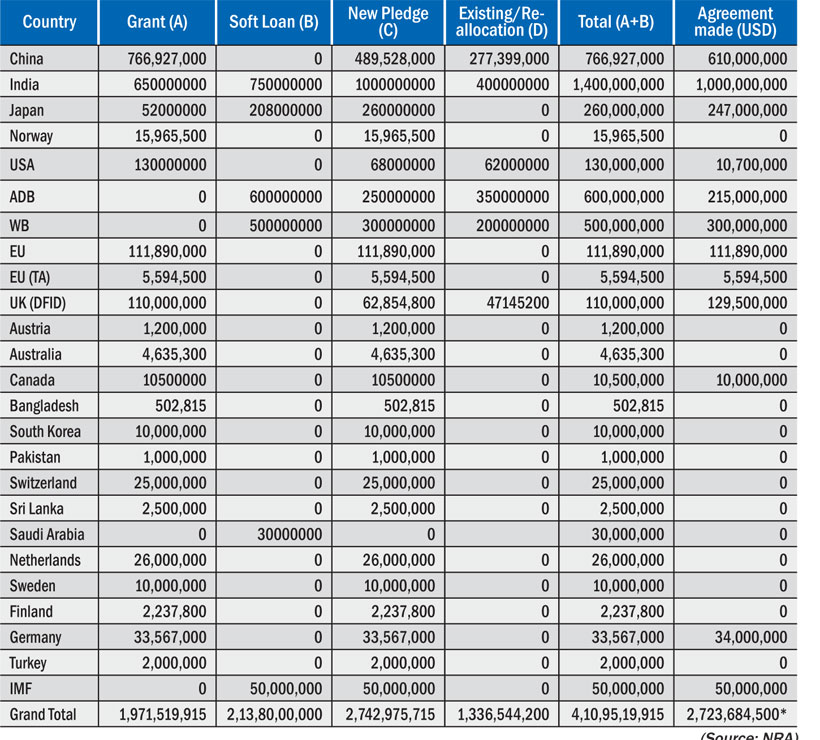 -Less than half the signed-up amount received
KATHMANDU, Oct 5: Although Rs 938 billion has been estimated as the total amount needed for the overall task of post-earthquake reconstruction and rehabilitation, the National Reconstruction Authority (NRA) has signed agreements with various donor agencies for only Rs 272 billion so far, 18 months into the aftermath of the devastating earthquakes.

Speaking at a meeting of the NRA's Advisory Council on Tuesday chaired by Prime Minister Pushpa Kamal Dahal, NRA Chief Executive Officer Sushil Gyewali said that agreements for only Rs 272 billion have been signed so far and the government still needed Rs 666 billion to complete the overall task of earthquake reconstruction and rehabilitation as per its five-year reconstruction plan.

During the international conference on Nepal's reconstruction held last year, various countries and several  donor agencies had pleaded to provide Rs 410 billion, but the NRA has been able to sign agreements with donors for only Rs 272 billion so far.

On the top of that the agreements with the donor agencies are yet to reach the implementation phase, according to NRA officials.

“The agreements are just limited to paper for now and are yet to reach the implementation phase,” said Bhisma Kumar Bhusal, NRA deputy-spokesperson.

He said that the NRA has not been able to expedite the reconstruction of heritage sites and other damaged physical infrastructure as the agreements are yet to reach the implementation phase.

“We signed a grant agreement with India for Rs 100 billion months ago but we have not yet seen the money as the Indian side has been dilly-dallying in sending us the project agreements," he said.

Ram Prasad Thapaliya, joint-secretary at the NRA, said the Indian side is yet to give the agreed amount and Rs 66 billion out of the Rs 272 billion has already been spent on relief and rescue.

Likewise, it is estimated that the remaining Rs 61 billion will be needed for reconstruction of roads and drinking water infrastructure and Rs 26 billion for gender equality projects and social security funds.

During the donor conference, altogether 25 countries and donors pledged to provide around Rs 410 billion. But as of now, countries including Norway, Austria, Australia, Bangladesh, South Korea, Pakistan, Switzerland, Sir Lanka, Saudi Arabia, Netherlands, Sweden, Finland and Turkey are yet to sign agreements with the government of Nepal for providing the pledged money.

The NRA Advisory Council on Tuesday formed a Foreign Aid Facilitation and Coordination Committee under CEO Gyewali to collect the funds pledged by the donors and to seek new avenues of funding to meet the estimated total requirement of Rs 938 billion.