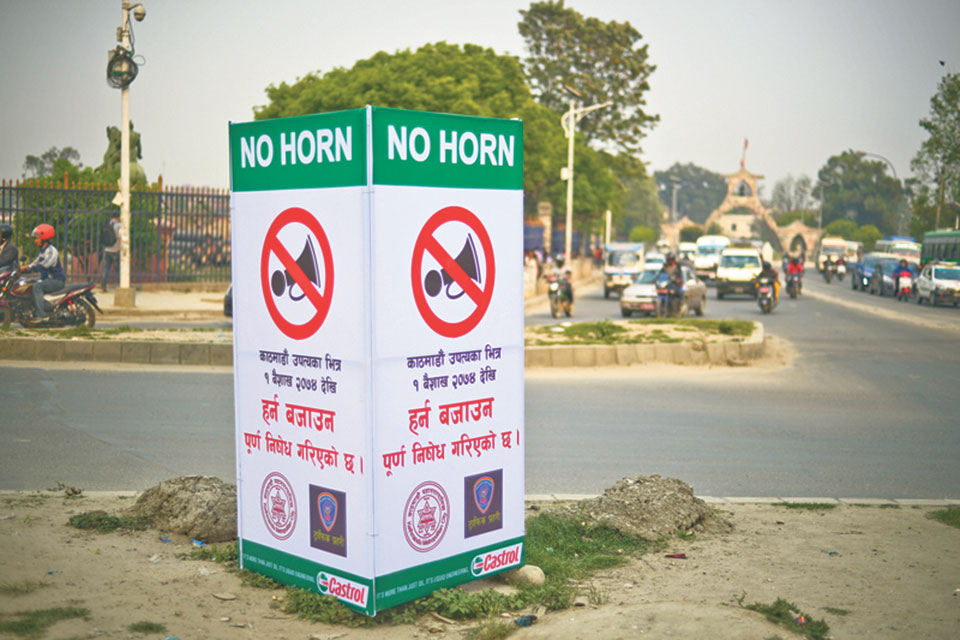 KATHMANDU, June 25: Over 41,000 drivers have been booked for violating the 'no-horn' policy in the Kathmandu Valley ever since this policy was introduced on April 14, 2017.

According to the Metropolitan Traffic Police Division (MTPD), altogether 2,330 offenders were fined for honking in the Valley till mid-June this fiscal year. The number of offenders booked between April 2017 to mid-July 2018 stood at 39,186.

Deputy Superintendent of Police (DSP) Padam Bahadur Bista at the MTPD, Ramshah Path, said traffic police have stepped up action against those violating the 'no honking' policy in recent months.

“A comparison between the present data and the previous ones shows that the number of people fined for violating this rule has gone down. This could be a result of the increasing awareness on the no-horn policy among the drivers,” said DSP Bista, who is also the spokesperson for the MTPD.

If one is found blowing one's vehicle's horn unnecessarily, then one has to pay a fine of Rs 500 which one has to deposit at Global IME bank and that money is saved in the government's account. Officials said that the government has raised Rs 20.75 million in fines from those violating the no-horn policy since this was first introduced a little more than two years ago.

Traffic Police In-Charge at Durbarmarg Traffic Police Office, Inspector Daya Krishna Bhatta said they had been able to achieve a modest success in reducing the instances of honking on Kathmandu's streets. “Most drivers followed this rule strictly in the initial days. However, as the implementation of this rule slackened, we are again taking action against those honking. Most drivers seem aware about this rule now,” he said. The traffic police had introduced the no-horn policy in Kathmandu as most drivers used to unnecessarily honk in public places, causing a serious noise pollution. Since this was a new policy, it took quite sometime for the people to accept it since pressing horns randomly had not only become a habit but also developed as a culture.

Shyam Prasad, who has been driving public buses in the Valley for the past 17 years, said he was able to see a lot of change in driving practices. “I fully support the no-horn policy and abide by all the rules,” he said, while urging fellow drivers to follow the no-horn policy.

Even ordinary people in the Valley have also started feeling the difference after this no-horn policy was implemented. “Earlier, the drivers used to honk carelessly. But for the last few years, I have felt a big change. Only yesterday, traffic police booked two drivers for  honking unnecessary,” said Harka Maya Shrestha, a street vendor selling flowers and puja (worship) materials on the Bhadrakati Temple premises.

KATHMANDU, Dec 26: The Kathmandu Valley has experienced a bit chilly day today with the mercury dipping to 0.9 degree,... Read More...

KATHMANDU, August 13: The Department of Transport Management (DoTM) has decided to strictly implement the provision of two drivers on... Read More...

KATHMANDU, Jan 24: A government-run project to manage waste from the Kathmandu Valley has failed to make headway for months.... Read More...