Education here has become a tool to perpetuate inequality 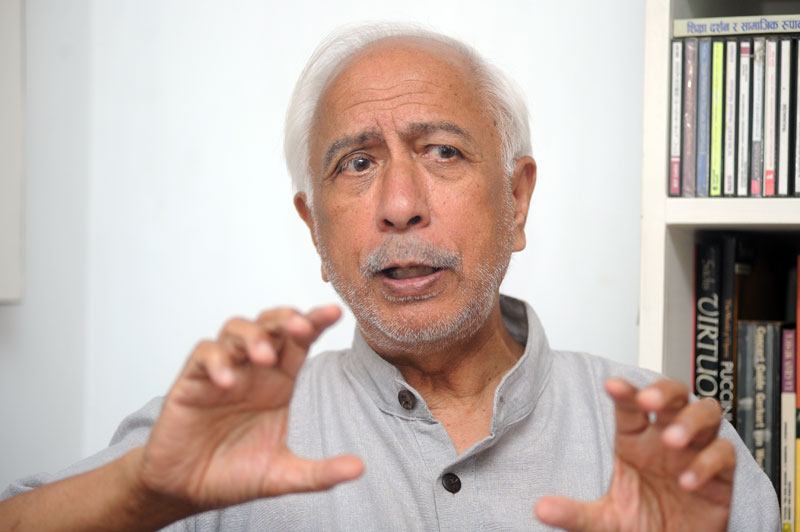 Kedar Bhakta Mathema, former Vice-Chancellor of Tribhuvan University, had recommended letter grading system to replace the marking system in the annual SLC exams way back in 2004. He has also been advocating for reforms in school and university education systems. How does he evaluate the new letter grading system? And what are the broader problems with Nepal’s education system? Republica’s Biswas Baral and Mahabir Paudyal met Mathema at his Sanepa residence for his inputs.

First of all, a letter grading system has replaced the old marking system in SLC exams. How do you see this change?

I am happy. I must own this system because this was one of my recommendations to the government back in 2004. I led a study team on student performance in SLC. We had recommended letter grading and single subject certification, whereby a student need not excel in all the subjects. We had also called for abolition of ‘pass’ and ‘fail’ categories. We had asked for an alternative examination system to clear the backlog of unsuccessful students, revaluate the system of awarding grace marks and take concrete action to restore public faith in SLC examinations. Our recommendation was not only for letter grading system. Other recommendations have not been followed. But it would have been even better if letter grading system were introduced near the start of schooling.

Why is letter grading system important? How does it help students?

The number system is not scientific. This is why many countries have dumped it. There used to be eight papers in SLC exams. If a student failed in one, his prospect of joining higher studies or getting a job would be lost then and there. Once they failed in one or two subjects, they would have to live with the stigma of being “unsuccessful” for the rest of their lives. Under letter grading system, even if a student is deficient in one or two subjects he can pursue further studies in the subjects he is good at. But this system has also placed addition responsibility on higher secondary institutions. Unlike the past, even moderate students can enroll for higher studies. These institutions can conduct orientation classes for higher studies in subjects like mathematics and English. Students who come from public schools of villages need such courses to correct their deficiencies. This is what higher studies institutions in the West do. Such courses are essential to enable village students to compete against students of urban schools.

Isn’t it premature to introduce letter grading when many schools are in no position to run grades XI and XII?
Regulations to integrate XI and XII grades with regular schooling were introduced way back in 1991. Every higher secondary school should have expanded their base up to grade one by now. Stand-alone plus-two colleges should have been non-existent. Back in 1991, it had been established that grade XI and XII belong to the school system, not university system. Then we started phasing out Proficiency Certificate Level from the university system. Twenty five years later, we are still discussing what to do with plus-two colleges. Twenty five years later, we are worried that schools will be unable to run grade XI and XII classes. This is frustrating.

Then what could have been done realistically?
The teachers working in high schools should have been provided opportunities to pursue higher degrees so that they could run higher classes in their schools. Today they would already have been running grade XI and XII classes in their respective schools. We changed the system but did not work to improve competence of teachers. Instead the government gave free reign to private sector. As a result most ten plus-two schools in urban areas are beyond the reach of students from villages.
Only 17 percent college-going age students pursue higher education in Nepal, which is way below international standard. At least 30 percent students should make it to higher education system for sustainable development. The corresponding percentage for developed country is between 60 and 70. When you go to university, it also helps you to rise to a middleclass status because you have better opportunities to earn. This is not happening in Nepal. We do not have a broad middleclass. Around 70 percent of the middle class in Nepal is just above the poverty line. They could easily fall back into poverty.

So in your view class and educational status intersect?
The larger the middleclass, the greater the prospect of stability and institutionalization of democratic values in that country. Why didn’t the size of middleclass increase in our country? Because our education hindered the process of middleclass formation, instead of helping it. Of 100 students who enter grade I, only 13 pass SLC exams, which means the education system has failed the vast majority. How will they climb to up the economic ladder without education? Our education has not helped such social mobility.

Has allowing the private sector into education made things worse?
If private sector has contributed to our education system is a separate issue, but it has certainly promoted inequality in education outcomes. The rich send their students to good schools. So they do not care about the public school system. So the quality of education of public schools suffered. Let me explain with an example. We need to go somewhere so we need a means of transport. The government could improve our public transport in which case we would be happy to take the public bus. But the government instead provides you with incentives to buy motorcycles and cars. You and I can now travel. But what happens to the rest? They will never reach their destination. The introduction of private schooling system had a similar effect on Nepali society.
First, public education system was not improved so as to help with interclass mobility. And in the name of privatization, the government only increased the divide between the rich and the poor. Education is the only tool to address inequality. Here it has become a tool to entrench inequality.

How do public schools help with social mobility?
Public schools help build a cohesive society. In a country like America, which we call the Mecca of capitalism, about 90 percent students go to public schools. Ninety three percent do so in the UK, 94 percent in Canada, and about 98 percent in Singapore. Why? Not because they cannot afford private schools but because they want to develop cohesive societies.
Back in our school days, the sons of merchants and businessmen and the sons of peasants and laborers attended the same school. A son of an aristocrat and the son of a farmer would be sharing the same desk. They would read together and compete for excellence. Only when you reached higher grades did you get to know who is rich and who is poor. Look what happens today. The sense of class consciousness haunts children the moment they enter schools. The sons and daughters of the poor will know instantly why they have been placed in public schools. Private school system has created such a wide rift between rich and poor students.

In your view do you think the way we teach our students in Nepal is also faulty?
You have raised the most important issue. Knowledge has several layers. Education should enable learners to navigate all these layers. Recollection of facts is at the lowest layer. Above it are analytical skills, opinion giving, problem solving and creativity. We have not taught our students these vital skills. We have only been teaching how to recollect facts in our schools and universities. Recollection of facts is the least required thing today because facts are only a click away. What we need to do is enable students to use information creatively. We teach students only the lowest level of cognitive skills. Our focus has been on rote learning. Besides, we have started specialization from as early as grade XI or XII. It should start only from the university level. Our courses should be interdisciplinary. We need liberal education.

Finally, how do you assess the eighth amendment of Education Act 1972 which the parliament recently passed?
There are some positive things in this amendment. It has made education up to grade eight free and compulsory. If implemented, it will automatically abolish child labor. There is a provision for new schools only under guthi system, which is similar to the idea of management under a trust. We have given free rein to private sector in education. Private sector runs schools even in the West, but not to make profit. Even Harvard and Stanford are private universities, but they don’t make profit. They instead plough back into the university system whatever they earn. We need a similar system in Nepal. Therefore the idea of a trust system is welcome. Nepal’s education system can be improved. All that we need is political commitment.

Teach For Nepal Walkathon, presented by Citizen Bank, saw a participation of more than 700 young professionals and students from... Read More...