Sunil Pokharel on US tour with two solo plays 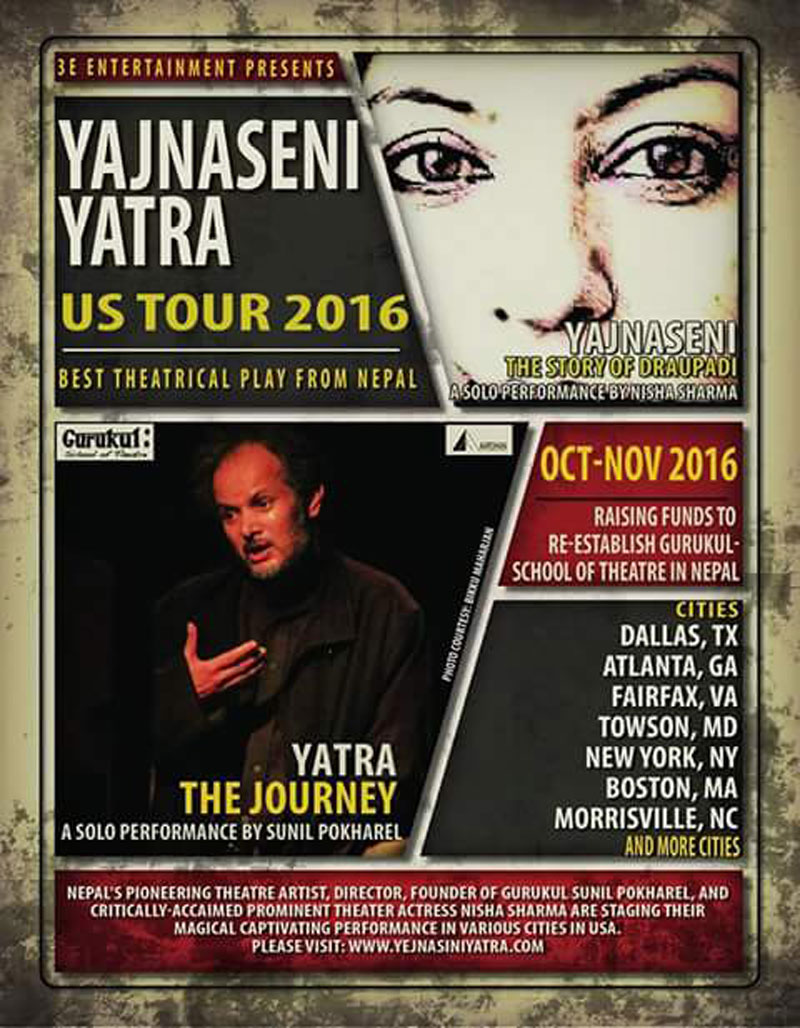 KATHMANDU, Sept 29: Nepali actor and theater director Sunil Pokharel has set off for a two and half month long US tour to showcase two solo plays – ‘Journey’ and ‘Yajnaseni: The Story of Draupadi’. He is joined by his wife, actor Nisha Sharma, and his son Nishansh Pokharel on the tour.

Upon the invitation of an organization composed of non-residential Nepali living in US, Pokharel and team are scheduled to perform at eleven venues in US including Dallas, Atlanta, Fairfax, Tucson, New York, Boston, Marysville and San Francisco.

Adapted from Indian author Pratibha Roy’s 1995 novel, ‘Yajnaseni’ will feature Nisha Sharma as Draupadi in a 55 minute long one-woman-show. Sunil Pokharel is directing the show.
Similarly, Nishansh Pokharel will direct his father for a solo performance in ‘Journey’.

According to Nishansh, ‘Journey’ is a “loosely scripted” and “highly improvised” play inspired from his father’s own life. “There’s no hardbound script and everything is left to improvisation. With each performance, we’re going to add something different to the show,” said Nishansh.

KATHMANDU, August 1: A 24-men-squad for Japan tour has been announced on Tuesday. The head coach of national football team... Read More...

Private hospitals in Kathmandu charging up to Rs 50,000 per bed a day for COVID-19 treatment
18 hours ago

O Brahmaputra and Bagmati, how can you flow?
17 hours ago

Hotels providing quarantine services can charge no more than Rs 3,000 per person a day
18 hours ago

How Hukam derailed Nepal’s vaccine procurement: a story of power, greed and commission
42 minutes ago

How Hukam derailed Nepal’s vaccine procurement: a story of power, greed and commission
42 minutes ago

O Brahmaputra and Bagmati, how can you flow?
17 hours ago