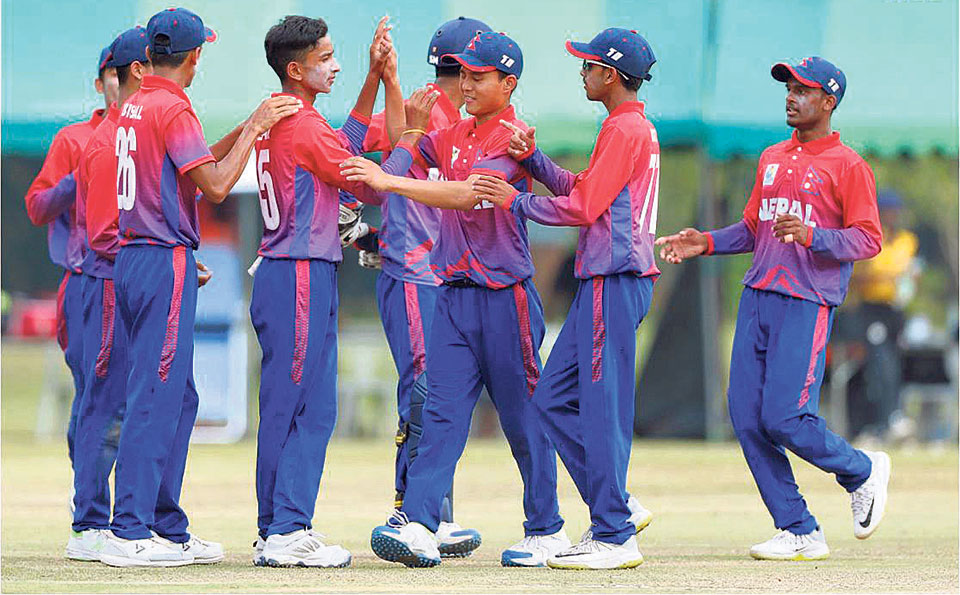 Players of Nepal U-16 cricket team celebrate their win over Malaysia U-16 in the final of the ACC U-16 Eastern Region Tournament at the Prem Tinsulanonda International School Cricket Ground in Chiang Mai, Thailand on Sunday. Photo Courtesy: ACC/Twitter

In the final match played at the Prem Tinsulanonda International School Cricket Ground in Chiang Mai, Bohora’s all round performance helped the team continue its dominance in the tournament giving his team a second straight title.

Bohora played brilliantly in the final as he claimed four wickets for Nepal giving away 23 runs. Nepal had also beaten Malaysia in the last edition to win the title.

Other Nepali batsmen could not reach the double figure as the team struggled to get the runs it had made in other games, but its splendid bowling performance helped by Bohora’s crucial haul got the win for Nepal.

Nepal was in a critical situation of 33-3, but Mahat and KC came as a rescue for the team with a partnership of 35 runs.

In reply, Malaysia was under pressure throughout its inning as it could not hit big runs to trouble Nepal. For the team, who lost all its wickets in 34.5 overs, Muhammed Hajik scored the highest 16 runs, while Wan Muhammad Wajan also contributed 16 runs for the team.

Likewise, Mureli scored 14 runs for the team, but no other players could get to the double figure and Malaysia lost miserably.

Earlier, in the group stage matches, Nepal had defeated Malaysia by 39 runs.

Captain KC was adjudged the best player of the series, while Singapore’s Girin Rahul and Malaysia’s Hetij were named the best batsman and the best bowler of the tournament, respectively.