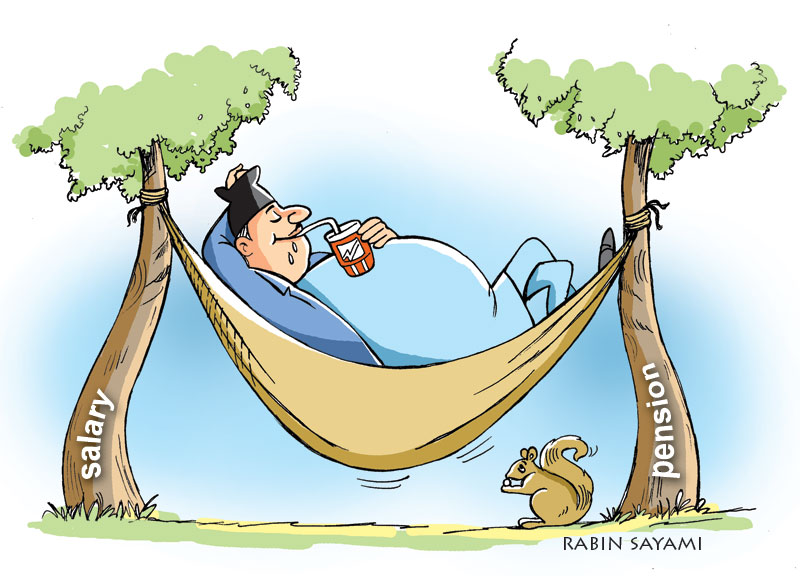 Clear legal provisions lacking
KATHMANDU, Sept 27: Retired government employees, particularly of the higher ranks, are re-appointed at different government entities and also as consultants by different government-run projects. The double facilities they enjoy in the form of their pensions and their new remunerations are now being questioned.

According to estimates, such retired civil servants take home a total of approximate Rs 400 million annually in addition to their regular pensions. A few of them have foregone their pensions, citing ethical issues.

There are over 1,000 such retired civil servants and all but a few of them have been enjoying the dual benefit-- pensions and salaries as consultants -- because there are no clear legal provisions that would be applicable. It has been over a decade since this issue came to the fore. The bureaucracts themselves are not keen to take it up as they too might be contemplating taking advantage of such revolving door arrangements once they retire, a government source claimed.

Appointment of retired government employees also takes place at constitutional bodies though the numbers are small. Reappointing of retired staff is hard to justify at time when hundreds of educated unemployed are leaving the country to take up menial jobs abroad, said one government official protesting the growing trend of reappointing retired civil servants.

Retired civil servants take home a minimum of Rs 400 million annually on top of their pensions
Calculations show that they receive a minimum of Rs 30,000 every month, apart from Dashain bonus.

Ex-civil servants are appointed as consultants mostly at donor-funded projects. Sources claim that there might be conflicts of interest as decisions concerning such projects may be taken  by the civil servants with an eye to consultancy prospects after their retirement.

A source privy to records  at the Ministry of General Administration claimed that the bureaucrats do not want to see laws that affect themselves directly. "We have no records on appointment of consultants as the project managers hire consultants in coordination with the donors," added the source who also estimated the number of such consultants to be above 1,000 at least.

Chief Commissioner at the Information Commission Krishna Hari Baskota, who is a retired government secretary, has foregone his pension. Talking to Republica, he said, it's an ethical issue, and there may not be a law for every single thing.

Earlier, the Office of the Prime Minister and Council of Ministers (OPMCM) had issued a circular asking retired government employees not to take both facilities upon subsequent re-appointment.

But there were protests against the circular and it has been challenged in court. The issue is now  sub judice.

Consultancy appointments are made mostly at the ministries dealing with infrastructure projects like  roads, irrigation, urban development and energy. Joint Secretary at the Department of Roads Gopal Sigdel said that several consultants, particularly engineers, are appointed through consultancy firms and private companies.  Consultants are appointed in coordination between development partners and the government or through the development partner directly.

KATHMANDU, Aug 4: Nepal Airlines Corporation (NAC) is planning to conduct a due diligence audit (DDA), for which it has called... Read More...

KATHMANDU, Sept 16: The government has agreed to amendments in the Memorandum of Understanding (MoU) on the construction of the  Nepal... Read More...

Rapid Diagnostic Test not reliable: WHO Nepal Office
14 hours ago

World is changing
12 hours ago

PM Oli addresses the nation (with video)
10 hours ago