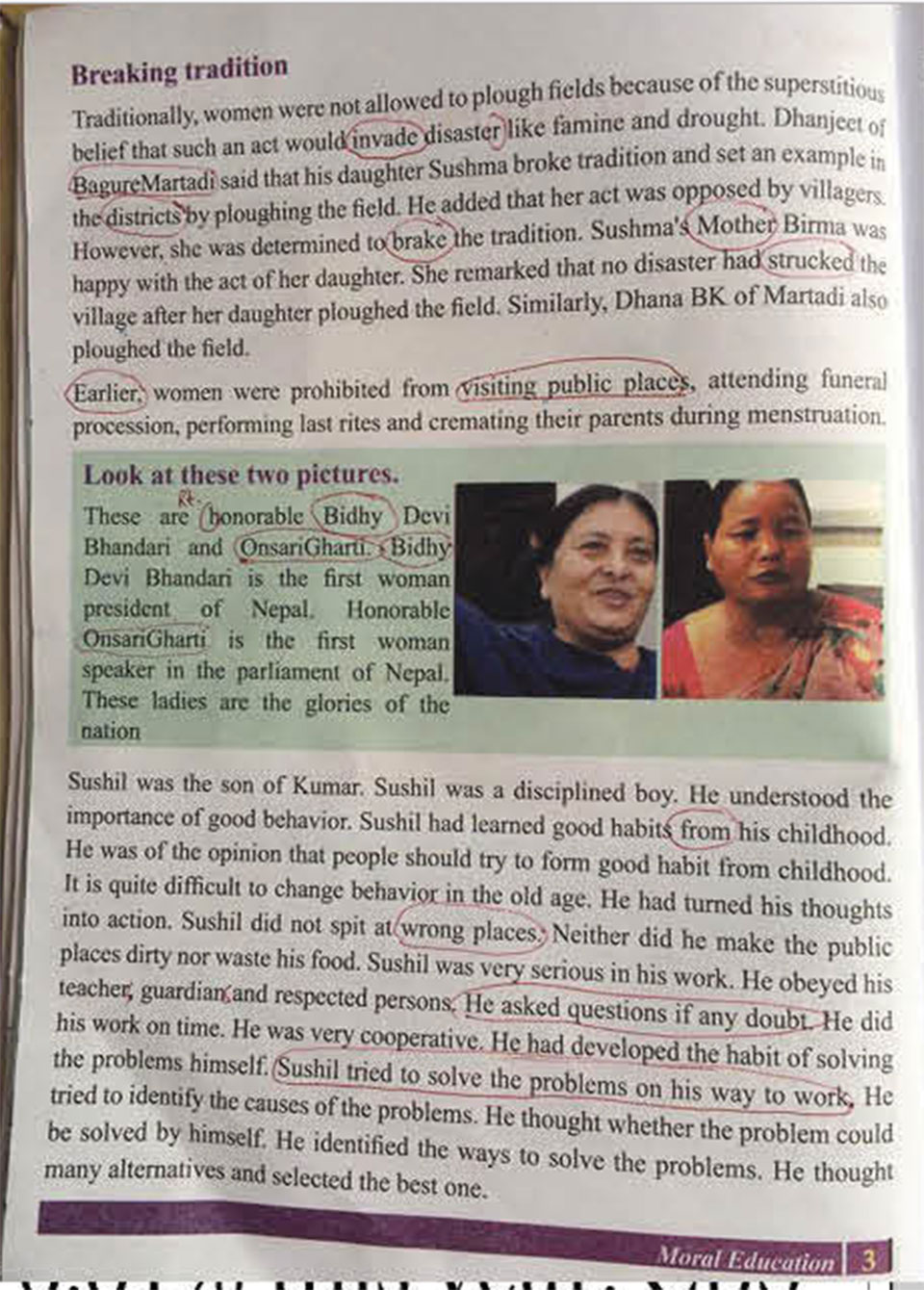 KATHMANDU, April 27: The government has shown negligence over multiple errors in the textbooks for private schools, which were given to students at the beginning of the new academic session.

The Moral Education textbook for Grade 6 written by Prof Dr Shreeram Prasad Upadhyaya and published by Trijyoti Prakashan, Kathmandu contains multiple errors including in the name of the president of Nepal.

Amar BK, guardian of a student at Pokhara-based private school, complained about the textbook errors on his Facebook status. “What will our wards learn from such textbooks?” he wondered, adding that he felt quite disheartened .

Several errors can be traced, including in spellings, the names of the president and a former speaker and intended meanings. Bidya in Bidya Devi Bhandari has been printed as Bidhy in the Grade 6 Moral Education textbook.

The book has been prescribed by many private schools in different parts of the country, according to the Guardians' Association of Nepal (GAN). The Curriculum Development Center (CDC), the government body that regulates textbooks and textbook writers, is responsible for avoiding such blunders, said Suprabhat Bhandari, former president of GAN. “If it is the mistake of the curriculum development committee, the government will be held responsible . If it is the mistake of the publisher, the publisher should face the music,” he added.

Prof Upadhyaya could not be reached by phone and the publisher was also unavailable for comment.

A committee headed by the CDC chief looks into textbooks before allowing their publication , according to the Ministry of Education, Science and Technology (MoEST). Textbooks are renewed in a cycle of every three years.

Dr Lekha Nath Poudel, director general at CDC, said that he was unaware of the errors . “We assign three experts to vet the textbooks . However, they might not be reading every single line in the textbooks,” he added. “We will look at the books and the errors. We can then call them in to make corrections.”

The national curriculum development and evaluation committee , which makes policy and approves the curriculum, is headed by the education minister. Giriraj Mani Pokharel is the present incumbent .

What next as Lamichhane steps down from the ministerial position and party president ?
12 hours ago

In Pictures: Demonstration held in support of Rabi Lamichhane
7 hours ago

Flights at TIA resume after two hours
59 minutes ago