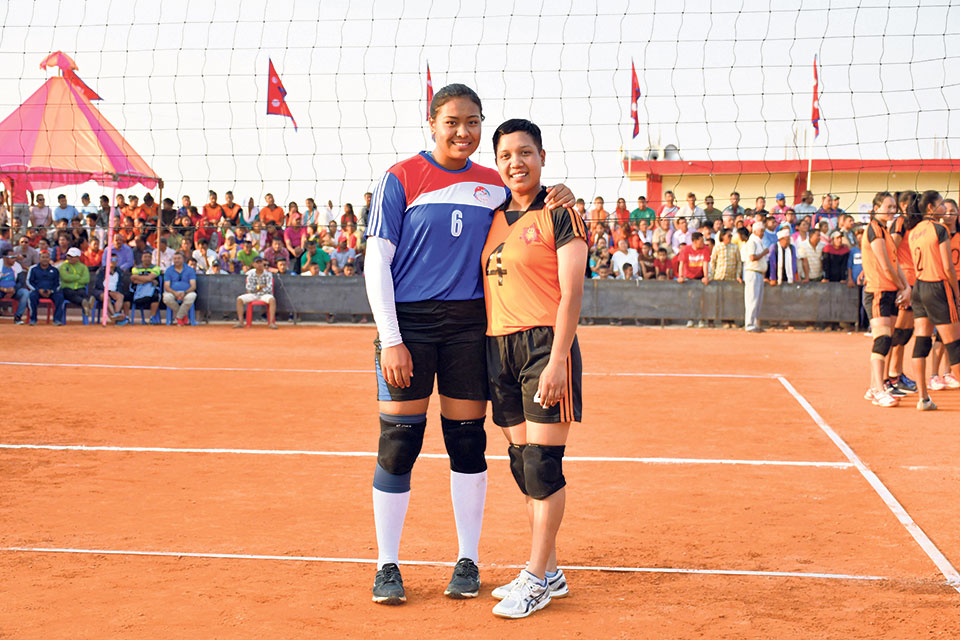 Kripa Adhikari and Pratibha Mali pose for a photo at the Khajura Volleyball Court during the Eighth National Games in Nepalgunj, Banke on Sunday. Photo: G Thapa/ Republica

NEPALGUNJ, April 22: It was a strange moment Saturday for Nepal’s national volleyball player Kripa Adhikari to prepare for a volleyball match against Province 3, which features majority of New Diamond Academy players -- her former teammates -- in the ongoing Eighth National Games at under-construction Khajura volleyball court in Banke.

Adhikari, who entered her second national volleyball tournament after completing her transfer from New Diamond to Tribuvan Army Club last year, is still adjusting to shenanigans of her new team and members.

“Sometimes it feels like I am still a part of Diamonds (New Diamond). I guess it will take a bit of time. I am working on tactics and playing style of my new team,” said the leading women spiker who shared smiles with her friends Pratibha Mali and Panamika Rai before the match.

“Everyone is my friend outside the court. But inside it, all I want to do is give my best for my team to win. Army is my team now. I want to win the trophy for this team.”

Adhikari served eight years in New Diamond before making her move to the much lucrative departmental team which secures a player’s financial stability. Unfortunately, many players are suffering due to poor financial situation of private and state teams in Nepal.

“We are working hard to play our best; the coach is also working hard on tactical and strategic parts,” said Adhikari after the win.

Adhikari, along with Mali and Panamika, made a star-trio for the New Diamond team which challenged every departmental team in the past. Also national team members, the three best friends continue to adjust their games without each other. Nick-named ‘cool setter’, Adhikari fondly remembers her glory days with the former club wining most of the trophies with the team where she spent most part of her life so far.

Adhikari is relishing the new challenge and dreams to win a trophy with Army to build new memories. “The color of the jersey has changed, the number has changed, but my hunger to be continuously successful has not. For whichever teams I play, I am always willing to win the ultimate trophy,” she said.

The Ill-planned Roadside Plantation in Kathmandu
13 hours ago