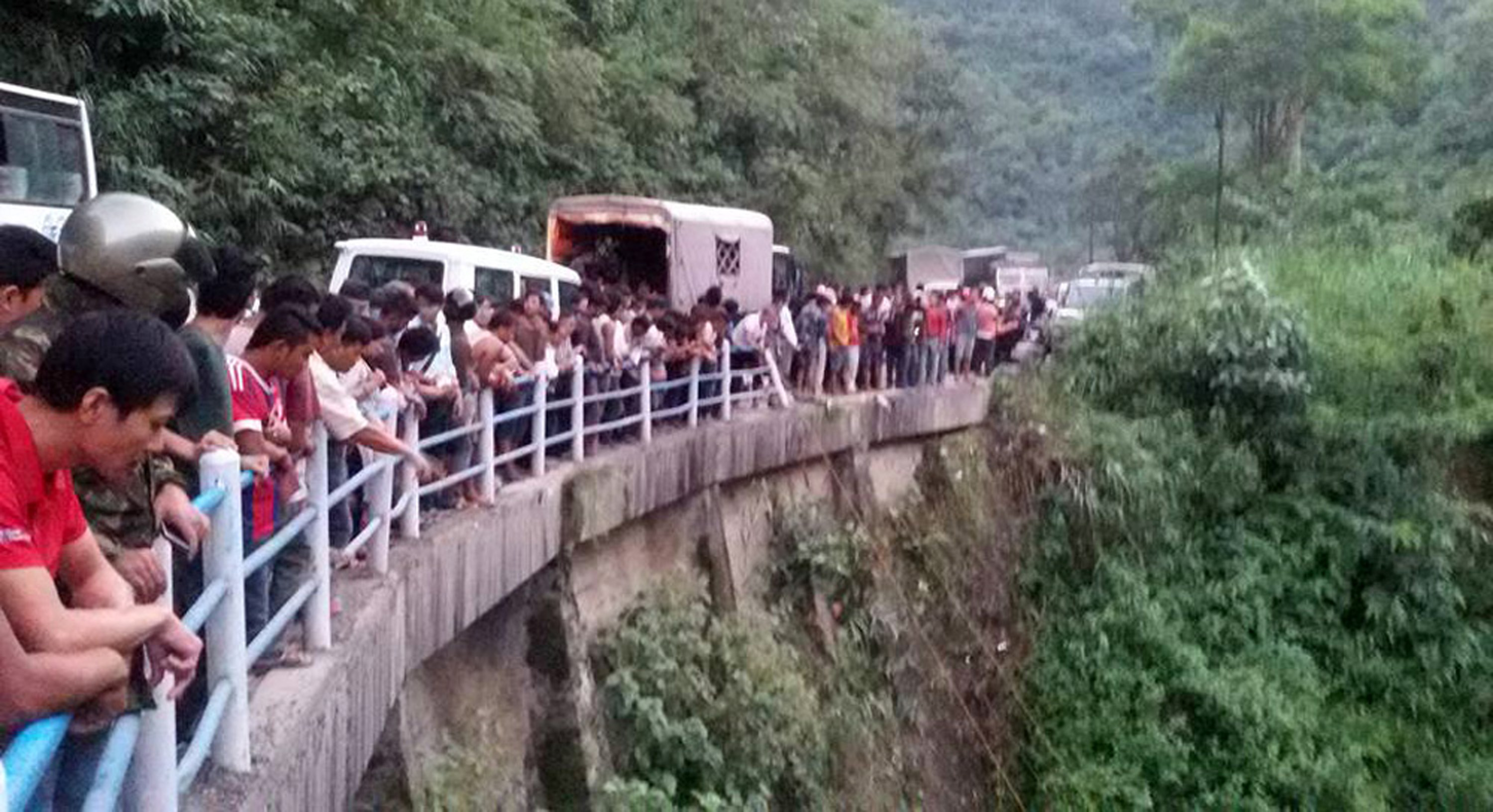 Onlookers watch the Bolero being pulled from the Trishuli River at Ghoptebhir along the Prithvi Highway in Chitwan. (Narayan Adhikari/Rss)

KATHMANDU, Sept 25: Former home minister and chief secretary Madhav Prasad Ghimire has gone missing along with two others on Sunday after a car carrying seven people plunged into the Trishuli River on their way back to Kathmandu from a pilgrimage to Muktinath temple. Bodies of three killed during the mishap have been recovered while one lucky survivor was rescued from the site.

Ghimire had left for Muktinath on September 21 to perform Sharadda, an annual event to pay tribute to the deceased ancestors, in Kagbeni along with his mother, brothers and relatives, according to his family sources.

According to Chitwan-based Armed Police Force (APF) Disaster Management Training Centre, Kurintar, the three bodies recovered from the incident site have been identified as that of Chaitanya Kumari Ghimire, the mother of the former minister, Sub Inspector Ram Chandra Karki, his body guard and Narayan Prasad Kafle, his nephew and vice president of Kafle Samaz.

Superintendent of Police (SP) Ganesh Bahadur Thapa, chief of the APF training center, said that the car, Ba 9 Cha 1531, had plunged into the river at Ghoptebhir of Chitwan district at around 4:30 pm.

“The road section was sloppy, with a minor turn and with no bar on the roadside,” said the police officer, adding that the bar was damaged by a truck that fell into the river from the same spot about two weeks ago.

The authorities are yet to investigate the cause of the mishap as the lone survivor is still receiving treatment at Bharatpur Hospital.

“But preliminary statement from the driver identified as Bishnu Rai says that former minister Ghimire was driving the car by himself as it slipped off the road all of a sudden,” CDO Singh quoted the driver's statement.

According to the driver, the former minister had started driving from Damauli asking him to take rest as he had been driving for a long time.

Born in Tansen-12 of Palpa district, Ghimire was appointed chief secretary of the government in July 2009. He had become secretary in September 2005.

In 2013, Ghimire was appointed as a key minister to hold the second Constituent Assembly elections under the government led by the then Chief Justice Khil Raj Regmi. The former home minister Ghimire's election security plan was highly applauded for creating conducive environment for the election at such difficult political situation.

DHADING, June 9: The driver along with one of his two accompanies are missing after their truck veered 90 meters off... Read More...

21 among those killed in Trishuli bus plunge identified

CHITWAN, Aug 27: Among those 22 killed in the Trishuli bus plunge on Friday morning, the identities of 21 have been established. Read More...