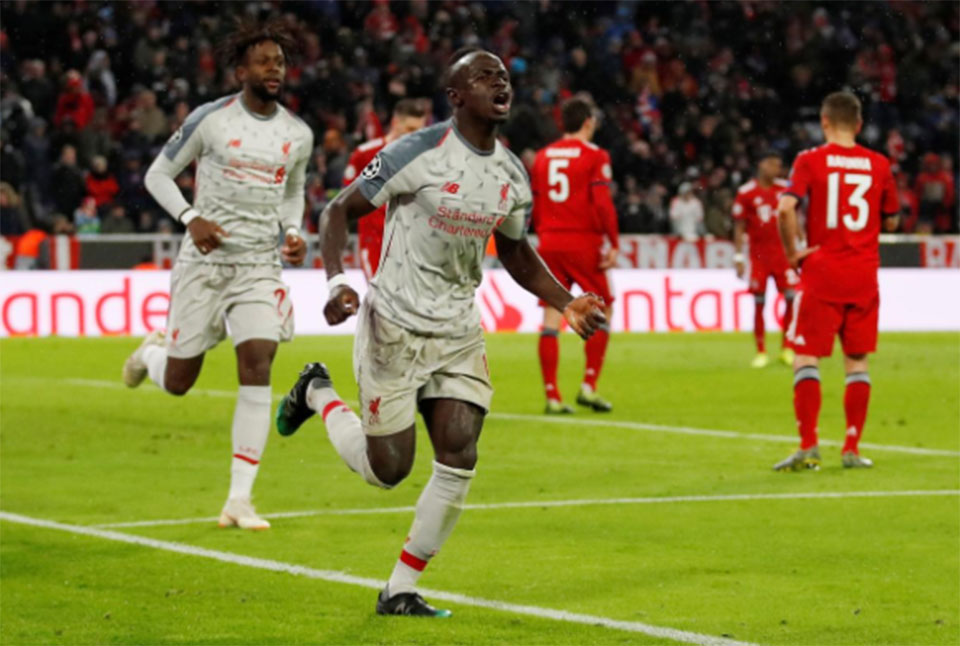 MUNICH, March 14: Sadio Mane scored twice to hand Liverpool a 3-1 Champions League victory at Bayern Munich on Wednesday as they nullified their German opponents with a dominant performance that sent them through to the quarter-finals.

After the last-16 first leg ended goalless at Anfield, five-times European champions Liverpool took control in Munich, bossing the game to become the fourth English team into the last eight with their first away win in Europe this season.

What had the potential to be a thrilling encounter turned into a scrappy affair with both teams making mistakes in possession, but Bayern were prevented from applying sustained pressure and were picked off at key moments.

Mane opened the scoring, pouncing on a needless charge out of his goal by Manuel Neuer in his 100th Champions League appearance, to round the Bayern keeper with a superb turn before chipping his finish into the empty net in the 26th minute.

The German champions levelled 13 minutes later against the run of play when winger Serge Gnabry beat his marker and his cutback was turned into the goal by Liverpool defender Joel Matip.

Centre back Virgil van Dijk, who had missed the first leg last month, killed off any German hopes of a comeback when he rose high to head home in the 69th minute before Mane headed in his second in the 84th.

“It is a wonderful Champions League night for Liverpool again and that is good,” said Liverpool coach Juergen Klopp.

“The desire was outstanding. We’ve laid down a marker tonight that LFC is back on the top level of European football.”

ENGLISH QUARTET
Last season’s runners-up Liverpool completed a full house of English teams in the last eight, the first time this has happened since the 2008/9 season, with Tottenham Hotspur, Manchester United and Manchester City already through.

Germany, however, will be without a quarter-finalist for the first time in 11 years.

Bayern knew they had to be more adventurous than they had been at Anfield, but they were suffocated by Liverpool’s intense pressing in the first half.

“We faced a very tough opponent and over both legs Liverpool were the better team,” said Bayern coach Niko Kovac. “They boxed us in, attacked early and we were not able to break free. We did not have our best day. We were shown our limits.”

“We still have two titles to fight for. We are top in the Bundesliga and in the Cup.”

The Reds, beaten by Real Madrid in last season’s final, suffered an early blow when captain Jordan Henderson hobbled off with an ankle injury.

Mane’s goal gave them the edge but instead of adding to their lead when they had the upper hand, Matip’s own goal let Bayern back into the game against the run of play.

The Bavarians, who had reached the Champions League quarter-finals or better in each of the last seven seasons, needed a second with Liverpool heading through on the away goals rule.

Liverpool, however, kept up the pressure and were rewarded when Dutchman Van Dijk grabbed his third goal in his last four appearances in all competitions.

“Both teams were cautious but the second goal took the wind out of our sails,” said defender Mats Hummels. “Before that it was very tight. But after the 2-1 we just could not turn it around.”

Mane completed a memorable win with a well-timed header after a delightful lofted pass from Mohamed Salah as Liverpool stretched their unbeaten run in Champions League last-16 matches to eight following a 1-0 loss at home to Barcelona in 2007.

LIVERPOOL, March 12: Holders Liverpool crashed out of the Champions League in the last 16 after Atletico Madrid scored three... Read More...