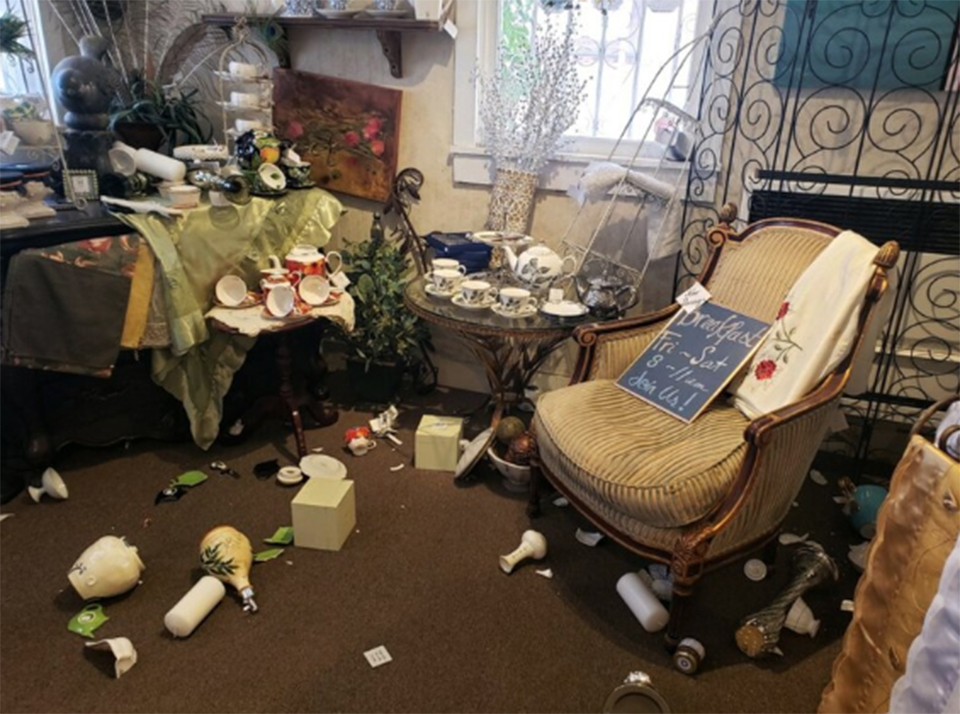 The interior of "My Enchanted Cottage" is seen after an earthquake, Thursday, July 4, 2019, in Ridgecrest, Calif. The earthquake shook a large swath of Southern California and parts of Nevada on Thursday, rattling nerves on the July 4th holiday and causing injuries and damage in the town near the epicenter, followed by a swarm of ongoing aftershocks. (Jessica Weston/The Daily Independent via AP)

An earthquake with a preliminary magnitude of 6.9 has jolted Southern California, but there are no immediate reports of damage or injuries.

The U.S. Geological Survey says the quake hit at 8:19 p.m. Friday and was centered 11 miles from Ridgecrest, where a magnitude 6.4 quake struck on Thursday. The agency initially said the earthquake had a magnitude of 7.1.

The quake was felt downtown as a rolling motion that seemed to last at least a half-minute. It was felt as far away as Las Vegas, and the USGS says it also was felt in Mexico.

If the preliminary magnitude is correct, it would be the largest Southern California quake in 20 years.

Seismologists say there have been 1,700 aftershocks in the wake of the strongest earthquake to hit Southern California in 20 years but the chances of another large temblor are diminishing.

A magnitude 5.4 quake at 4:07 a.m. Friday is so far the strongest aftershock of Thursday’s 6.4 quake, which struck in the Mojave Desert near the town of Ridgecrest.

Zachary Ross of the California Institute of Technology says the number of aftershocks might be slightly higher than average. He also says a quake of that size could continue producing aftershocks for years.

The quake caused some damage to buildings and roads in and around Ridgecrest.

However, seismologists say it’s unlikely the quake will affect any fault lines away from the immediate area, such as the mighty San Andreas.

SAN FRANCISCO, Dec 8: The United States Geological Survey is reporting a 6.5 magnitude earthquake off the coast of Northern California in the... Read More...

Will the budget be a sharp departure from the previous ones?
22 hours ago

Govt presents a budget of Rs 1,474 billion for fiscal year 2020/21 (with full document)
2 hours ago
VIDEO: Post-budget discussion
11 hours ago

Rs 5.02b allocated for displacing improvised cable crossings
14 hours ago