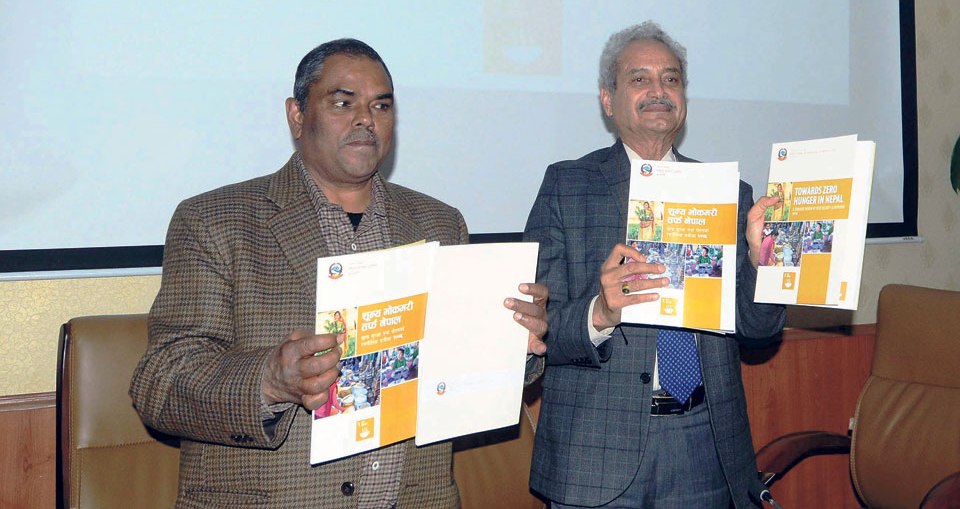 KATHMANDU, Feb 19: The National Planning Commission (NPC) has identified lack of infrastructure and access, along with natural hazards and adverse effects of climate change as the major threats to food security in the country.

Releasing a report entitled “Towards Zero Hunger in Nepal: A Strategic Review of Food Security and Nutrition” on Monday, the NPC said that geographic imbalances in the country have been causing food deficit in some districts, particularly hilly and mountainous regions.

It also called for ‘multi dimensional and multi sectoral’ approaches to eliminate hunger from the country.

The strategic review report was produced following an independent study under the supervision of an inter-ministerial advisory group led by the NPC. It provides a picture of the food security and nutrition status, challenges, opportunities and recommendations towards achieving Sustainable Development Goal 2: Zero Hunger in Nepal by 2030.

“The report identifies the gap and challenges in achieving the SDG 2 to achieve zero hunger by 2030. The main recommendation is to pursue multi dimensional and multi sectoral approaches to deal with hunger,” said Dil Bahadur Gurung, a member of the NPC.

The report was prepared with technical support from the UN World Food Programme (WFP), in collaboration with FAO and UNICEF.

He said that the NPC has also included key recommendations in the 15th periodic plan of the country, while other concerned ministries will also be asked to align their programs to meet the SDG 2.

He said that sub-national governments in the new federal system will also be asked to align their budget and program toward ending hunger.

Among others, the report has recommended the government to introduce programs to increase employment and income of the most vulnerable, disadvantaged and marginalized households. It has also recommended starting a national-level project to provide basic food at subsidized prices to households living below poverty level.

Stating that domestic agricultural production is the main source of food availability in Nepal, it has recommended the government to expand irrigation facilities and increase the coverage of improved seeds and breeds.

Speaking at the launching ceremony, representatives of development partners lauded the initiatives of the government to address the food insecurity and hunger in the country.

“The future of Nepal in respect to ending hunger looks promising,” said Valerie Julliand, the UN Resident Coordinator of Nepal. “As Nepal has moved toward federalism, local units can implement programs to end hunger on their own and as per their needs.”

She also said that the enactment of the Right to Food and Food Sovereignty Act is an important step toward recognizing the rights to eat or rights to food of each citizen of the country.

Dealing with transboundary pests is tricky at the best of times. Standards, practices, capacity levels and engagement vary across countries... Read More...

KATHMANDU, Oct 13: Only seven out of the 21 national pride projects have achieved 50 percent or more progress although their... Read More...