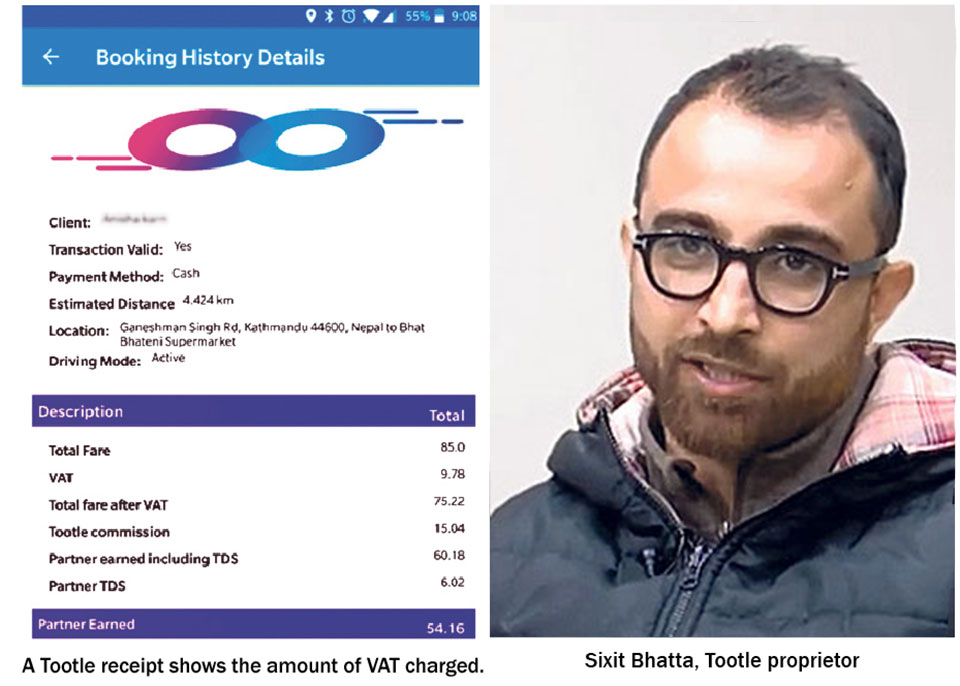 According to the department officials, the department has already directed the offices concerned to start investigation into Tootle. A recent Republica article exposed that Tootle had been collecting VAT from its users while it never paid the amount to the government. The company is yet to be registered for VAT.

“We have already directed the offices concerned to carry out investigation into the case,” Spokesman and Deputy Director General of IRD Yagya Prasad Dhungel said. “We got the information through the news report on the alleged tax fraud and have started our investigation.”

He added that Tootle, if found guilty, will face punishment as per the law and it will also have to pay the VAT amount collected, which will be determined by the department, to the government along with interest and fines.

“We do not yet know what laws they have broken,” Spokesperson Dhungel said.

Chief Executive Officer of Tootle Sixit Bhatta said that the company does not maintain its accounts in accordance with the booking details shown to its riders. “The receipt details we show on the app are different from our accounts,” he said. IRD takes such action as illegal since the company has collected the VAT but not paid it to the government.

Tootle had allegedly collected 13 percent VAT from its riders from January 2017 (since its inception) to July 2018. The company has yet to clarify what it did to the collected amount. Previously, CEO Bhatta had claimed that the company did not include the VAT in its audits although it was charging VAT on the users. Bureaucrats had condemned the conduct of the ride-sharing company as illegal.

Netizens dismayed by Tootle tax dodge
KATHMANDU, Jan 24: In the wake of the Republica exposé on the ride-sharing company Tootle’s defrauding riders by collecting VAT and not paying it to the government, people have taken to various social media to vent their ire. People from various walks of life took to Twitter and Facebook to take Tootle to task.

Bimal Subedi, an aerospace engineer, questioned the intentions of Tootle. He wrote on Twitter “If they don’t have wrong intentions why they collected it [VAT] from public for last 19 months and why they did not pay it to government?”

The company has defrauded its customers, said Sulav Karki, a medical student. He expressed the opinion that the government should step in. “No company should be above Nepal’s tax laws, including Tootle, who it seems has evaded VAT payment to government and basically defrauded the customers.” He wrote on Twitter, “We still don’t know under what legal framework they are operating. Nepal government needs to step in.”

Similarly, software engineer Jitendra Harlalka questioned the current system at Tootle since the deducted amount still remains the same. “Tootle saying that they didn’t know they were required to pay VAT amount to government is just feigning ignorance,” he tweeted. “After July, if they stopped collecting VAT, how does the deducted amount remain same?”

A Twitter handle, Abhijan, supported Tootle as a public convenience but claimed that the company’s services do not exempt it from the law. He wrote on Twitter, “I’ve been using Tootle and it is super convenient, but that doesn’t excuse company’s swerving [away from] legal obligations.”

A Twitter page titled United We Stand claimed that the ride-sharing company was being plain dishonest. The page wrote on Twitter, “You know how to collect VAT from the customers but don’t know it [is] to be passed on to the government? That’s a plain lie and dishonesty.”

Facebooker Sameer Joshi wrote “Tootle’s commission is also too high. Tootle earning should not be above 20 percent of the total bill.”

KATHMANDU, Jan 1: The year 2019 was remarkable for Republica and its readers in many ways. Some investigative stories our... Read More...

In Pictures: Demonstration held in support of Rabi Lamichhane
7 hours ago

Flights at TIA resume after two hours
57 minutes ago