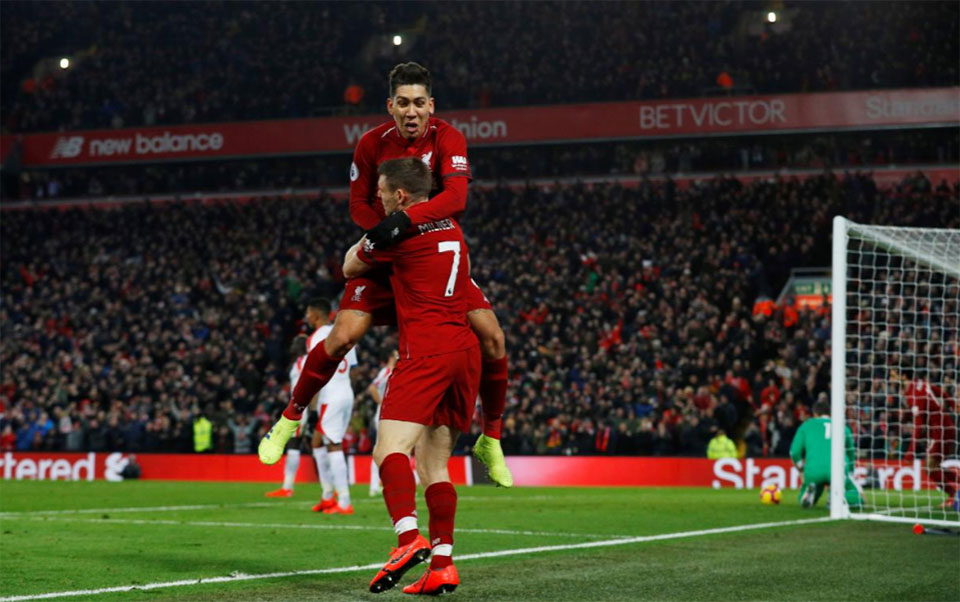 LONDON, Jan 20: Liverpool continued their convincing push for the Premier League title as a Mohamed Salah double saw them repel a severe challenge from Crystal Palace to win a remarkable game 4-3 at Anfield and stretch their lead at the top to seven points.

On another compelling afternoon in England’s top-flight, Arsenal dented Chelsea’s increasingly fragile title pursuit with a 2-0 derby win while Manchester United continued their stirring revival under Ole Gunnar Solskjaer with a 2-1 victory over Brighton & Hove Albion.

Yet it was Liverpool’s pulsating win over their ‘bogey’ side that had the most significant feel as Juergen Klopp’s men showed real steel to subdue Palace, with Salah’s brace taking him to 50 Premier League goals in 72 matches.

Andros Townsend gave the Eagles a first-half lead, offering them the prospect of their fourth win in their last five visits to Anfield, but Salah and Roberto Firmino struck after halftime only for dogged Palace to equalise with a James Tomkins header.

Salah then extended his league-leading tally to 16 goals, gifted by a wretched error by Palace’s recalled 39-year-old keeper Julian Speroni — the league’s oldest participant this season — leaving Klopp to hail the Egyptian’s 50-goal landmark as “an exceptional achievement from a world-class player.”

Even after James Milner was sent off for a second yellow card foul and Sadio Mane made it 4-2, Palace pulled one back through Max Meyer and Klopp felt it was a “massive relief” to extend their unbeaten league home run to 32 matches.

It left Liverpool on 60 points from 23 games, seven clear of Manchester City, who must now play catch-up again by winning at bottom club Huddersfield Town on Sunday.

“Nobody should be surprised by the character of the boys,” said Klopp. “The boys are ready to fight for all. It was not the first moment we had to show it but it was pretty special.”

SOLSKJAER ECLIPSES BUSBY
At Old Trafford, Solskjaer broke the great Matt Busby’s club record by winning his first six league matches in charge — and seven in all competitions — as the Norwegian’s 100 percent start continued with first-half goals from Paul Pogba and Marcus Rashford.

United had to work hard to eke out the win after Pascal Gross narrowed the deficit, leaving Solskjaer to enthuse: “You can’t always play fantasy football. At times we did and it’s a great three points.”

Solskjaer also equalled the longest winning streak by a manager from the beginning of his reign at a club in the Premier League era — six by Carlo Ancelotti, for Chelsea in 2009, and Pep Guardiola, for Man City in 2016.

It pushed United to sixth on 44 points, level with rejuvenated Arsenal, who closed the gap on fourth-placed Chelsea to three points with first-half goals from Alexandre Lacazette and Laurent Koscielny at the Emirates Stadium.

NEWCASTLE WIN SIX-POINTER
At the other end of the table, Newcastle United leapfrogged Cardiff City to push the Welsh club back into the relegation zone after a 3-0 win at St James’ Park that featured a double from Fabian Schar, his first goals for the club.

Like Anfield, Molineux also witnessed a seven-goal thriller, with Diogo Jota scoring a stoppage-time winner for Wolverhampton Wanderers to complete his hat-trick and earn a 4-3 victory over Leicester City in one of the league’s best games of the season.

After captain Wes Morgan’s late header looked to have earned the Foxes a 3-3 draw, Jota’s clincher made Wolves boss Nuno Espirito Santo so delirious that he raced on to the pitch, celebrated with his players and was promptly sent off.

“I tried to avoid going inside the pitch but it is clear and I was sent off for it — and that was the right decision,” conceded the contrite Portuguese.

Southampton also eased their relegation fears under their inspiring new manager Ralph Hasenhuettl, holding on for a deserved 2-1 win over Everton at St Mary’s.

LIVERPOOL, ENGLAND, Oct 3: Liverpool almost paid the price, in embarrassing fashion, for taking their foot off the gas as... Read More...