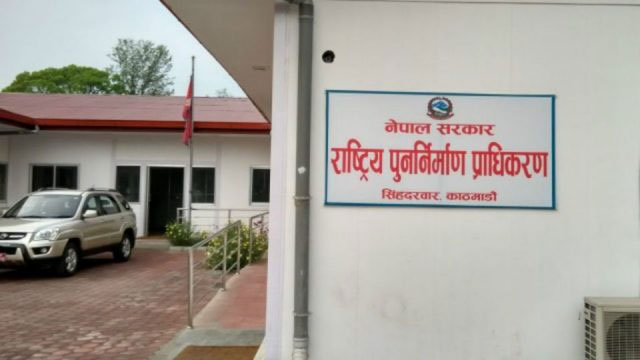 KHOTANG, Dec 6:  After almost four years since the catastrophic 2015 earthquakes, a total of 545 beneficiaries in Khotang district have received the third tranche of the housing grant.

However, many victims have complained of delay in receiving grants. Quake victim Shyam Kumar Thapa of Chuichumma Rural Municipality-5 said the delay by the NRA in distributing the grant has delayed his house construction work.

“Although we have already fulfilled the construction requirement, we have to wait for a long time to collect the tranche,” said Thapa. “Failure to receive the grants on time have forced us take costly loans,” he added.

Failure of the NRA to send engineers for site visit, engineers abandoning their work and delay in data entry during technical evaluation among other reasons have caused the delay.

As many as 133 quake victims are still deprived of the first tranche of the reconstruction grant due to various reasons. Contract in the name of relatives who are abroad, people going abroad after signing contract with NRA, inability of old and handicapped victims to visit the district headquarters have deprived the victims of the grant tranches.

Figures maintained by the NRA show that a total of 13,799 houses in Khotang were completely or partially damaged by the earthquakes.

KATHMANDU, Oct 19: The National Reconstruction Authority (NRA) has asked the beneficiaries of the private housing grant to collect the... Read More...

KATHMANDU, Aug 9: Following the formation of the new government, confusion has surfaced over the distribution of housing grant to be... Read More...