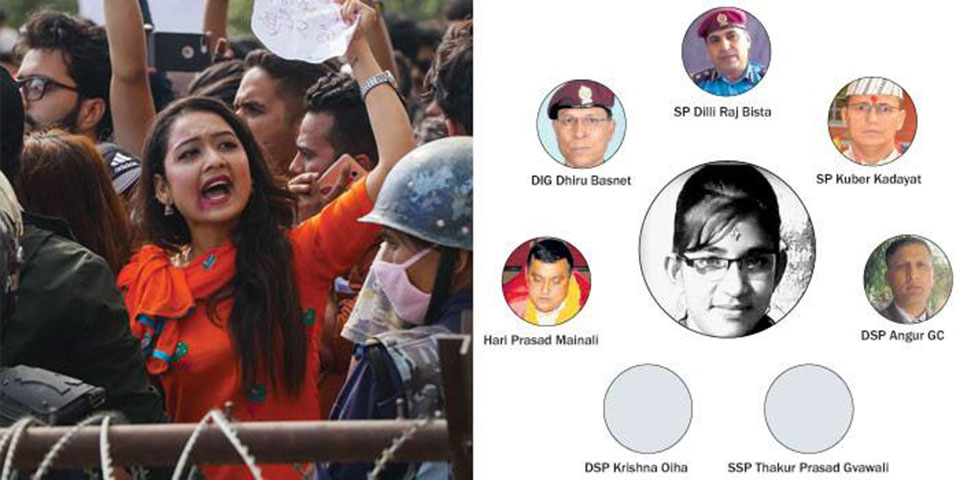 KATHMANDU, Sept 17: Even as it is nearing two months since Nirmala Panta was raped and subsequently murdered and the government formed probe committees one after another, often changing their heads, the committees are still unsuccessful in producing the Kanchanpur teenager’s rapist(s) and murder(s). The criminals are still at large.

Shortly after the 13-year-old girl was murdered on July 26, the then Superintendent of Police (SP) Dilliraj Bista started the investigation into the case in the capacity of the district police chief. Locals, however, protested against SP Bista blaming him for ‘destroying’ available evidences ‘with the intention to ‘protect the real rapists’.

To address the locals’ demands in the context of a teenager already shot dead during protests, the government replaced SP Bista with Kuber Kadayat. Before Kadayat took the charge of the probe as the district police chief, a police team led by DSP Angur GC was sent to Kanchanpur from the Central Investigation Bureau (CIB) ‘to assist the ongoing police probe’.

DSP GC, who was involved in the investigation from the very beginning returned to Kathmandu after collecting the Nirmala’s vaginal swab. He asked the local police not to release Dilip Bista who had earlier been arrested as the suspect, before his DNA was tested.

Again, CIB assigned SSP Thakur Prasad Gyawali to monitor what and how the local investigators were ‘doing in the field’.

In an attempt to address the locals’ demands and calm the protests, the Ministry of Home Affairs (MoHA) formed a five-member probe committee led by Hari Prasad Mainali, the director general at the Prison Management Department.  On Saturday, Mainali-led committee submitted a clueless report to the ministry.

The only thing the Mainali-led committee did is that it recommended to the ministry to suspend five more police officials – DSP Angur Joshi of CIB, DSP Gyan Kumar Sethi, who was at the district police office in Kanchanpur at the time of the incident, DSP Jagadish Bhatta, who was the chief of the area police office, inspector Ekindra Khadka and Sub-Inspector Ram Singh Dhami.

Based on the probe panel’s report, MoHA suspended them immediately.

Apart from changing the heads of the probe committees formed by the police, the government has also mobilized additional police officials to watch over the activities of the probe panels. CIB had deployed a team led by SSP Thakur Prasad Gyawali after DSP GC returned.

Yet, the government formed a probe panel led by Uttam Subedi for the purpose of investigating whether the previous investigators did their job sincerely. DIG Dhiru Basnet was made the head of this committee on Sunday.

The probe panels have been able to do nothing more than suspending a few police officials and the culprits are still  at large.

In Saturday’s meeting, Minister Thapa had proposed suspending 15 police officials working in responsible positions in Kanchanpur. Dismayed with the ministers’ proposal IGP Khanal had suggested against suspending the police officials immediately and said they should be sacked if evidences established their involvement in hindering the probe. IGP Khanal was mainly opposing the idea of suspending the top cops saying such action could demoralize the investigators.

The police headquarters opposed MoHA’s proposal saying no police should be suspended without substantive evidence.

“If you want to suspend the police investigators haphazardly, then suspend me first.  The way we are acting this may affect the investigations,” IGP Khanal had reportedly warned.

Why did police ‘destroy’ evidence?

KANCHANPUR, Sept 17: Monday marks the 53rd day of the rape and murder of Kanchanpur teenager Nirmala Panta. Yet, there... Read More...

KANCHANPUR, Sept 16: Investigators are clueless in tracking those involved in the rape and murder of Nirmala Panta even as... Read More...

BHIMDATTANAGR, Aug25: An appeal has been made to all today to cease ongoing protest and agitation over the murder of... Read More...