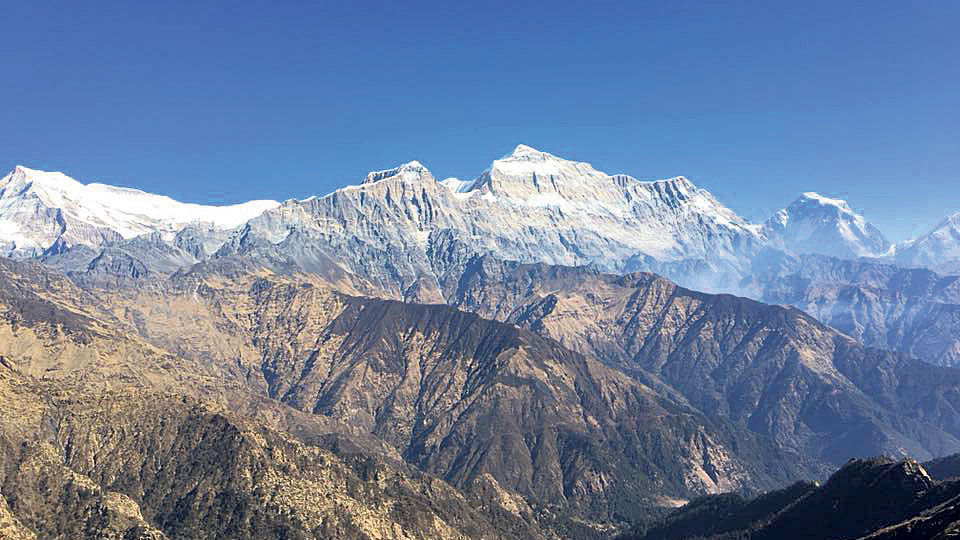 Gurja Himal in Myagdi is seen in this undated photo. Photo: Republica

POKHARA, Oct 31: A team of six foreigners and three Nepali climbers has become the first to stand on the summit of Mount Ghustung (6465m) in Myagdi district.

The team reached the summit of Mount Ghustung on Wednesday. All team members have arrived safely at Gurja village after the successful summit.

According to Jhak Bahadur Chhantyal, chairman of War 1 of Dhaulagiri Rural Municipality, four French, three Nepali and one each Swiss and Canadian climbers have successfully climbed Mt Ghustung.

However, the second attempt to climb Gurja Himal (7193m) has also become unsuccessful.

“Both the peaks were opened for climbers this season only. Though Ghustung has been climbed successfully, the second attempt to climb Gurja Himal became unsuccessful,” Chhantyal added.

Nine members of the first expedition team to Gurja Himal died earlier this month when heavy storm and landslide buried their tents. The team comprised of five South Koreans and four Nepali climbers.

“We are sad that even the second attempt to climb the peak has become unsuccessful,” Chhantyal added.

The second team to attempt Gurja Himal had one Japanese and three Nepali climbers. The team attempted the peak from western side after the first team’s attempt to climb the mountain from southern side ended in tragedy. “But they had to retreat as the route was difficult,” he added.

French climber Peoplo, who is also the leader of the first successful attempt to climb Mt Ghustung, said they were cautious because of the tragic incident on Gurja Himal. “It feels good to become the first to summit the peak. The route was easier. But strong winds and freezing temperature made our climb difficult,” he told Republica over phone from Gurja village.

Peoplo urged the government to promote Gurja village which is the gateway to many peaks in the region.

Chhantyal told Republica that Ghustung is also a small hunting block in the Dhorpatan Hunting Reserve. “One can trek to Baglung, Rukum as well as Dolpa from Gurja. Also, there is a trail to reach Dhaulagiri Base Camp from this village. However, the foot trail beyond Gurja is very difficult. Also, there is no settlement as well as communication facility,” he said.

Stating that the region is a fertile ground for Yarsagumba herb, Chhantyal said that the route can be promoted as ‘Yarsa Trail’.

He also expressed commitment to take needful initiative to make maintain trails around Gurja village so that it is easier for climbing parties. He also added that the local body will take initiative for inviting expedition parties to climb Gurja Himal in the coming seasons.

KATHMANDU, April 28: The Government of Nepal has welcomed the 2018 Inter-Korean Summit at Peace House in Panmunjeom and the issuance... Read More...

China on top as investors pledge $13.52 b at Investment Summit

KATHMANDU, March 3: As the Nepal Investment Summit concluded on Friday, investors from various countries have pledged to invest $... Read More...

Nepal for SAARC summit as scheduled

KATHMANDU, Sept 28: Nepal, the current chair of the South Asian Association for Regional Cooperation (SAARC), has said that it is... Read More...