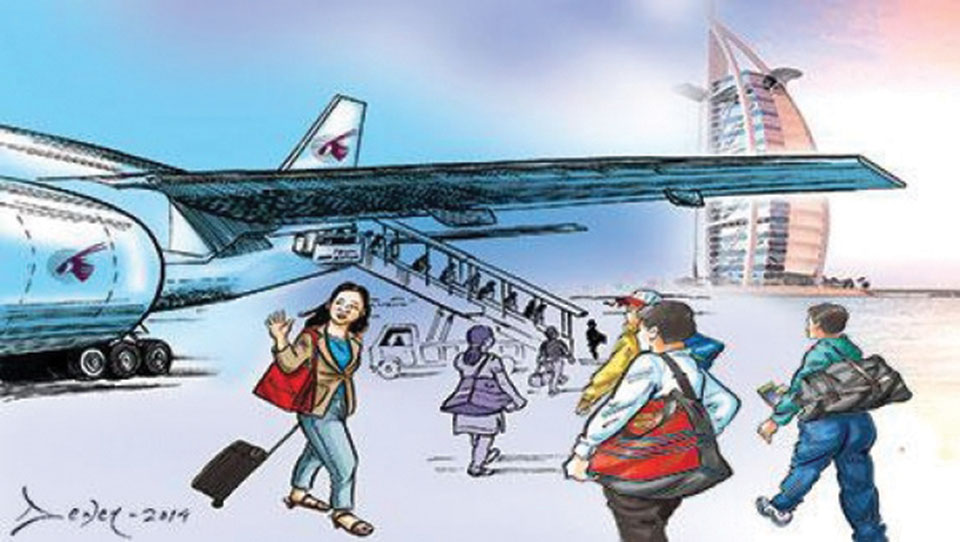 It is very difficult for women to access information on safe migration. Many do not realize the implications of being flown via India or Nepal

There are more and more women migrating for work, which indicates an emerging trend in the pattern of mobility among women.

Why women migrate
Many women migrate because they feel they must. Based on the perception and experience of many migrant workers, foreign migration promises more income than in Nepal. But there is also a fragment of women who are migrating because the idea appeals to them.

Sarita, who is probably in her early 20s and a returnee from Kuwait shares, “I saw the didis and my friends migrating.” It was, as if, trendy to go abroad for work for her. Her urge was further strengthened when she saw a few people come back with increased purchasing power. “I thought it would be easy to make more money abroad, and that I could have a better life after I returned to Nepal,” she innocently shares.

Many female migrants have gone with the expectation that working abroad means easy money. They have taken hefty loans to support their endeavour. In reality, migrating is a cumbersome task for many of them, often filled with risks. They may wind up in different jobs, and sometimes even in different countries from what had been promised. Moreover, most women who are engaged in domestic work while abroad share that they are often unaware of things that might be considered prerequisites for the job—operating washing machines and dish washers, using microwaves and knowing the language.

Associated risks
The risk in migration arises because of a limited access to information on the process of migration, as well as a lack of skills training to equip the migrants with the right skill set.

To top this all, there are many unscrupulous recruitment agents and agencies operating under the guise of ethical recruitment further compounding the problem.

Moreover, although a skills-training is a requirement before migration, many women from remote parts of Nepal opt-out of this “mandatory” training because of difficulties in commuting to the training location. With little regulation and accountability guiding the process, it is easy to get certification for the training one never attended.

Being inadequately prepared for the migration journey at home exposes women to many risks and vulnerabilities while abroad. But regardless of the experience they have while working abroad, many women who migrate once are eager to migrate again.

Temptation to return
“I will definitely go again if I had the chance,” Binita who is a returnee from Qatar shares. She and her husband had made a mutual decision for Binita to go abroad and work. She went lured by the prospect of making a decent living to support her family.  Two years later when she came back to Nepal, her husband was unwilling to accept her into his life. He suspected that she had been physically involved with other men.

As Binita gradually opens up, it is clear that she is fearful that she may be misunderstood in the society. There is a constant speculation over the female sexuality that hinders female returnees from properly reintegrating into the society. “I do not feel accepted here,” Binita said. For many like her, going abroad is also a form of escaping violence and hardships at home.

Cause for concern
Although many women come back in the hopes of starting something of their own in Nepal after their migration experience, the social stigma often discourages them from doing so. The matter is grave because it implies that we may be losing out on skills that women have acquired during their migration journey. For example, many women who come back to Nepal acquire the ability to speak basic Arabic, operate machinery and gain exposure that can prove to be very valuable assets in the labor market.

The matter is also grave when women do not feel accepted in the societies they come from. Stigmatization at home compels women to seek out migration opportunities through any means that is available to them. They then seldom think about the safest and regulated means to migrate. Instead, they opt for the quickest option out of the country with a disregard for the consequences they may have to endure. They then opt to migrate at every opportunity they receive.

(The names in the article have been changed)
basnyat.ayushma@gmail.com