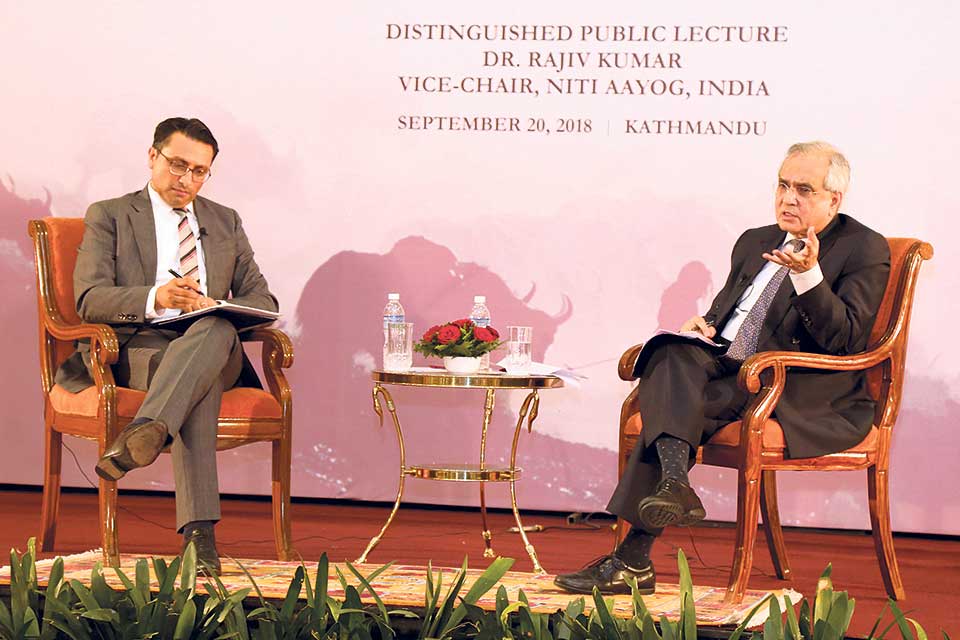 KATHMANDU, Sept 21: National Institution for Transforming India (NITI) Aayog’s Vice-Chairperson Rajiv Kumar has said that the biggest connectivity that Nepal and India need right now is the ‘connectivity of trust’.

The statement of the vice-chairperson of NITI Aayog, which is Indian equivalent of National Planning Commission of Nepal, underscoring the need for connectivity of trust comes in the wake of recent initiatives between the two countries to enhance physical connectivity like railway, road and waterway connectivity.

“The rebuilding of the trust, which was eroded at some point in the past, is a cornerstone for prosperity,” Kumar said, speaking at a public lecture entitled ‘Nepal, India and the Neighborhood: The Promise of Economic Reforms, Innovation and Connectivity’ organized jointly by the Institute for Integrated Development Studies (IIDS), Kathmandu University, and the Barbara Foundation in Kathmandu on Thursday.

Citing some initiatives that the two countries have taken for enhancement of connectivity like feasibility study commissioned for the Raxaul to Kathmandu railway, he said that 5T-- talent, tradition, tourism, trade, and technology -- that Indian Prime Minister Narendra Modi has focused to build India’s brand could become the areas of cooperation with Nepal.

He also said that improvement of connectivity and relationship between Nepal with five bordering Indian states could be beneficial. Highlighting rafts of reform measures executed by India at a ‘breathtaking’ level, he said that they will help make the development a mass movement in India. “The whole South Asia region will benefit from this economic transformation that India is undergoing through,” said Kumar.

He also said that India could also help Nepal for inculcating innovation among youngsters.

KATHMANDU, May 25: Indian envoy to Nepal Manjeev Singh Puri has said that his interest in Nepal is to provide support... Read More...