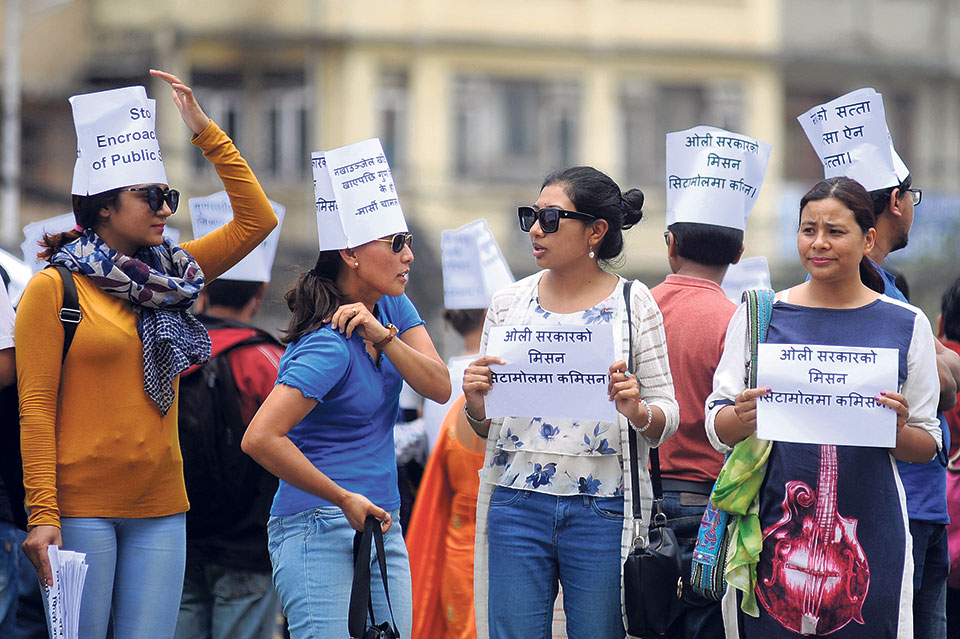 KATHMANDU, July 8: Protests have sparked in Kathmandu in support of Dr Govinda KC, who is staging a fast-unto-death in Jumla, demanding reforms in medical education sector since the last eight days.

Dozens of supporters, leaders and cadres of Bibeksheel Sajha Party and civil society leaders assembled at Maitighar Mandala displaying placards in support of Dr KC, who has also been fighting to ensure peoples' right to freedom of expression.

They came down heavily on the government for introducing medical education bill which benefits private medical colleges and for curtailing civil rights of the general public as well as suppressing dissident voices.

The protesters criticized the KP Oli-led government for assisting medical mafia instead of ensuring the peoples' right to health as stated in the constitution.

“The prime minister himself is taking the lead to benefit media mafia. We won't let him do so,” said Om Prakash Aryal, a leader of BSP, warning that the Oli government won't last long if he continues to work for the benefit of 'media mafia'.

Stating that former CIAA chief  Lokman Singh Karki and ex-chief justice Gopal Parajuli were sacked from their posts despite their defiance, Aryal warned that the Oli government won't last for long if it does not correct its 'authoritarian working style'.

During the protest rally that convened into an assembly at New Baneshwar, participants urged the government to withdraw the controversial bill and table a new one as per the recommendation of the Mathema taskforce, save ailing Ganga Maya Adhikari and respect the peoples' right to freedom of expression.

Various rights bodies and civil society organizations have urged the government to address the demands raised by the agitating Dr KC and Ganga Maya and save their lives at the earliest.

JUMLA, July 15: Nepali Students’ Union took to the streets of Jumla urging the government to back its decision on... Read More...