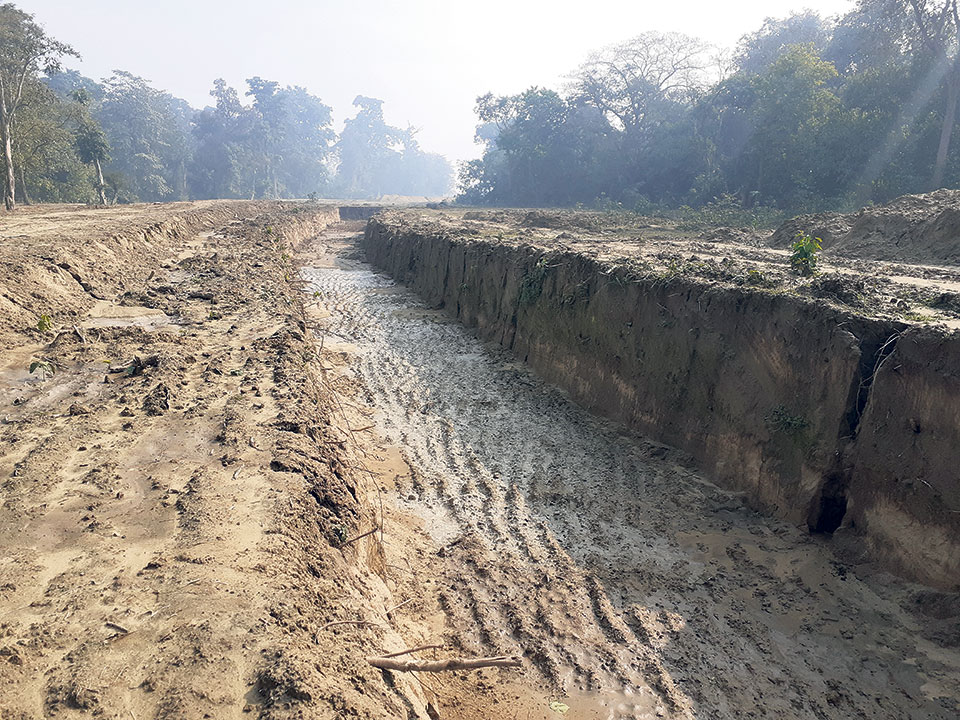 Construction deadline extended by a year

NEPALGUNJ, Jan 15: Only 45% of work on eastern canal of Sikta Irrigation Project has been completed even though the construction deadline expired two months ago.

The project office had awarded the contract to build 53.5-kilometer eastern canal to Kumar Kalika JV on 24 July, 2017. As per the contract, the project had to be completed by November, 2019.

According to the project office, the eastern canal has been designed to irrigate 9,000 hectares of land.

"Construction was affected as we couldn't fell 15,000 trees on time due to delay in approval of the projects Environment Impact Assessment (EIA) report," Nepal argued. "There was a need to extend the project's deadline as some trees are still to be felled."

Nepal also informed that there is no land compensation dispute on first 45 kilometers from the project's headwork. "Beyond that, there are some differences with the locals over the canal's right-of-way. The locals have requested the project office to build the canal near the forest to avoid farmland," he added.

Locals say that the contractor's performance was satisfactory initially. "Later on, they (contractor) became inactive which eventually affected the project's work progress. It is saddening to hear that the project office is extending deadline of the project which should have completed by now," Bal Kishan Tharu, local of Rapti Sonari Rural Municipality-5, said. “Completion of the project would have increased our agro production. We need to wait for one more year," he added.

However, Janak Bahadur Tharu, chairperson of Rapti Sonari Rural Municipality, said the contractor has expedited its work at the project site. "The local unit is extending necessary support and cooperation to the contractor all of us want to see the project completed at the earliest," added Tharu.

The government added the eastern canal in the second master plan of Sikta Irrigation Project to irrigate more farmland in the area. The new canal will benefit farmers of Baijapur in Wards 3 and 4, Binauna of Ward 5, Fatehpur of Wards 6 and 7 of Rapti Sonari Rural Municipality, and Gangapur, Matehiya, Kalaphata, Laxmanpur and Katkuiya of Narainapur Rural Municipality.

JSP decides not to join Oli govt, but ‘not to miss opportunity to form govt under its leadership’
6 hours ago