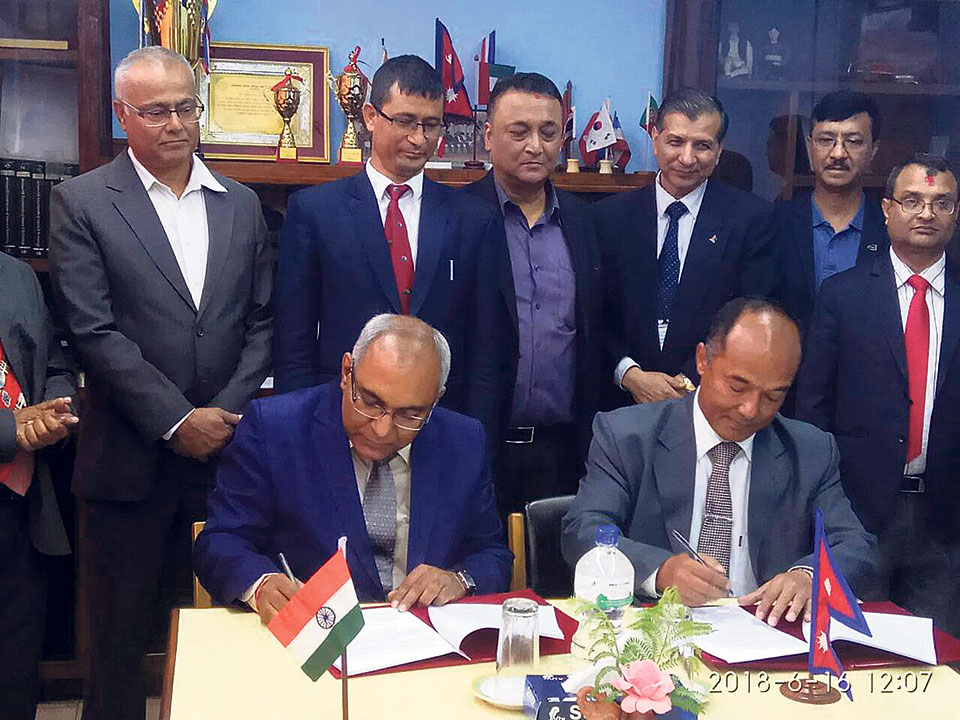 Photo Courtesy: Caan Officials of Civil Aviation Authority of Nepal and the Airports Authority of India sign an agreement on Saturday to provide new air entry routes for Nepal.

No permission yet for high altitute routes over Nepalgunj, Mahendranagar

Following a two-day meeting held in Kathmandu starting June 14, the Civil Aviation Authority of Nepal (CAAN) and the Airports Authority of India (AAI) signed an agreement Saturday on the new air entry routes for Nepal .

However, no decision has been taken about entry routes from western Nepal.

During the bilateral talks, Nepal had asked the Indian side to open western air entry routes over Nepalgunj and Mahendranagar for high altitude international flights . But the Indian side sought more time for taking a decision . During a bilateral meeting between CAAN and AAI on May 12, 2016 also, the Indian side had asked for more time to study Nepal’s proposal to open these routes.

“The meeting held in 2016 had decided to give more time to India to take a decision over the routes but they took almost two years.

So this time we have set a deadline for September,” said Rajan Pokharel, deputy director general of CAAN. By September 2018 AAI will complete the technical assessments and forward a decision to Nepal regarding the Nepalgunj and Mahendranagar high altitude routes for international flights.

“The western high altitude air routes will be significant as they will help reduce distance and fuel consumption,” Pokharel told Republica.

He further said that it is comparatively easier for flights to land at Bhairahawa and Pokhara if they can use high altitude entry routes over Nepalgunj and Mahendranagar . He, however, said that it has been decided to provide low level air entry route permit for the Mahendranagar route although it is a high level route that is necessary for Nepal in the current situation. The government has set a target of upgrading GBIA and Pokhara airport into regional international airports within three years. Under these circumstances the Nepalgunj and Mahendranagar routes are a must for international flight operations at GBIA and Pokhara.

While the new additional routes will help reduce distance and fuel consumption, the low level routes will support cross-border flights, according to Pokharel. “Domestic airlines willing to operate Nepal-India flights will benefit from these new routes,” he said .

Besides, the meeting also discussed air navigation and other technical issues in aviation between the two countries. Pokharel further said that they will conduct flight safety assessment and other required studies on these routes and send their reports to the authorities concerned, including the International Civil Aviation Organization (ICAO). After that, all airline companies will be informed regarding the routes and airlines willing to take these routes can submit their applications. He said these routes might take at least six months to come into operation.

India will build two inns and a ring road in Janakpur: Mukherjee

JANAKPUR, Nov 4: President of India, Pranab Mukherjee, who is on a three-day state visit to Nepal, attended a civic... Read More...