Oli stresses on strong ground for full implementation of budget 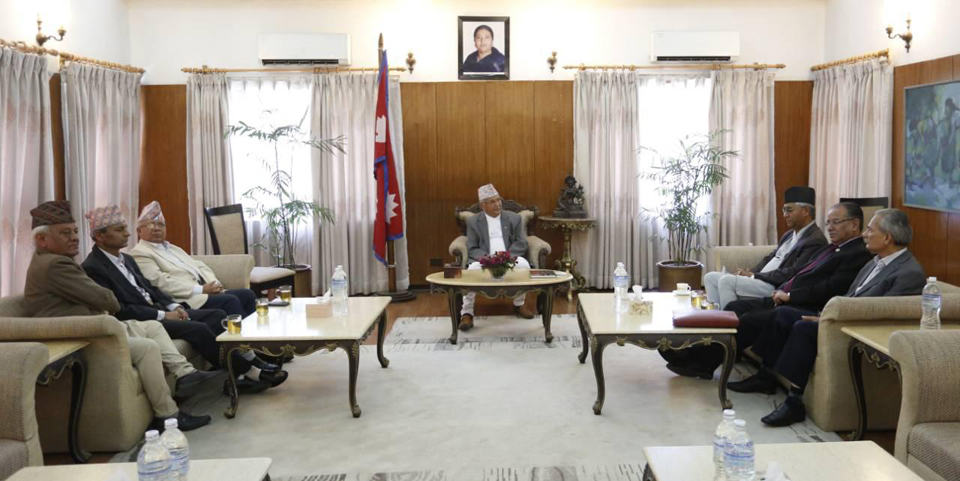 KATHMANDU, June 8: Prime Minister KP Sharma Oli has directed ministers and secretaries to come up with point-wise work plans by coming June 29 in relation to the implementations of policies and programs; and budget prepared for the upcoming fiscal year.

The Prime Minister summoned ministers and secretaries to his office today and directed them to create a ground for ensuring the full implementation of budget from the very first day of upcoming fiscal year (Shrawan 1, 20175 BS).

According to Finance Minister, Dr Yuba Raj Khatiwada, who was present in the meeting, during the meeting they received instructions from the head of the government to develop all required structures, laws and other conditions to ensure the effective enforcement of budget unveiled by the government on May 29.

"People have a great faith on us. It is necessary to formulate plans and create an atmosphere enough for facing needs and demands of a modern era. Passiveness and lack of sense of responsibility on part of employees can't be tolerated," the Finance Minister quoted as saying the Prime Minister.

As stated by Prime Minister's press advisor, Dr Kundan Aryal, the Prime Minister reiterating his commitment to adopting a zero-tolerance policy against corruption, advised ministers and secretaries to leave no stone unturned to fulfill their responsibilities towards the people and nation.

The Prime Minister was of the view that it would hold no meaning for government employments to spend time in palm pleasing to win favor of people in power. He urged them just to believe in competency and work efficiency instead and make no effort to win extra favor regarding their interests for various appointments and for transfer and promotion.

Implementation of ‘ambitious budget’ a herculean task for the government: private sector bodies

KATHMANDU, May 31: While noting that the government may face serious challenges in its implementation in view of the ongoing COVID-19... Read More...

FNCSI welcomes budget, but says implementation is a challenge

KATHMANDU, June 1: The Federation of Nepal Cottage and Small Industries (FNCSI) has welcomed the budget for Fiscal Year 2019/20... Read More...