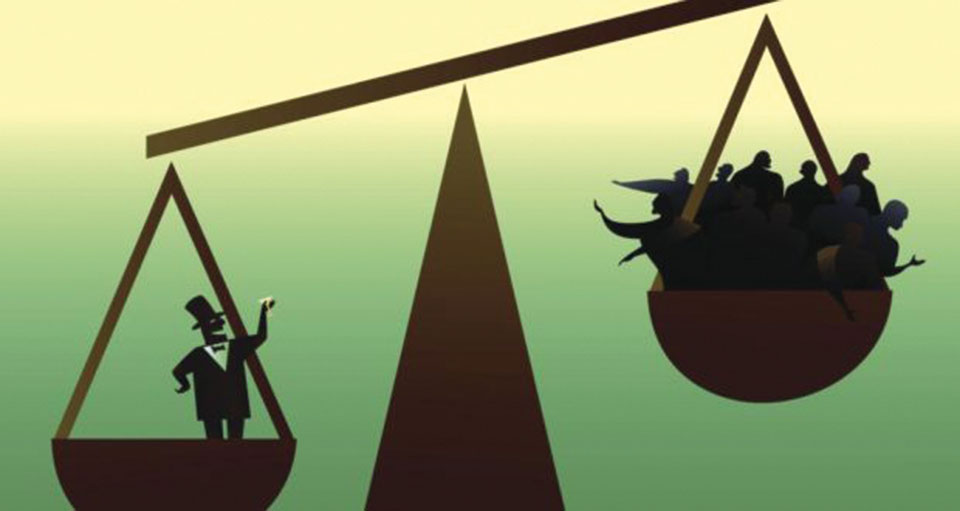 Rise in per capita income does not necessarily indicate growth. It does not mean income of each household has increased

If everything goes as planned Nepal will graduate to developing country status from the least developed country (LDC) in 2022. With the rise in the per capita income, Nepal is more likely to obtain that status along with Bhutan and other African countries. But graduation has both challenges and opportunities for LDC like Nepal.

It is going to be challenging for Nepal because once we graduate we won’t be entitled to the concessions and support we have been receiving as an LDC. Apart from per capita income other macroeconomic indicators determine whether a country is fit for graduation. The government therefore should weigh both challenges and opportunities before making that decision.

Different dynamism
Rise in per capita income has definitely sparked a high hope amidst current economic downturn. Finance Minister Yuba Raj Khatiwada informed a month ago that national coffer is “almost empty” owing to over-expenses in non-productive sectors. Definitely, the country’s economy is not in good shape.

Burgeoning trade deficit, decline in remittance and ever increasing regular expenditure show that our economy is virtually passing through the rough roads. Growth is almost stagnant with inflation of more than 10 percent.

Besides, rise in per capita income does not necessarily indicate growth in people’s income across the country. It does not mean income of each household has increased because so many other factors contribute to Gross Domestic Product (GDP) growth. GDP is the aggregate of different components that include remuneration, labor, profit and rent. It is measured in terms of monetary value. GDP does not measure quality of life, income distribution and environmental damage.

We should understand that rise in per capita income alone does not lead to rise in income in totality. According to Central Bureau of Statistics report, each Nepali will earn $ 1004 in the coming fiscal whereas per capita income of each Nepali in the last fiscal year was $866. Rise in income can be mainly attributed to growth in production of goods and services and decline in population which is almost two percent.

Rise in the income is definitely good news. But if we look at the real economic situation and level of poverty, it is hard to trust CBS report. The CBS claim on per capita income seems exaggerated. How can we believe that each Nepal will earn an average of US$ 1004 (approximately 107,000 Nepali rupees)? For it to be true, our economy should have experienced some trickledown effects already.

Majority of people living in marginal income are becoming poorer whereas rich are getting richer. Plight of people in the margins is grossly ignored. If the earning of average Nepali has increased in true sense, the number of people living below the poverty level should also have declined drastically. Paradoxically, growth does not show any impact on reducing poverty.

The CBS has not given any justifications to its claim. Nobody has raised questions about diametrically opposite outcome. Yes, it is true that Nepali people are getting richer. The per capita income of Nepali that hovered around $700- $750 from 2011 to 2016 had reached $862 in the last fiscal year, the year that witnessed the highest economic growth in more than two decades. But poverty is also rising.

According to 2011 CBS report, more than 25 percent people across the country are below the poverty level. The CBS statistics does not say anything about the people who were pushed to poverty level by devastating earthquakes of 2015. It is said that earthquakes pushed more than eight hundred thousand people to poverty line. The floods last year increased this number further.

Skewed data
On the one hand real poverty is rising. On the other, they say per capita income is rising. Fundamental principles of economics have it that when earnings of people go up, poverty automatically declines. This is not the case with Nepal at the moment.

What does this signify? It is clear that the gap is widening. Only few people who have access to resources are getting rich whereas majority of people are still struggling for survival.

For the past many years, gap between the rich and the poor has remained a defining feature of our economy. The ten percent inflation rate can further reduce middle income class to poverty. Inflation has pushed this class to vulnerable state.

Stitch in time
Rise in earnings of people is good, but rise of population below the poverty line indicates a severe income disparity. The government thus should not delay in formulating policy that helps minimize the gaps. Now we are in the process of institutionalizing federalism. Definitely it is an uphill task to give the country an economic boost immediately. But if we can identify our resources in a proper manner, a desired level of sustainable growth is not impossible. Thus National Planning Commission and CBS need to set a viable goal.

Our economy stands at a very crucial stage. Poverty reduction, sustainable growth and equitability should be the focus of all the provinces. Planners and policy makers should understand the cost of disparity. It makes no sense to aspire for developing country status in the face of burgeoning economic disparity.

KATHMANDU, Nov 3: The Left Alliance has published its election manifesto today. The manifesto highlights the role of Communists in Nepal’s... Read More...

1,432 complaints registered at CIAA HQ in less than a month of current FY
11 hours ago