Merger possible on May 5 if disputes resolved: Dahal 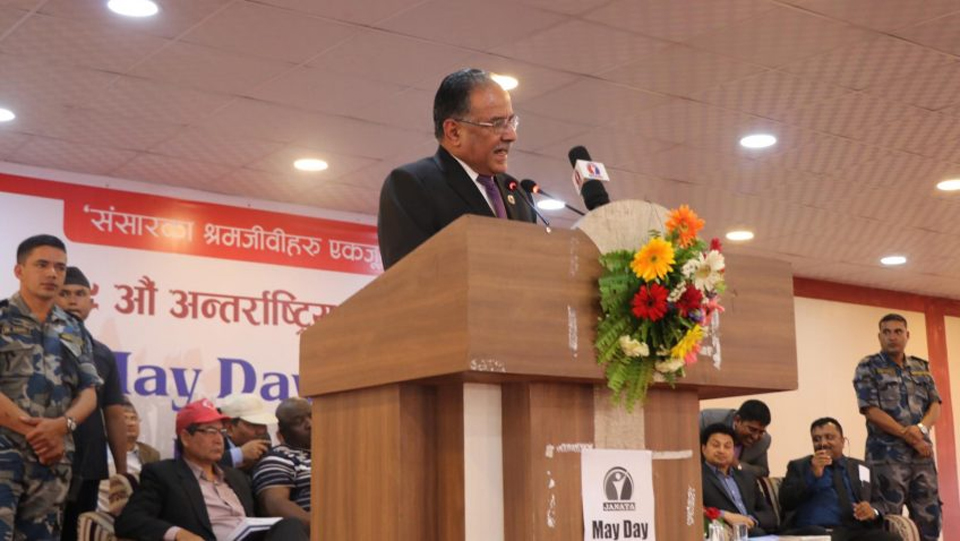 Addressing a program organized to mark the Labor Day in the capital on Tuesday, Dahal said that there was a possibility of formal announcement of the merger on May 5, coinciding with the birth anniversary of Karl Marx.

"There would be decisive talks in one or two days to resolve the remaining differences," said Dahal, adding that leaders from both sides are against further lingering the merger.
The CPN-UML and Maoist Center, the first and third largest parties in the parliament, have not been able to conclude the merger process due to differences over power sharing.

Dahal, according to his close aide, has insisted that chairmen of both parties should have equal power on the party and the government. In the recent one-on-one meeting with Prime Minister and UML Chairman KP Sharma Oli, Dahal had asked the latter two choose between the party chairmanship and premiership and added that he should get opportunity to run the party for five years if Oli runs the government.

The UML had turned down the proposal, according to UML Secretary Yogesh Bhattarai. He said that the first general convention would elect the leader of the unified party.
In an alternative proposal, Dahal has proposed to rotate the two posts between them. UML leaders have not made their views public on the proposal.

In his address, Dahal reiterated that the merger had reached to a point of no return and stressed on the need of consensus and compromise to resolve the disputed issues.  He said that the unification between the two communist parties was the need of the time and was endorsed by the voters.

"People's aspiration for political stability, development, and prosperity need to be fulfilled," said Dahal, adding that the merger would end an era of instability and create a right environment for economic growth.

"This is an opportunity to deliver on the people's aspiration for progress and prosperity."

KATHMANDU, May 4: The unification talks between the ruling CPN-UML and CPN (Maoist Center) seem to be gaining momentum as... Read More...

KATHMANDU, April 29: Despite top leaders' claim that the planned unification between the CPN-UML and the CPN (Maoist Center) had reached... Read More...