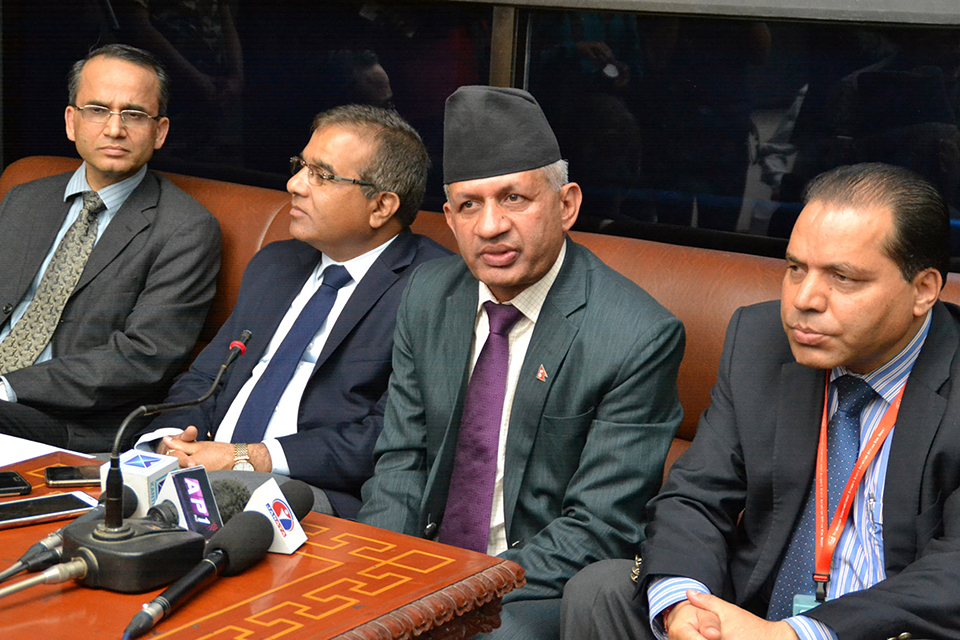 KATHMANDU, April 22: Minister for Foreign Affairs Pradeep Kumar Gyawali, who returned home on Saturday wrapping up his five-day official visit to China, said that he has requested the Chinese side to construct the much-talked-about cross-border railway between the two neighbors under a grant.

“During our bilateral talks, we have requested the Chinese side to build the cross-border railway under the grant aid as a symbol of bilateral relations between the two neighbors. However, we are open for discussion about possible investment model for the infrastructure,” Gyawali said, speaking to reporters at Tribhuvan International Airport.

“There can be several investment models for the implementation of projects under the framework of the Belt and Road Initiative. But for the cross-border railway, our request to the Chinese side was that they help us build the infrastructure under a grant,” he said.

The Nepal-China Cross Border Railway line, which is to stretch from Keyrong of China to Kathmandu and from Kathmandu to Pokhara and Lumbini, is estimated to cost up to USD 8 billion.

Minister Gyawali said that both sides have reached an understanding to conduct a feasibility study and preparation of the Detailed Project Report (DPR) for the Nepal-China Cross Border Railway line at the earliest.

“I was asked by the Chinese side if my visit aims to lay ground for the prime minister's visit to China. I said the aim of my visit is not just to lay ground for high-level visits between the two neighbors but I am also here to discuss many other bilateral issues,” he said, adding that his visit was fruitful as there were detailed discussions in terms of exploring new areas of bilateral cooperation under the frame work of the BRI.

Minister Gyawali also said that both sides have agreed to implement all the past agreements signed between the two countries, including the agreements made by Prime Minister KP Sharma Oli in 2016 and by the then Prime Minister Pushpa Kamala Dahal. The Transit and Transport Agreement and the MoU on launching a joint feasibility study for a Nepal-China Free Trade Agreement are the key documents signed during Oli visit during his first stint as the prime minister. Similarly, the Dahal-led government had signed a Memorandum of Understanding (MOU) on cooperation on the Belt and Road Initiative (BRI).

“We have also agreed to set up a bilateral coordination and implementation mechanism for the effective implementation of all the projects implemented through the Chinese support,” he added.

During his visit to China, Gyawali had also held meetings with provincial leaders in Chengdu and delivered a speech at a program held in his honor at Sichuwan University before his arrival back home on Saturday.