office of the auditor general report 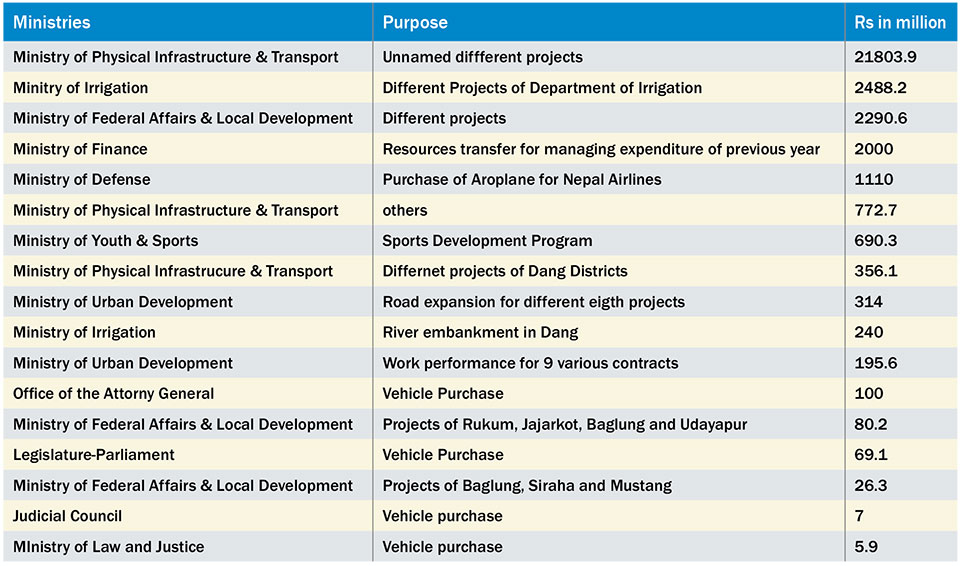 KATHMANDU, April 15: It has been learnt that the Ministry of Finance had doled out projects with resources assurances, worth Rs 32.55 billion, mostly in the eleventh hours in the Fiscal Year 2016/17 in piecemeal basis.

About two-thirds of these amounts were spent on roads. Hundreds of road projects worth Rs 123 billion were commissioned across the country. Such projects were contracted out on multi-year terms, completely breaching the budgetary system.

These are the revelations made by Office of the Auditor General (OAG) in its audit report for the Fiscal Year 2016/17, made public on Thursday.

An excerpt of the OAG’s 55th report says: “Such budget was allocated as per demand, and this is against the Appropriation Act, Financial Directive Act. All such spending is against the principle of budget.”

Auditor General Tanka Mani Sharma said the two mega budget distributions were done outside of the parliament, and without justifying rationality, which showed a height of budgetary indiscipline in project selection.

Ministry of Physical Infrastructure and Transport has distributed additional Rs 21.8 billion on road projects out of Rs 32.55 billion, followed by Ministry of Irrigation with an allocation of Rs 2.48 billion. According to OAG’s compilation, Rs 1.1 billion was provided to Nepal Army for purchasing a new aircraft while Rs 1.8 billion was paid to provide motor vehicles for Office of Attorney General, Legislature Parliament and others.

Minister for Finance Krishna Bahadur Mahara and his other cabinet ministers had also taken away budget from the heading ‘miscellaneous’ to woo their voters in the upcoming elections. According to a story published by Republica last year, a total of Rs 5.05 billion were directly allocated to the constituencies of the erstwhile ministers. These constituencies included the one in Chitwan district from where erstwhile Prime Minister Pushpa Kamal Dahal contested in the election of house of representative and his daughter Renu Dahal for the post of Bharatpur Mayor.

Khatri further said: “The financial indiscipline has taken toll on state coffers when finance ministers are illiterate or semi-literate on the matters of financial matters and budgetary principles.”

The impact of these indisciplines in the budget are huge particularly on the priority projects as the Ministry of Physical Infrastructure and Transportation faces resource crunch to foot the bills of national pride projects.

DHADING, July 22: Nilkantha Municipality of Dhading had allocated Rs 140.2 million for construction of roads and bridges during the... Read More...

KATHMANDU, July 5: The government's treasury surplus has hit Rs 221 billion mainly due to its failure to spend. ... Read More...

Police refuse to register complaint against Rabi Lamichhane over passport case
20 hours ago
Ruling alliance on the verge of collapse over new president, home ministry row
6 hours ago
UML in favor of reinstating Lamichhane as Home Minister, Maoist Center opposed to the idea
22 hours ago

Fugitive arrested from his house in Jumla
36 minutes ago