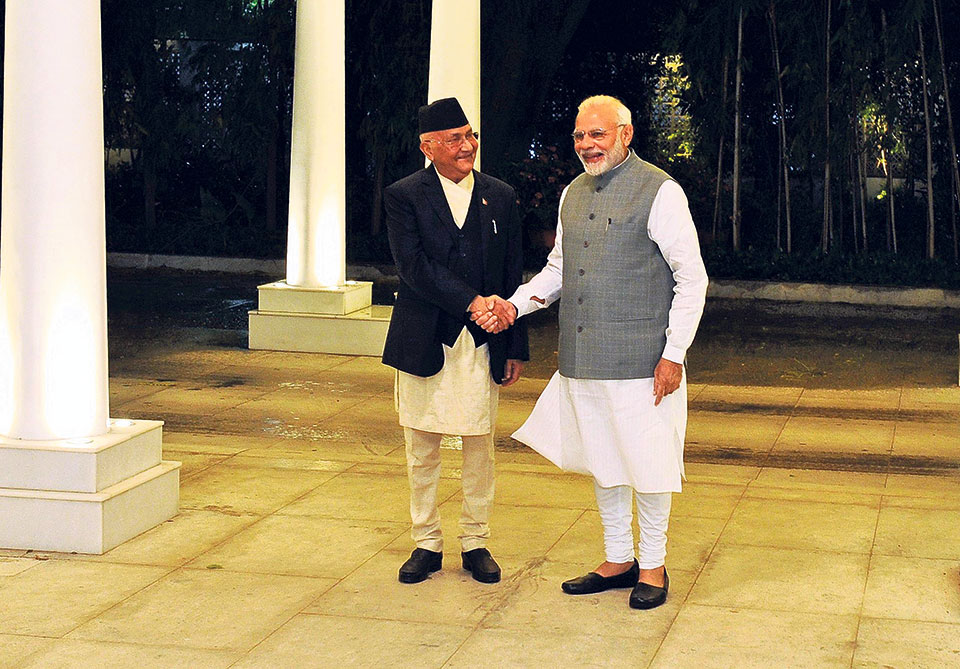 Immediately after this, Prime Minister Oli, who held an informal one-on-one meeting with  Indian Prime Minister Modi   on Friday evening, is scheduled for an official meeting with his Indian counterpart. Although the Ministry of Foreign Affairs (MoFA) has said that the joint inauguration of the Integrated Check Post at Birgunj by the two prime ministers is on the agenda, officials said negotiations are still underway for signing a few other key agreements.

Sources said the Indian side is likely to announce the expansion of its railways up to Kathmandu during the bilateral meeting between the two prime ministers. The two  are also likely to reach some agreements on agricultural research and development, educational trainings and exposure visits and on exploring the possibility of inland water navigation up to an Indian port--something that Prime Minister Oli is personally  keen to develop as an alternative means of transport.

The prime minister  said that he is not keen on reaching any new agreements with India, but rather  favors bringing into implementation the agreements that were reached earlier. Officials said he is scheduled to discuss  various issues including the long-stalled Pancheshwar Multi-purpose Project, energy cooperation, the Arun III and Upper Karnali hydropower projects and speedy release of the Indian reconstruction grant and soft loan.

Removal of non-tariff trade barriers and the expansion of market access  for Nepali products in order to reduce the ballooning trade deficit with India, the questions of LPG gas bullets, exchange of demonetized Indian currency notes and additional air routes via Indian airspace are also on the   discussion agenda between the two prime ministers.

Prime Minister Modi will host a banquet luncheon in honor of Oli after the bilateral meeting on Saturday. Prime Minister Oli is scheduled to interact with the intellectual community at a civic reception to be organized by the India Foundation on Saturday afternoon. The Indian home minister, external affairs minister and senior leaders of various political parties  are  paying courtesy calls on Prime Minister Oli the same day.

Prime Minister Oli addressed a gathering of businesspersons from both Nepal and India, where he took the opportunity to court Indian investment in Nepal. The prime minister also held an interaction with the Nepali community  in India and assured them that the relations between Nepal and India are improving despite some hiccups in the past. Separately, the prime minister addressed a diplomatic reception hosted by the Embassy of Nepal in New Delhi in his honor Friday evening.
Earlier in the day, a delegation of the Indian National Congress party including its President Rahul Gandhi and former prime minister Dr Manmohan Singh paid a courtesy call on Prime Minister Oli. The INC leaders are learnt to have expressed concern over the troubled relations between the two countries in the past and discussed ways to improve these relations in future.