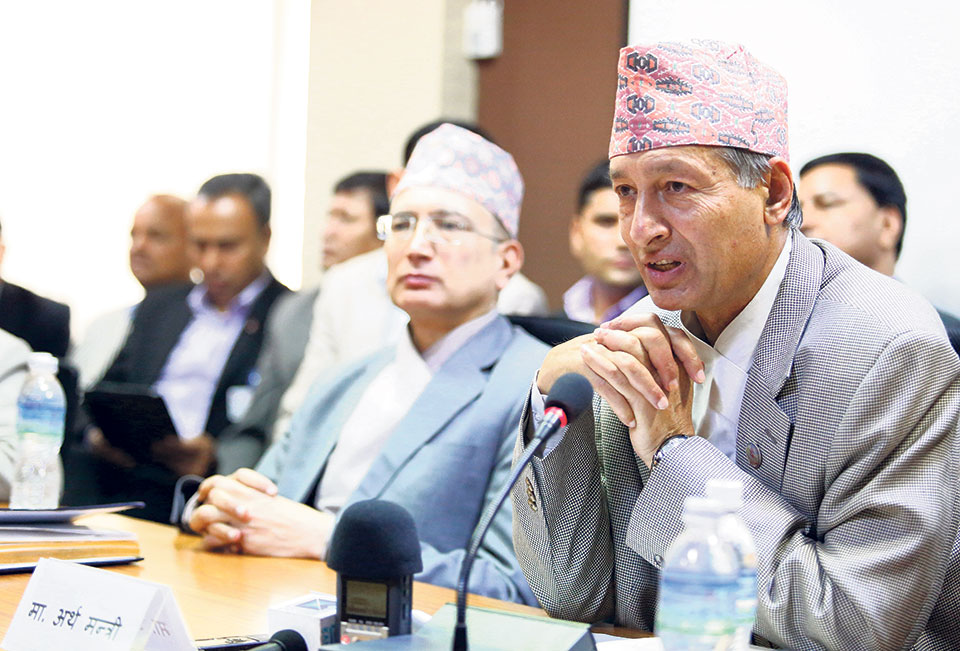 KATHMANDU, April 1 : The white paper on Nepal’s financial situation released last week by Minister for Finance Dr Yubaraj Khatiwada states that the yearly budget for pensions and retirement benefits will cross Rs 300 billion in the next 10 years. The paper states that the past five years have seen an increase in pensions by 156 percent.

The government had allocated nearly Rs 27.1 billion as the budget for pensions and disability allowance in Fiscal Year 2015/16. This exceeded to Rs 38.89 billion in the last fiscal year, increasing by a staggering 43.57 percent. The estimated pensions and disability allowance budget for FY 2017/18 is Rs 46.86 billion, and this projection is 20.5 percent more than the total expenditure of last fiscal year.

Experts claim that the Contributory Pension System (CPS) is the only way that Nepal can cut costs while giving pensions to former servicemen of the country.

“The pension system that the nation currently follows is the Defined Benefit System (DBS). This has been very expensive for the nation as not only does the government have an enormous workforce, but also the former servicemen receive pension for a longer period than before as the life expectancy of the people has increased,” stated Krishna Hari Baskota, former secretary of Ministry of Finance. Baskota added: “For the next few decades, the burden of pension amount for the country can only go up as the current servicemen cannot be stripped off their existing facilities. However, with efficient and quick planning, the government’s expenses for pensions can be minimized.”

“It is essential that the government adopts CPS as this will make the employees contribute a certain percent of their salary to their pension fund. Just like how servicemen accumulate large sum in their Citizen Investment Fund account over time, they will also contribute a certain percent of their salary for their pension,” stated Baskota.  This way, the government will not only have a source of income which can be used to fund the pensions of current pension seekers, but will also lessen the burden of the government to contribute for the entire pension amount,” he added.

Seconding Baskota’s statement, Bimal Wagle, former government secretary said, “The idea of CPS has caught attention of Nepali economy experts since —998/99 fiscal year. A framework had also been created in FY 2005/06 which had been submitted to the cabinet to pass. However, no decision as such has been made by the government even after more than a dozen years have passed.”

Wagle further expressed his views toward the necessity to make the structure of the government ‘slim’. “The government recklessly announces vacancy for employment. And without much homework the government has brought the Voluntary Retirement Scheme, and these decisions have been constantly increasing the liability of the government,” he stated.

According to Wagle, a civil servant gets his retirement at a young age of 50 and starts receiving pension, which was previously at 58. While he is able to further work for eight more years, the government recruits staffs in his stead. That way, the government is constantly increasing its liability every year.

The number of public servants is enormous. This includes support staffs and peons, technicians and professionals that are not essential for the everyday work of these offices and these staffs are only required occasionally. Baskota says, “Those staffs that can be hired from outsourcing such as gardeners, photographers, typists and other support staffs can be given contracts rather than hiring them permanently.”

The government has also allocated budget to bring agro programs that could attract youth to agriculture. At the same time,... Read More...

To touch or not to touch the clock

KATHMANDU,   Dec 29: We are all set to welcome a New Year in another three days. Everyone’s excited and... Read More...