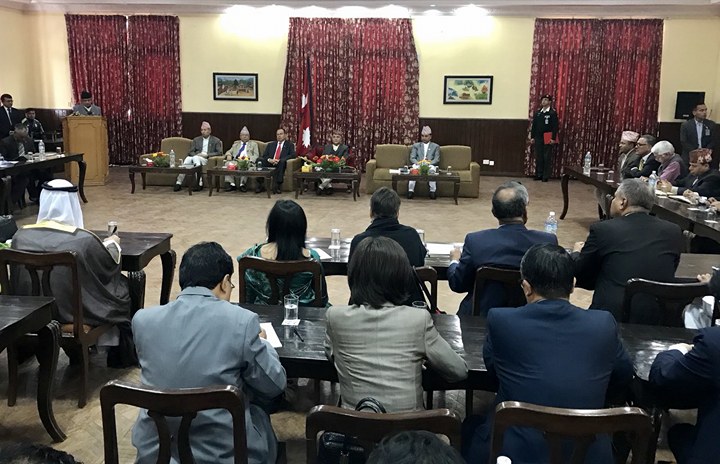 KATHMANDU, March 28: Prime Minister K P Sharma Oli has said that all the activities of his government shall be founded on the six fundamental pillars for achieving the motto of “Prosperous Nepal, happy Nepali”.

In his remarks to Kathmandu-based diplomats on the major policies and priorities of his government at a luncheon Tuesday, Prime Minister Oli said the  pillars of his policies and programs shall be nationalism, territorial integrity and national independence, and th efulfillment of national interests.  He described nationalism as the protection of sovereignty.

“Pursuit of national interests and fulfillment of international obligations go hand in hand. This comes as a non-negotiable priority for us. We will serve this cause on the basis of our values, realities and aspirations,” the prime minister said.

Brushing asides  allegations made by the opposition parties that his government was bent on establishing a totalitarian system, Prime Minister Oli said the second pillar of his government's plans and policies was to safeguard democracy and the fundamental freedoms of the people. “We believe that democracy is irreversible and no one can snatch it now from us,” he said. “We hold this very dear and will not allow any compromise on democratic norms, values and principles.”

The prime minister mentioned that sustainable peace and prosperity based on equality and stability, progress and development are two other pillars of his government's policies and programs. “We have learnt hard lessons from our own experiences what the price of instability would be. Any attempt to undermine peace and stability will not be tolerated at any cost and will be dealt firmly and resolutely,” he said.

During the luncheon meeting  at his official residence at Baluwatar coordinated by the Ministry of Foreign Affairs (MoFA), the prime minister also mentioned that the new government had a strong commitment to good governance and this would continue to guide the policies, programs and activities of the government. “With an end to the protracted political transition, the exclusive focus of the government now will be to fulfill people's aspirations for broad-based, inclusive and sustainable development,” he said and also spoke of his resolve to overcome the vicious cycle of poverty.

On foreign policy priorities, Prime Minister Oli said that promoting the image of Nepal at the international level as a State that is practicing comprehensive democracy as well as advancing  Nepal's cause of socio-economic development will remain the priority of his government. The overall engagement of the government with other countries will be directed by the principles of Panchsheel, non-alignment, the UN Charter, international law and the norms of world peace, he said.

Prime Minister Oli also said the motto of his government shall be “amity with all, and enmity with none”. Arguing that development imperatives at home will be the guideposts for  diplomatic engagements abroad, the prime minister further said that building Nepal's image as the land of diverse and bountiful resources will be the goal of the government.

KATHMANDU, Oct 29: The Federal Alliance has drawn the attention of the government towards forwarding the talks with the Alliance... Read More...

Expansion of financial access a must for economic development in Province-1: NRB study
10 minutes ago

EU, UNFPA announce to continue their collaboration to combat GBV in Nepal as their two-year project concludes
12 minutes ago