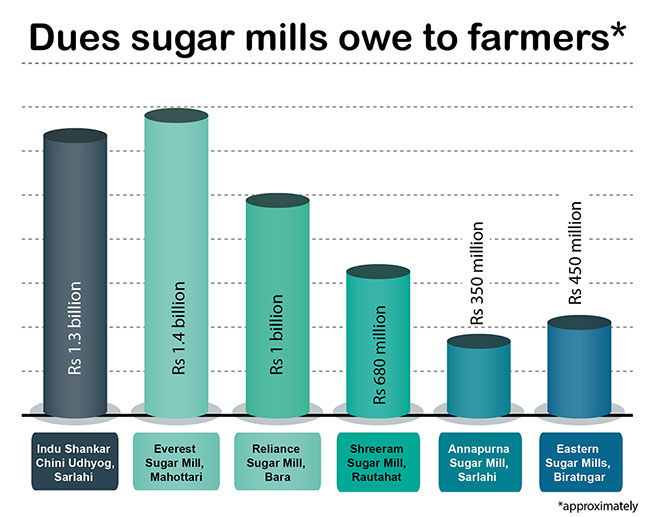 KATHMANDU, March 26: Sugar mills, including those that have not paid farmers for sugarcane, purchased many years ago, have pledged to settle their dues with farmers at the earliest.

Mill operators made the pledge after Minister for Industry, Commerce and Supplies, Matrika Prasad Yadav, warned of action against sugar mills not paying farmers on time.
The decision has come as a relief to farmers who are waiting for payments from the mills for their crop sold many years ago.

Mills were found not paying farmers or making partial payment despite selling sugar produced by them.

During a meeting with sugar mill operators and representatives of farmers held on Saturday, Minister Yadav had threatened to mobilize police personnel to arrest mill operators if they failed to come up with payment schedule immediately.

Talking to Republica on Sunday, Minister Yadav said: “Initially, sugar mill operators had refused to come forth with payment schedule. But they agreed to release payments after I warned them of needful action.”

Ministry officials say almost all the mills have, through letters and telephone calls, promised to begin distributing payments to farmers from April 5. The ministry, however, has not received such letters from ill operators as Sunday was a public holiday, Yadav added.

Sugar mills started delaying payments to farmers from 2009 when farmers waged a series of strikes demanding fair price for their cash crop. As a result of the protest, the government started fixing minimum support price for sugarcane. This is probably the first time that a sitting minister has warned sugar mills, who have been making huge profit by leaving farmers high and dry, of strong action if they failed to pay farmers on time.

President of Nepal Sugarcane Producers Federation Kapil Muni Mainali, who also attended the meeting with on Saturday, is hopeful that farmers will receive payment on time this year. “But I am still not confident because mills have been given about two weeks to start payment,” he said.

Mainali claimed that sugar mills owe farmers a total of around Rs 9.5 billion.
“I was aware of the fact that farmers were not receiving payment from mills on time for the past many years. It happened because the past governments did not pay attention to woes of farmers,” he said, adding: “I have also asked mill operators to inform the ministry if they have any problem.”

Shashi Agrawal, chairman of Nepal Sugar Mills Association, could not be reached for comments despite Republica's repeated attempts through phone calls and text messages.

FARMERS TO GET RS 536.56 PER QUINTAL
Meanwhile,  Minister for Industry, Commerce and Supplies, Matrika Prasad Yadav, told Republica that sugarcane farmers will get Rs 536.56 per quintal this season.

Crushing season begins from mid-November and continues till April.

Nepal had produced 130,000 tons of sugarcane in the last season. Sugarcane production is estimated to reach 170,000 tons this year as many farmers are attracted toward this crop due to the attractive price of last season.

Fugitive arrested from his house in Jumla
18 minutes ago