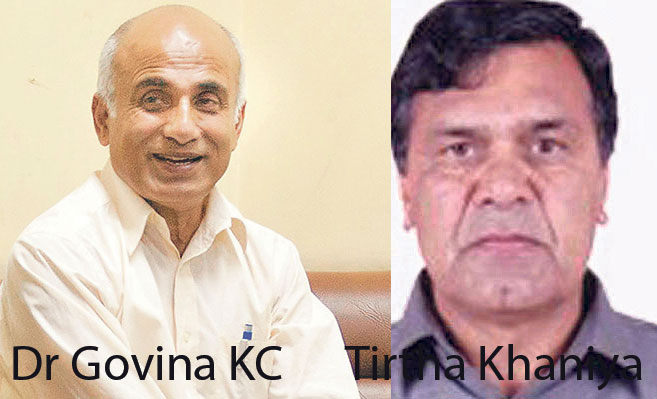 According to people close to Dr KC, the anti-corruption crusader has now taken aim at Dr Khaniya.

"Dr KC's mission to remove CIAA chief Lokman Singh Karki and CJ Parajuli has been successful," Dr Abhisekh Singh, a doctor who has always supported and accompanied Dr KC in his anti-corruption crusade, said, “He now wants TU VC Khaniya removed, which has been one of his longstanding demands.”

Dr KC, who has been fighting against the anarchy in the medical education sector, dauntlessly demanded the resignation of Karki, former chief of the Commission for the Investigation of Abuse of Authority (CIAA), CJ Parajuli and VC Khaniya for “protecting the medical mafia, damaging the health sector and depriving the ordinary people of quality medical education and health services.”

Dr KC has launched a series of hunger strikes since 2012 to press for his demands.

While Karki was pronounced ineligible for the post of CIAA chief by the Supreme Court in January 2017, Parajuli was relieved as the CJ by the Judicial Council earlier this week.

"Our next move is to urge the government to get the Medical Education Ordinance approved by parliament, bring reforms to the medical education sector, publish the report submitted by the panel led by Gauri Bahadur Karki and take necessary action as per the recommendation of the report," said Dr Singh, “Now the government has to remove Dr Khaniya, a longstanding demand of Dr KC.”

Demanding the resignation of CJ Parajuli, Dr KC had staged his 14th fast-unto-death on January 8.

Dr KC staged his 12th hunger strike from September 25, 2017, demanding that the government sack TU officials, including VC Khaniya, who granted affiliation to the controversial Kathmandu National Medical College, and revoking TU decisions that snatched rights of the TU's Institute of Medicine to grant affiliation and seats to private medical colleges.

The Medical Education Probe Commission (MEPC) headed by Gauri Bahadur Karki, former chairman of the Special Court, had recommended to the prime minister to suspend 43 officials of TU, Kathmandu University and Nepal Medical Council for irregularities while granting affiliations to medical colleges. Senior neurosurgeon Dr Upendra Devkota and Surya Prasad Gautam, joint-secretary at the Ministry of Education, are the members of the MEPC.

Ex-PM Bhattarai takes to streets in support of Dr KC

Fugitive arrested from his house in Jumla
19 minutes ago