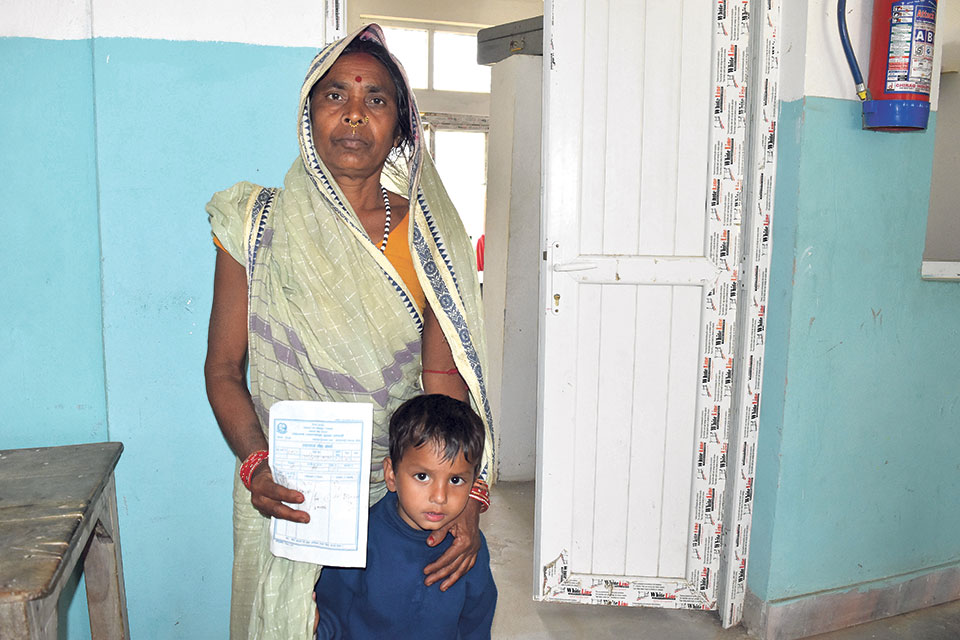 Ghuranidevi Thakur going to a medical store to buy medicines prescribed by a doctor for her grandson.

SIRAHA, March 16: Rambilas Yadav of Mirchaiya-8, Phulbariya sustained a deep cut to his hand while collecting fodder on Tuesday. He immediately rushed to a local health post for treatment. As his cuts were deep and serious, he was referred to Mirchaiya-based Primary Health Center (PHC). He reached there around 3:15 pm but the center had already closed by then.

Rambilas told Republica that the emergency room, OPDs and all other departments were closed. Not even a single health worker was present there. He went to one of the three pharmacies in front of the PHC to inquire about the health center. Assistant Health Worker Ranju Yadav informed him that the health center usually gets closed after 3 pm.

"When we go to health posts, we are referred to well-equipped health centers and when we reach there we often have to return home without treatment," laments Rambilas.

He informed that there are two government hospitals in the village but it's hard to find doctors and health workers there. "If in case we find the doctors, we can't find medicines," he added. As a result, they have to go to other villages or treat their wounds and illness at private clinics.  "Lack of inspection at government hospitals have resulted in negligence and carelessness," said Rambilas.

Though the locals had expected that the hospital services would get better after the local elections, they have become worse instead. "At least, we were provided with some free medicines earlier. But even that has stopped after the arrival of elected representatives," he shared.

There are no medical staff in this government hospital. Two medical staff - Jitendra Gupta and Mohammad Lal Rain - who had been appointed in contract basis have remained absent. While Gupta has gone abroad for study, Rain is busy with his training. The position for health assistant is currently vacant.

Similarly, Ghurandevi Thakur of Bariyapatti-3, who had reached to a government-run local health center for treatment of her grandson, was handed a paper with a list of medicines to buy from private medical stores. Her grandson was suffering from viral fever. "What is the need of government hospitals if we have to buy even common medicines from the medical stores?" she questioned.

Few days ago, Janakidevi Paswan of Bhagwanpur reached to a local PHC clutching her 13-month-old son who was also affected with viral fever. She too was handed with a list of medicines and told to purchase them from medical stores. "The assurance of the government to provide free treatment and medicines for poor people like us has been nothing more than a myth," she laments.

Furthermore, there are tools and equipment for medical treatment in most of the health centers but there isn't any capable manpower to handle the equipment.

SC team off to Georgia without seeking govt approval

RAJBIRAJ, Jan 24: Topa Health Post is just five kilometers away from the district headquarters Rajbiraj of Saptari. Although the government... Read More...