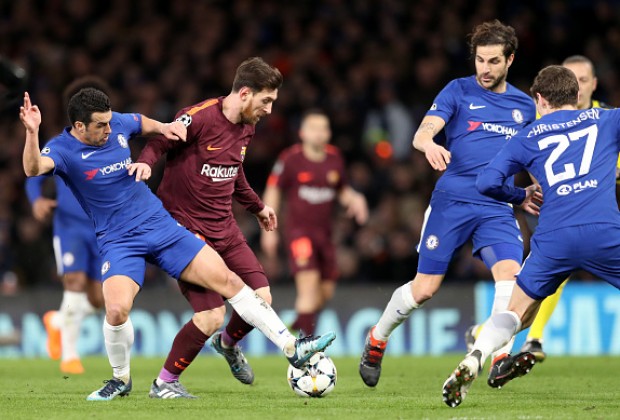 KATHMANDU, March 13: Barcelona hosts Chelsea at the Camp Nou on Wednesday looking to book a place in the quarterfinals of the UEFA Champions League having held the reigning English champions to a 1-1 draw some three weeks ago in London.

Barcelona has had a series of inconsistent performances lately, the most questionable one of the lot was on the first of March when it played a frustrating 1-1 draw at Las Palmas. It then defeated Atletico Madrid 1-0 and Malaga 2-0 in the league, but the performance against the capital side was far from convincing, but somehow, it won. All thanks to Lionel Messi freekicks against Atletico and Las Palmas.

Boasting the best defensive record of conceding just two in the Champions League so far, including a goal against Chelsea, Barcelona will surely be on its best at home with its defensive prowess.

Chelsea, meanwhile, recovered from the poor performances against the two Manchester Clubs, when it lost 2-1 to United and 1-0 to City, both away, beat Crystal Palace 2-1 at home and is now on fifth place with 56 points and eight games to go. Losing four times away from home out of the eight losses. Chelsea surely has to be on its best to overcome this balanced Barcelona side, which simply doesn’t concede more goals.

Barcelona has only conceded 13 goals in the league so far and is cruising towards the La Liga title. The Catalan side has an advantage of that vital away goal, and will surely be in a mood to attack from first to the last minute. Chelsea is expected to play a defensive game as it did the last time against Barca, and hit them on break in which it scored the first goal of the tie through Willian.

Now, both the teams are prepared, and all the eyes are in this clash with nothing to separate these two teams and all to play for.

Team news
Barcelona will be without Denis Suarez and Nelson Semedo who are out with groin and hamstring injuries respectively, while Andres Iniesta is back in training after facing a hamstring problem against Atletic.

Barcelona might as well field Marc-Andre ter Stegen between the sticks, while Roberto and Jordi Alba will play in the right and the left back roles respectively. Gerard Pique and Samuel Umtiti will most likely start in the center back positions.

Barcelona will surely field Sergio Busquets and Ivan Rakitic in the middle of the park, while Ousmane Dembele could start given his form in the last two or three games, along with either Paulinho or Iniesta.

The forward line might as well be the same with Lionel Messi and Luis Suarez.

For Chelsea, Antonio Rudiger is injured with a thigh problem, but the returning date is not sure, so he might also feature, while David Luiz and Ross Barkley are out with ankle and hamstring injuries respectively.

So, Chelsea might start with Thibaut Courtois on goal, along with Cesar Azpilicueta, Andreas Christensen and Rudiger in the center back roles.

The midfield might be of Ngolo Kante, Cesc Fabregas in the middle of the park and Victor Moses and Marcos Alonso as wingbacks.

The forward lineup might be of Eden Hazard and Willian, while either Olivier Giroud or Alvaro Morata will play or Hazard will play as a false nine, assisted by Willian and Pedro Rodriguez just behind him.

Head-to-head
Chelsea and Barcelona have faced each other 12 times in the past, with the English team winning four times, Barcelona winning just two, and six ending in draws.

In the last eight meetings between these sides, Chelsea has won three and five matches have ended in draws.

In the 2009 semi-final first leg, it was a 0-0 draw in the Camp Nou, while the second leg was a 1-1 draw in the Bridge, which saw Barcelona cruise towards the final on away goal and win it 2-0 against another English team Manchester United.

In the 2012 semifinal, Chelsea won the first leg with a 1-0 scoreline at home, and it drew 2-2 at the Camp Nou and reached the final that time, which saw Chelsea lifting the title with a 4-3 penalty shootout win over Bayern Munich.

Lately, Barca and Chelsea played a 1-1 draw at the Stamford Bridge three weeks ago.

Recent form
Barcelona is unbeaten in 35 La Liga games and just needs four more wins to break the previous longest-unbeaten record which is currently held by Real Sociedad, who was unbeaten in 38 league games from 1978-79 to 1979-80 seasons.

So, the home teams might be bursting full of confidence, but it has to stay within its bubble, otherwise, Barca may lose this game as it did in 2012, when Chelsea made Barca suffer in the semis. The bubble might crack, considering its Chelsea.

Meanwhile, Chelsea needs to work very hard to upset Barca given its form and will need to put a lot of effort in attacking prospects as well, not just the defensive game.

Chamundabindrasaini to get electricity for the first time

DAILEKH, Mar 7: Despite being declared as a municipality during the federal restructuring of the state,   Chamundabindrasaini of Dailekh lacked... Read More...