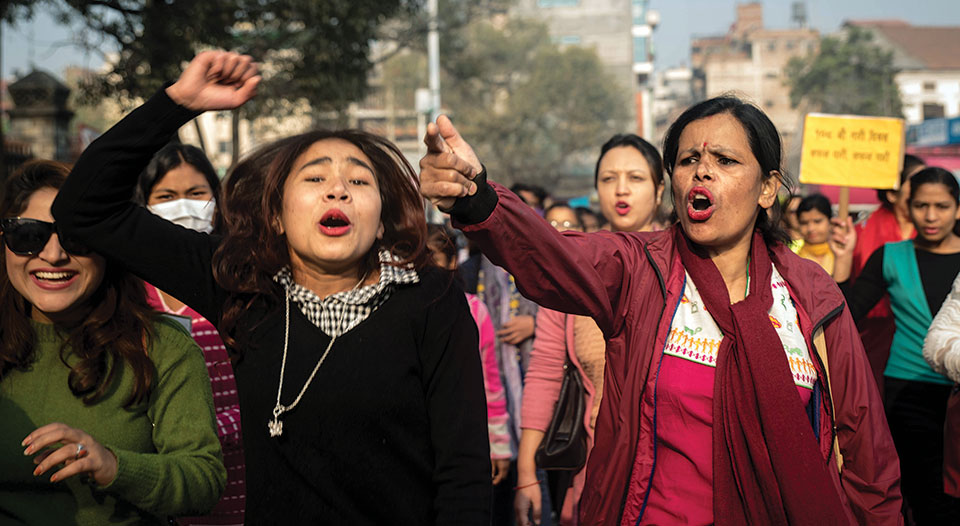 A  woman’s karma is said to be broken when she is widowed, or separated from her husband,”   a friend of mine wrote to me when she got divorced at the age of 21. I could feel her depression behind these words. Yet I could not imagine the kind of societal pressure and reactions she faced. It disturbed me to be part of a modernizing time and still not be justified of what was right and wrong in the eyes of our society. Such demeaning stigma and culture are even deeply practiced when it comes to the case of a widow. This was experienced by another friend of mine who got widowed in a road accident at the age of 26, and had to raise her two years old daughter by herself.

My memories of when I first felt prejudiced to be a female started when my mother’s side of family always came second to my father’s side of family. Whenever there was an event or a religious occasion, my family meant my paternal side of family only, while my mother’s side was as per special invitation only. I thought biologically both side of family should be equally important to the children of the parents. Being just a child, I had started to feel an extreme sense of unfairness and disappointment in how we lived as a society. Much later, I realized that it was more cultural than personal wishes.

Gender biased syndrome
One of gender biased syndrome that we all are very aware of is marrying girls off at an early age, which is before they officially turn into an adult. The reason as we have learned is that girls are more of a burden to the family than boys. While efforts have been made to bring awareness on the human rights value of such practices, we have not been able to bring about a more effective mechanism of curbing those guilty of such practices. This biased syndrome further expands into the roles of a daughter-in-law. While some have been more fortunate than others, many still have had to emotionally cope with the duties of age-old traditions when it comes to ‘do’s and don’ts’ for married women living in religious countries like Nepal. While traditions make our culture rich and teaches us certain value-system, it should not be used to suppress personal happiness. This has also been known to be one of the reasons several married Nepali couples living abroad do not return to live in Nepal.

When my widowed friend was raising her daughter, she was fortunate to be in the safe hands of her parents. However, she realized that no matter how hard she tried to hide from society, she could never escape their nosy eyes and words. She truly felt what it meant to be ostracized for something that she did not commit, and felt even more sorry for her little girl who would have to grow up feeling abnormal because of this unfair depiction of their lives by others. Many looked down upon her saying that she will remarry within a couple of years because she will not be able to fulfill her parenting role without her husband. This was even more painful for the fact that whatever they were saying, it was geared to the fact that she was a female. After six years of being an independent mother, society has finally started respecting her and the reason is because she has chosen not to remarry.

Because of the way society has treated a widow like her, she has vowed to groom her little girl to be an independent woman who does not need to be in the safety net of a man. She has chosen to move on with graceful strength when others could not wish her such. She has been an example of what self-empowerment is; empowering oneself to not live in the restrictions of social norms for the purpose of serving certain beliefs, of which there is no legitimization.

My greatest revelation and disappointment has been in the fact that we women are the proponents of making the lives of other women miserable in the name of societal norms. The strict customs that women have helped impose on other women have been too perplexing for the younger generations. A reason for this may be because some women of older generations are less educated and financially dependent on their male counterparts.

Women’s role
We, women, are also responsible for changing the current reality. And this is by changing our mindset towards other unfortunate women, and by showing our male counterparts to respect women as well. Changing the future of women also means having more competent women representing us in leadership positions and advocating for equality.

While we do have our deeply rooted family customs and values that we cannot immediately get rid of, I must say that I have been amazed by many male counterparts who are feminist and working in their own ways to fight for upliftment of women in our society. On the positive side, women have also been proving that they can be financially independent as seen by the high number of migrant female workers and entrepreneurs in the past decade. There have also been an escalating number of women in the traffic police, in the Nepali army and other such male-dominated careers. Nepal’s political system has acknowledged the need for women representation to ease the destitute situation of half of our population. Similarly, more women are stepping up into the political frontline though their own livelihood constraints cannot measure up to the aptitude of their male counterparts. These are excellent signs for a developing country like ours, progressively advocating for the need of women for our betterment.

While I am proud of our country for making major steps in the issues of women, we still have much more to overcome in our general mindset concerning females. On the surface it may look like we have empowered women, but the psychological scars that we are also creating, may be an unlikely barrier for our overall societal development. I would like to honor the women who have silently suffered, lost against our society, and yet, against all odds are graciously recoloring the world bright for future generations.

The author is a central committee member of Bibeksheel Sajha Party

People usually go to gym for two reasons: either to lose weight or to start bodybuilding. On occasions such as... Read More...

KATHMANDU, Dec 13: Demand for camera-based phones has increased in recent years in Nepal, according to mobile phone traders. The launch... Read More...

Back in school I used to love those light abridged classics, short and sweet, just the way I fancied them... Read More...